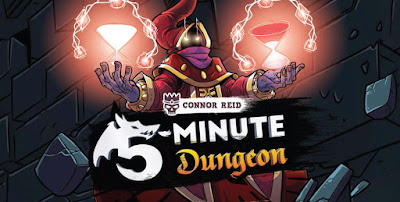 Back in 2016 I backed a Kickstarter campaign, 5-Minute Dungeon. The KS actually delivered ahead of schedule which is very rare these days. I meant to blog about this last year, but kept getting distracted.

This is a fun game.  It is a cooperative game, and all players work towards defeating the dungeon. Each player is a hero, and has his own unique deck of cards. The "Dungeon" is a deck of cards that you defeat one "door" at a time. You flip over a card(open a door) and you need to defeat that card using your players Hero Deck, before you can move to the next door. Once you defeat the last door, you fight the boss which is a lot harder. You only have 5 minutes to do it, using a custom timer app on your phone. That's it, very simple, but crazy hectic fun.

Here is a How to play video:


If you didn't get in the Kickstarter, it is available with a retail edition. There's only a couple of KS exclusives missing. But for a limited time you can get the Original Kickstarter edition.

They just launched an expansion Kickstarter for 5MD. It is a short 14 day campaign. You can just get the expansion, or get the whole thing. The original KS edition and the expansion.

Get in on the KS here: 5-Minute Dungeon, Curses Foiled Again, Expansion.

I will be jumping on this Kickstarter.

I finally finished all the painting for the OWAC. The last unit to be painted are the Chaos Knights. I've held off on these guys because I could not find all the bits to complete the unit. I lost the Standard Bearer figure. So I bought a figure off ebay to replace my lost guy.

The figure arrived in early April and I started painting early as opposed to waiting till the last week. I got the bases done, started the riders and started in on the horses. Then I just ran out of steam. I stopped working on them, or I was busy or I was playing Overwatch(my latest video game addiction). Anything but painting.

Finally in the last week, after some encouragement from the other painters in the challenge, I got back to work. I finished on the last day, of course. Got some pics and I was done!!!

Here are the knights. I will do a wrap up post with all the units in a few days. 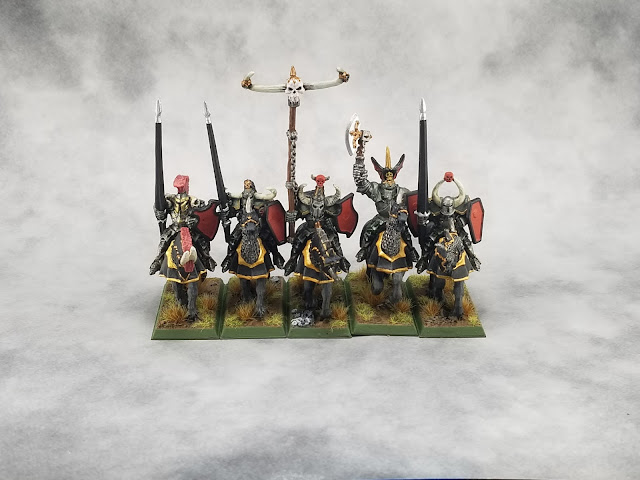 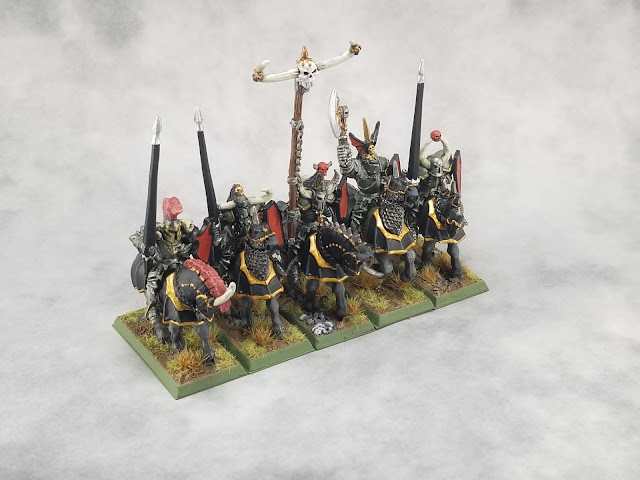 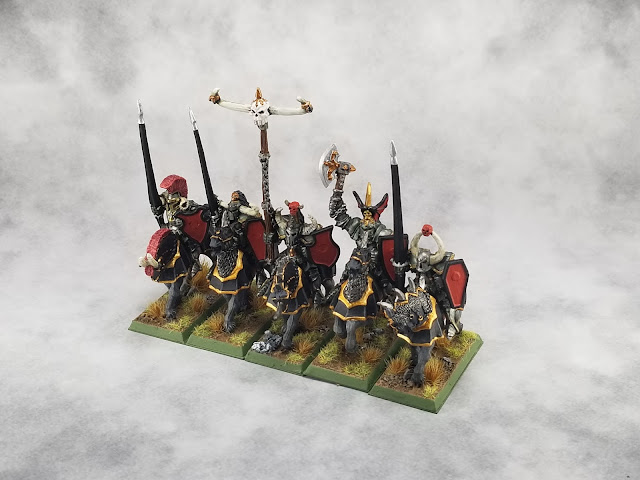 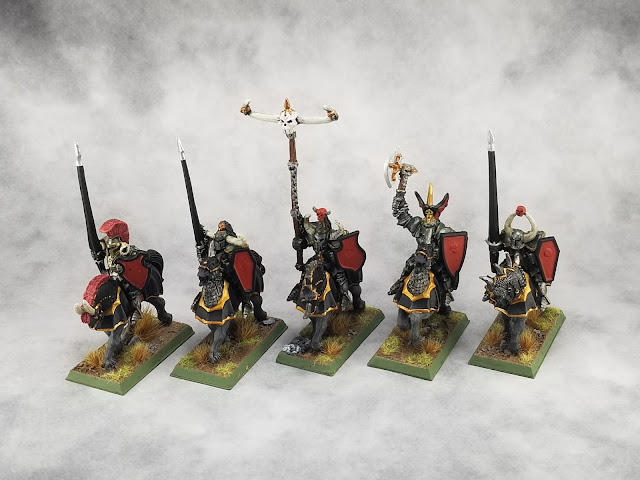 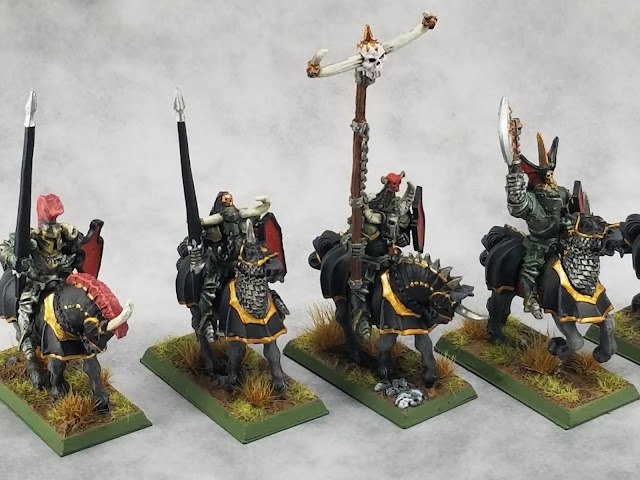 I didn't paint a design on the plain shields as I can't do that to save my life. I will either buy some transfers or ask a friend to paint them on. What a fun challenge. We have already talked about doing it again, but not too soon. What a great way to motivate  you to paint. I now have a 1000(more like 1300) point chaos army, that I didn't have 6 months ago.

Trying to catch up on posts I meant to make months ago...sigh.

Anyway, here is March's entry to the OWAC.

I finally finished my Chaos Warriors. These guys I started back in December, but had to take my mulligan that month. Then I did my Jan and February submissions I went with Dragon Ogres and Harpies. The OWAC is almost over and so time to get back to these guys.

I held off on them for so long as I was not sure how I wanted to paint them. While I love the look of GW's painted figures from back in the early day, bright, bold and garish, that is not my style. So I wanted a little more subdued paint scheme. In the end I did not get some new inspiration, but painted them to match the Chaos Knights I had already painted. Here we go. 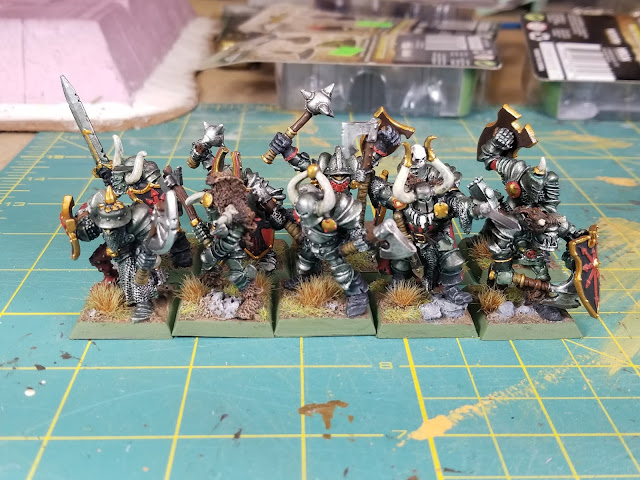 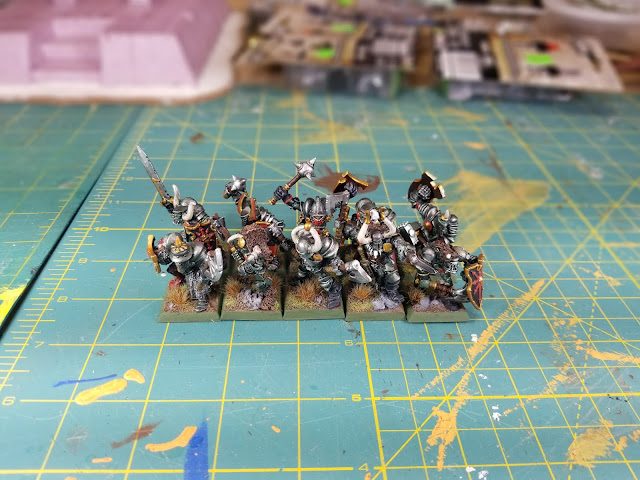 These guys are big, I had to play a lot of mix and match to get them to fit together base to base in formation. 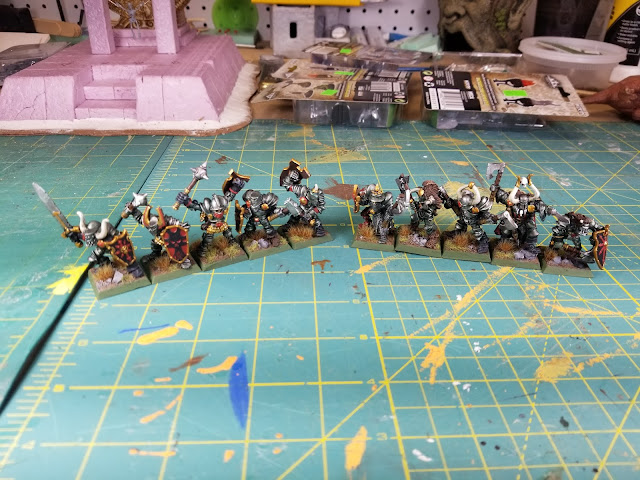 I didn't paint any specific command figures. These guys are pretty bad ass all on their own. Though I think I see at least one, maybe two champions in there. I can run them as one unit or two. 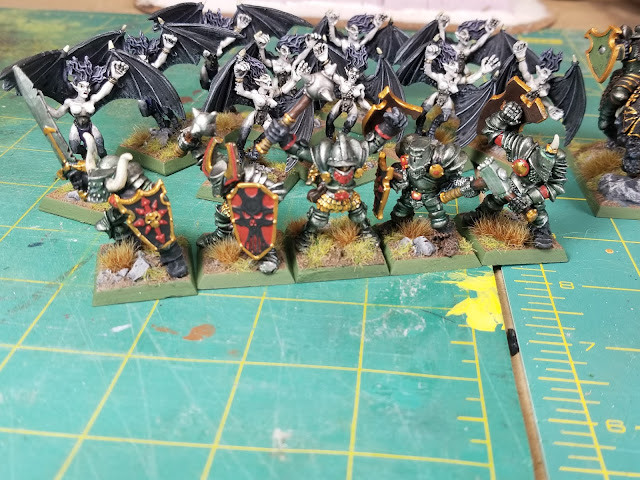 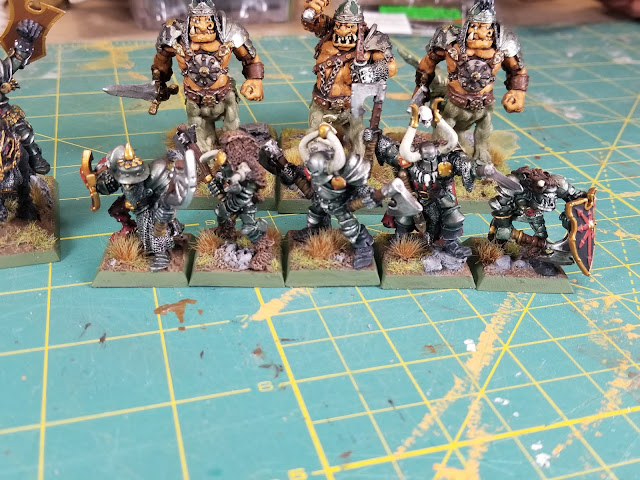 Putting the CW's next to the Dragon Ogres really shows how big the DOs are. 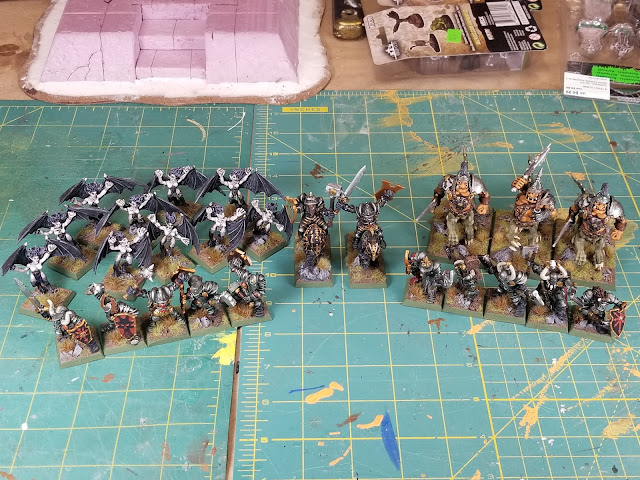 As I'm behind I should have time to get April's figures up soon. A unit of Chaos Knights up soon.

This is the 3rd installment for the OWAC, submitted in February.

The OWAC started on a Facebook group to motivate members to paint old lead lying around for years and years. You have to paint 1000 points, 200 pts a month for 6 months, and a one month miss(mulligan). I took my mulligan in Decemeber.

For this month I went with Harpies. Now Harpies exist in two armies. Chaos and Dark Elves. I had unpainted figures for both. I picked to paint the Dark Elf version as I like that sculpt better. More harpy looking. The Chaos harpies look like Gargoyles to me. Some of these are Resin, but most are metal. 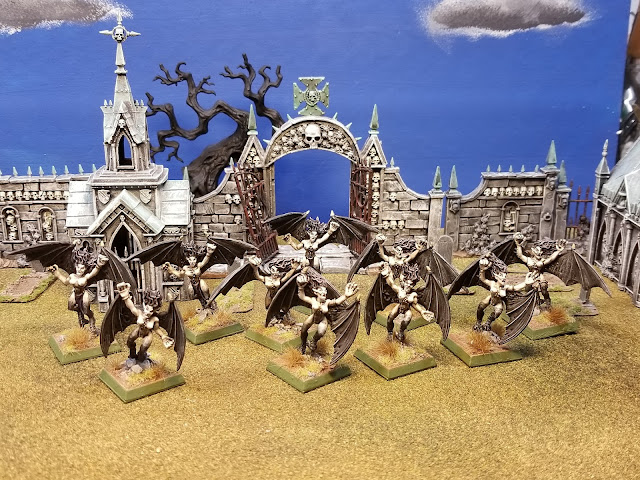 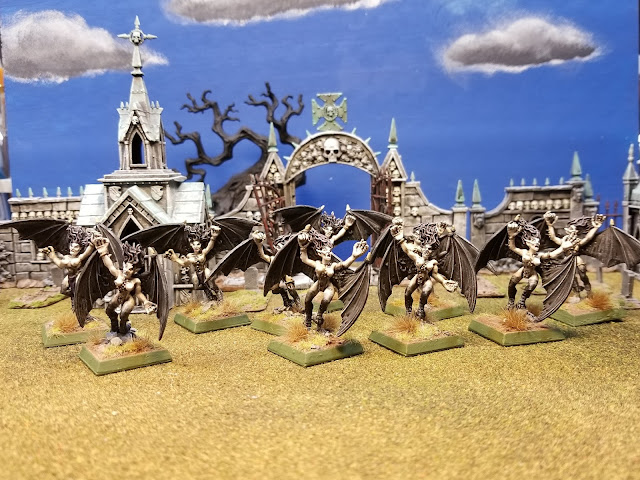 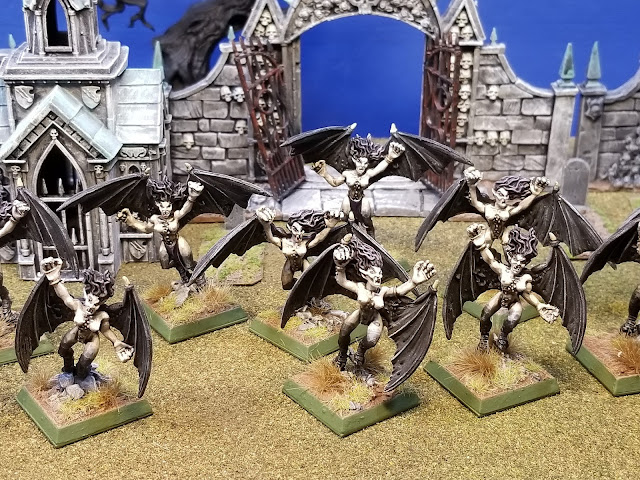 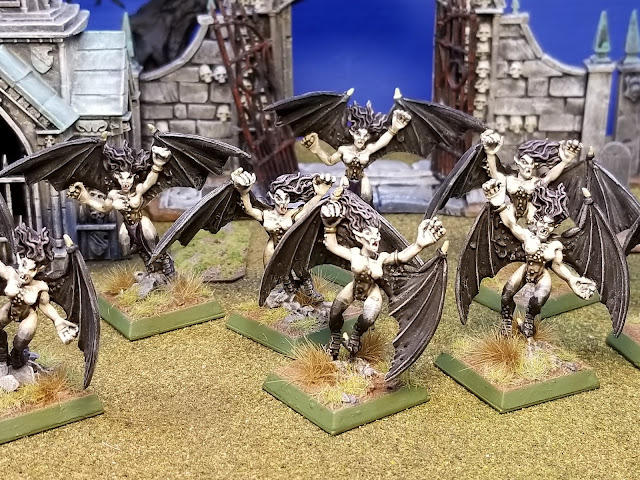 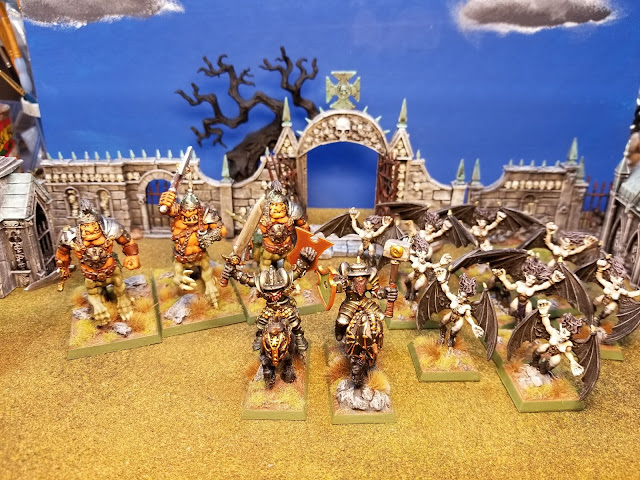 The last shot is all the units together. I still have to add, Chaos Warriors and Chaos Knights.