Here are pics of the game I ran at Fall In. I did 2 sessions. The first game I had 4 players and the 2nd had 8 players. I broke the players into 2 teams for each game. A good side and an evil side. That way the game would move faster if half the players were moving at the same time.

I made some minor rules changes to handle a large convention game. Every building had treasure in it. All treasure on the lowest level was worth one point. The treasure in the castle ruins and the raised area at the other end are worth 3 points. Also each Wizard had an individual mission that was worth 10 points. 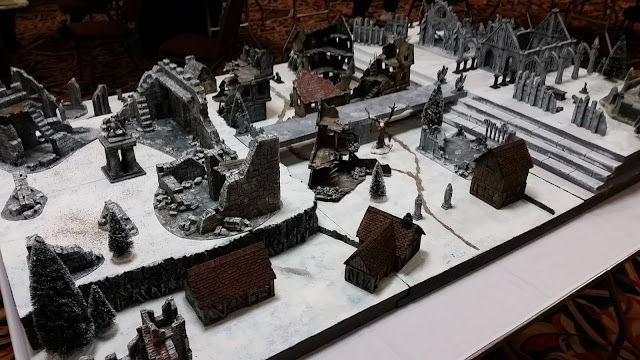 Here is the table set up before the game. 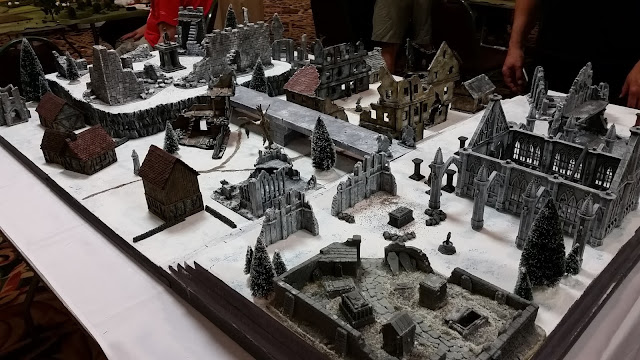 Castle Ruins on the left, then a Cathedral, Graveyard and Dragon Temple on the other. 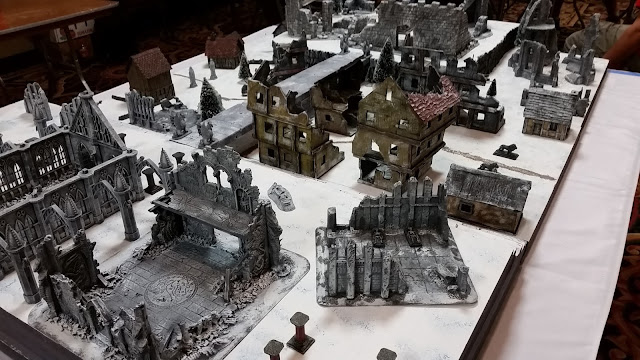 Taking pics from each corner. 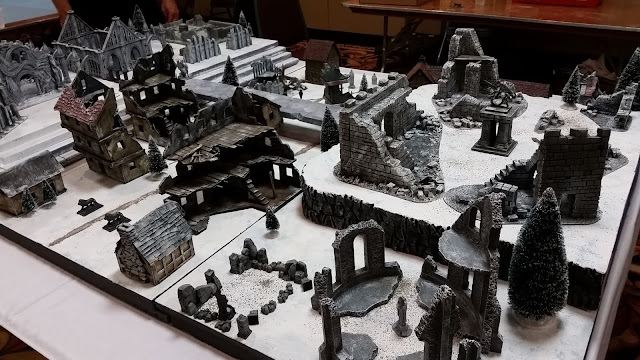 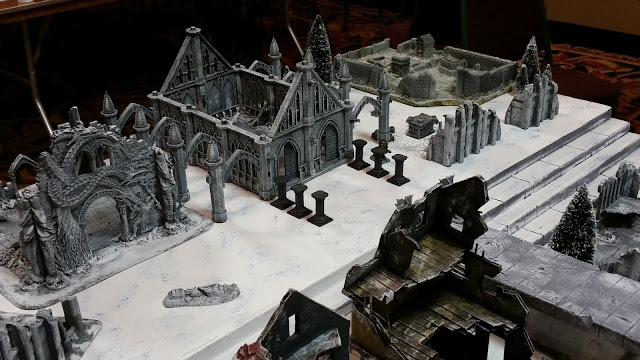 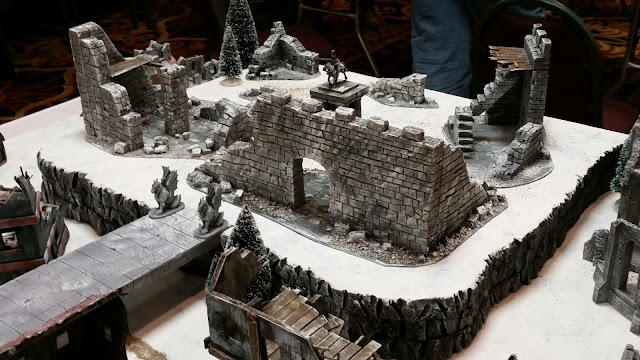 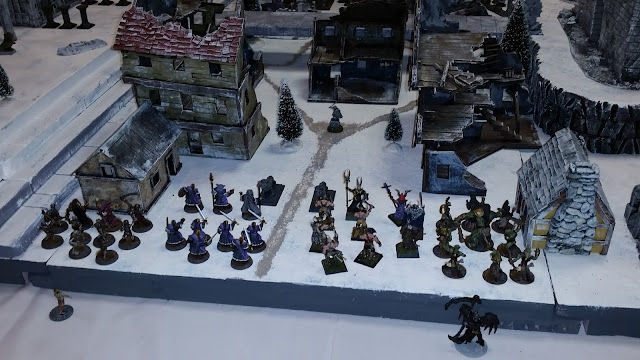 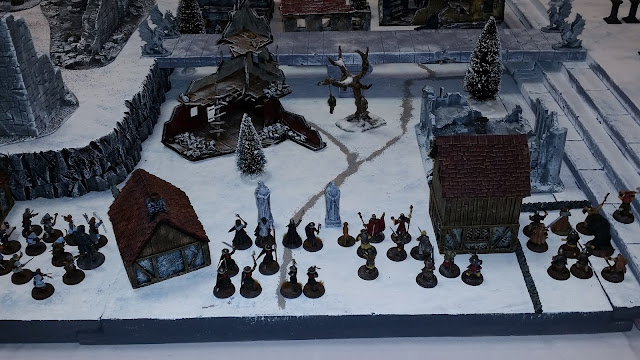 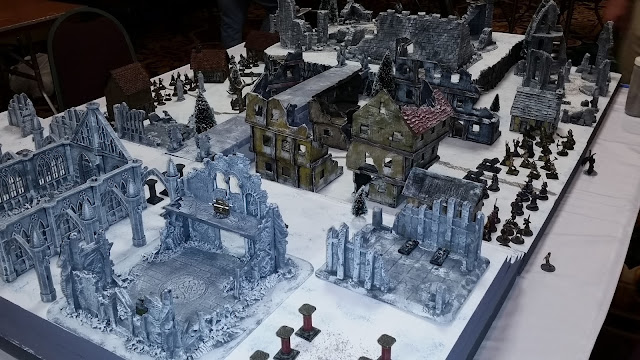 Rear shot of the Temple area 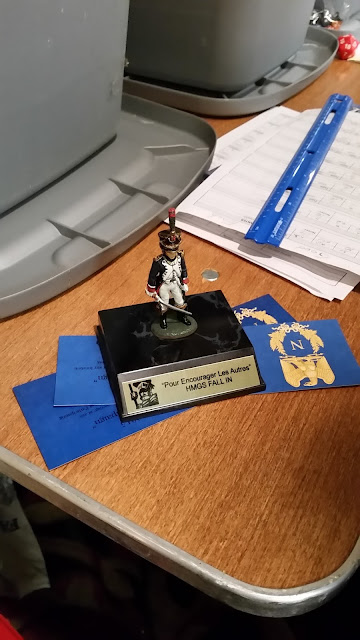 I got this guy for Best Table in my Time Slot. I was shocked. 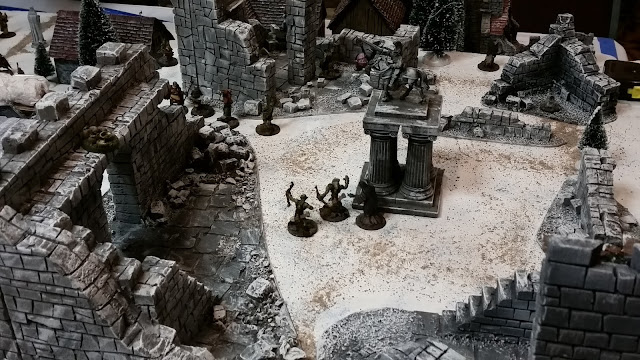 Fighting in the Castle 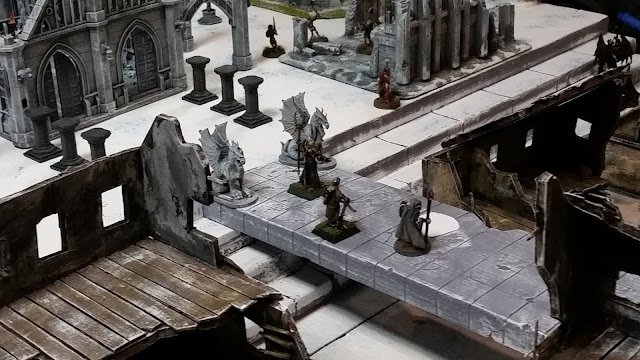 Troops on the Bridge. The White piece of paper is where the Chronomancer cast Crumble and dropped an enemy Apprentice to the lower level. 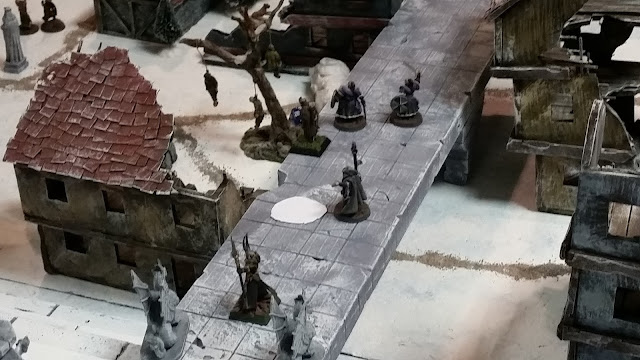 Evil has seized the Bridge. 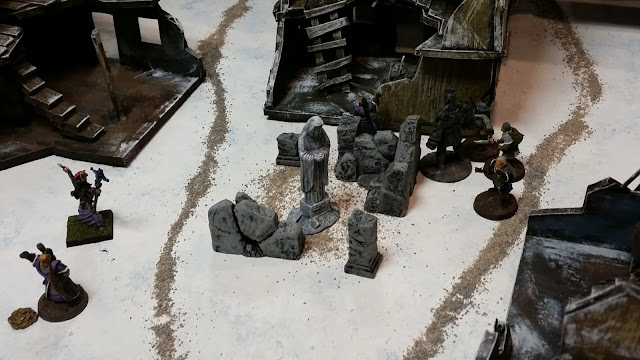 The construct and Enchanters Soldiers beating on The Chronomancers soldiers 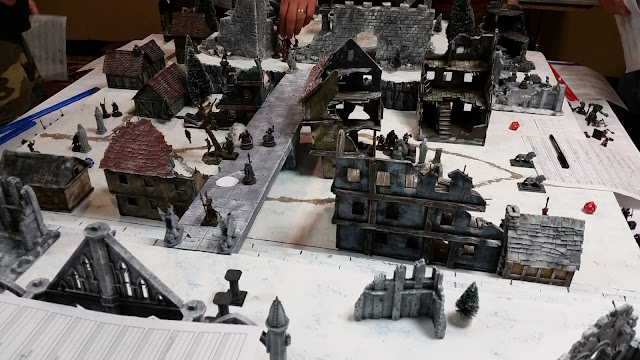 With everyone scattered all over the board it is hard to paint a narrative of the battle. I'll just sum it up. Session 1(4 player) Good won by collecting the most treasures. Session 2(8 player) Good won by getting the most treasures and completing personal missions. The last mission by the Enchanter pushed them over the top. I will point out, Good paid a price for victory. Evil managed to kill 3 Wizards!

I will most likely re-run this game at Cold Wars. That will give me time to build a better table. There were aspects of the table that were rushed or unfinished. I have plans...

Here are the Bad Guys from my 8 player Frostgrave game I ran at Fall In 2015. The Good Guys are here. 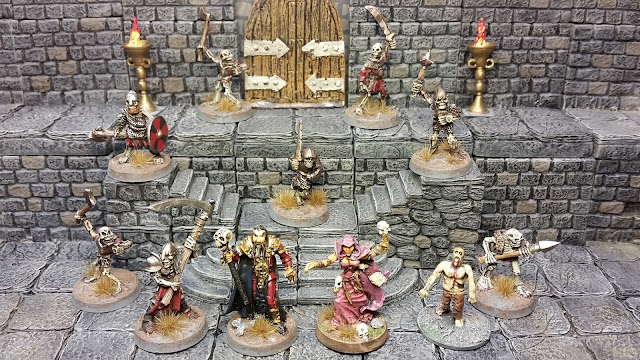 The Necromancer. Wizard and Apprentice is from Reaper. The soldiers are 30 year old Games Workshop Skeletons. The raised Zombie is Wargames Factory. 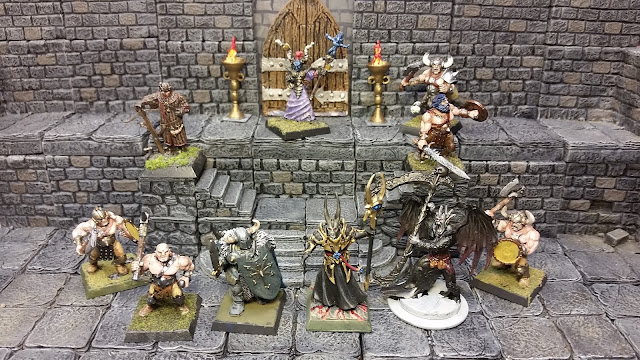 The Summoner. Frankly I ran out of time and had to borrow figures to get 8 teams. The Wizard is one I painted and is a Chaos Sorcerer. The rest my good friend Lou painted. I'm not sure where the Apprentice is from. The soldiers are all Chaos Thugs and the Demon is D&D Plastics. Thanks Lou! 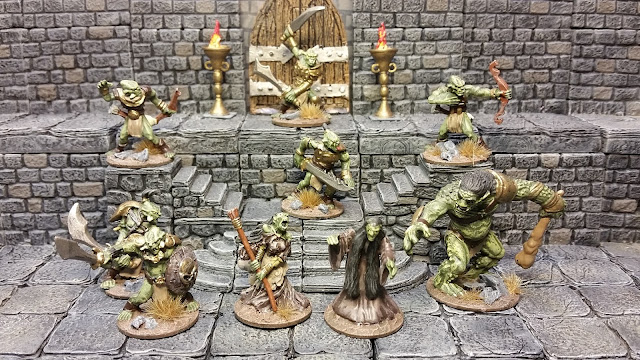 This is my half-troll or Trollkin Warband. The Inspiration for this warband is the Wendol from The 13th Warrior. A tribe of warriors led by a Witch. The Witch(right) and the Apprentice  are both D&D Plastics. The Trollkin Warriors are all Heroscape Gruts, and the Full Troll(Animal Companion: Bear) is a Dreamblade Mini. 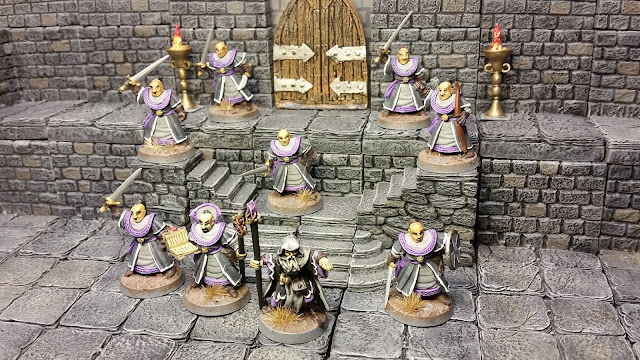 The last Warband on Team Evil is my Chronomancer. The Wizard is a Reaper. The Rest of the warband are converted Games Workshop Acolytes. I've had these figures for 25 years. I always intended to make a Wizards bodyguard for my WHFB Empire army, but never got around to it.

Next up is pics from the game.

Last Weekend was the wargame convention Fall In, in Lancaster PA. I ran an 8 player Frostgrave game. It was chaotic but fun. I was previously blogging about putting the table together and building the terrain, but I fell way behind in my schedule so blogging was set aside. I was so far behind that I was painting sections of the table, the morning we were leaving.

With the chaos of the convention behind me, I can post some pics of the build up and the game.

My game consisted of 8 Warbands broken up into 2 sides. The Good Guys and The Bad Guys. Then each Team had individual goals for the game as well as Treasure collecting.

Here are the Good guys: 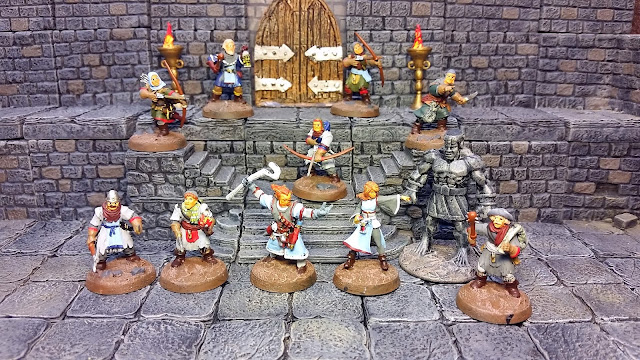 My Enchanter Warband. The main color is a light blue, but the photo washes it out. Soldiers are official Frostgrave figs. Wizard and Apprentice are Reaper as is the Construct. 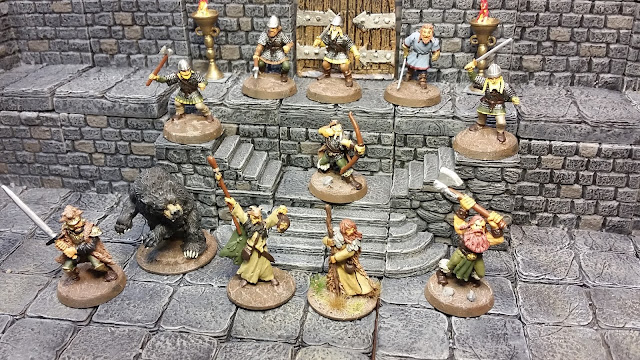 This is my Druidic/Norse Warband. Wizard(left) and Apprentice are Footsore Miniatures. Bear companion is a D&D Plastic fig. Infantry, Barbarian and Archer are all old old GW figs. Thugs are Gripping Beast Plastic Vikings 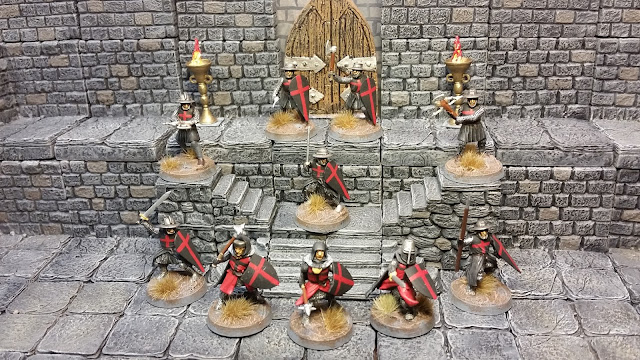 I used Fireforge Teutonic Foot for my Cleric Warband. This warband is themed as a D&D Cleric. I did custom spells to mimic AD&D 1st ed Cleric spells. 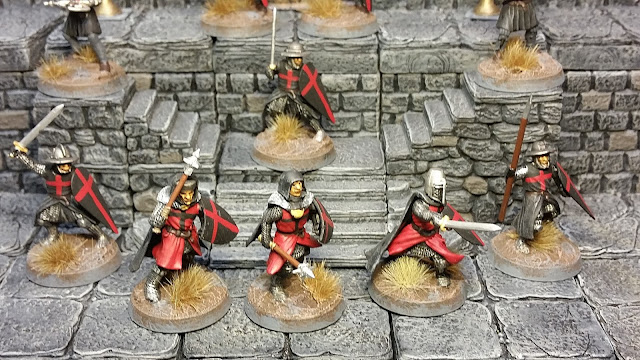 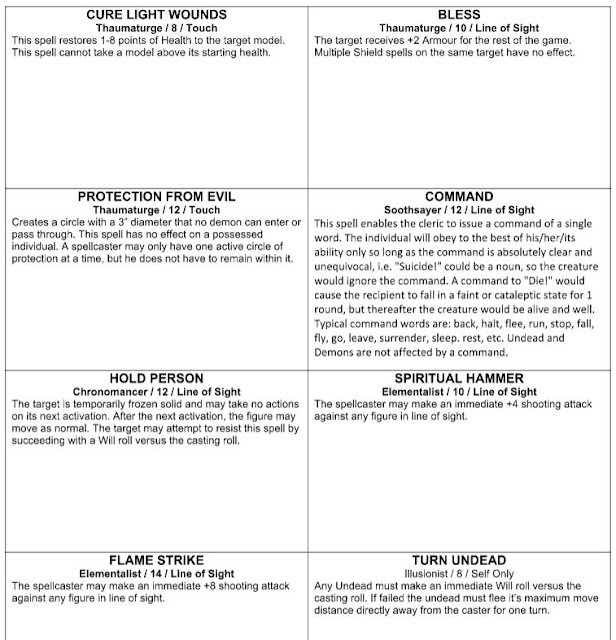 These are the spells I used for the custom class Cleric. I might tweak them a little for future games, but I think the base spells work. Some of them are renamed Frostgrave spells, some are new. 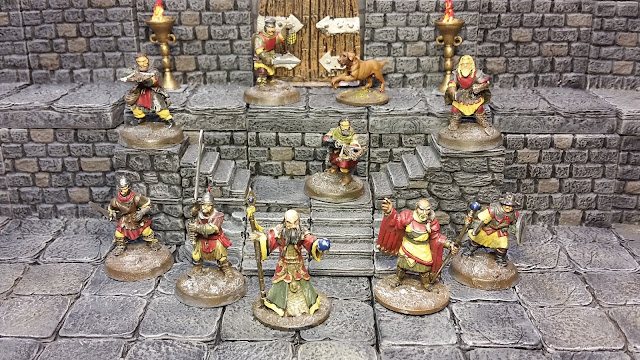 Last up for  the good guys is the blaster or Elementalist. The Wizard(left) and the Apprentice are Reaper, all the soldiers are Frostgrave and the dog is Warlord Games. 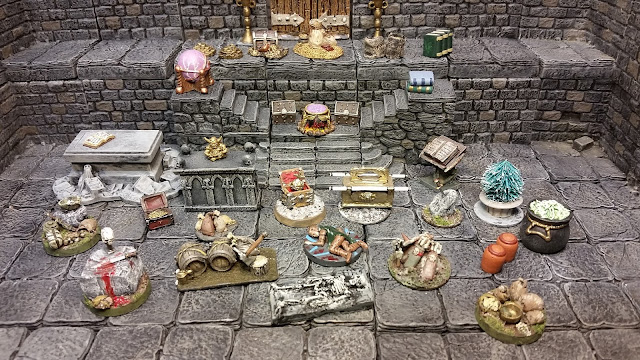 Here are most of the treasures I put on the table. The custom ones were all made by my good friend Lou. He is an amazing scratch builder. Others are Ral Partha Wizard Lab pieces, Hirst Arts Accessory molds, Reaper Bones pieces, GW bits from my Empire army, GW LOTR Balin's Tomb and one Otherworld Mini's piece. 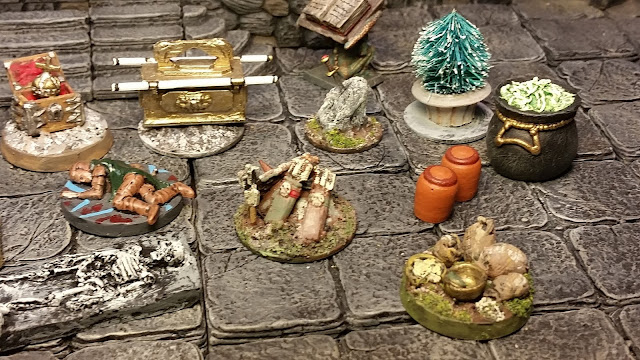 The wounded figure is a D&D Plastics piece, That was a special mission piece to Rescue a Friend. Some of the custome pieces are The Holy Hand Grenade, The Ark of the Covenant, Excalibur, and a Shrubbery. 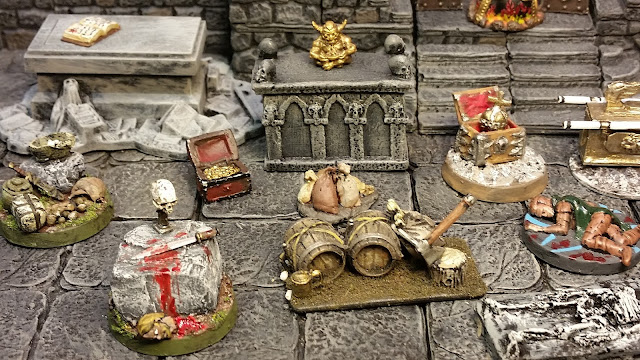 Other custom pieces are supply caches and a sacrificial Alter with recent victim. 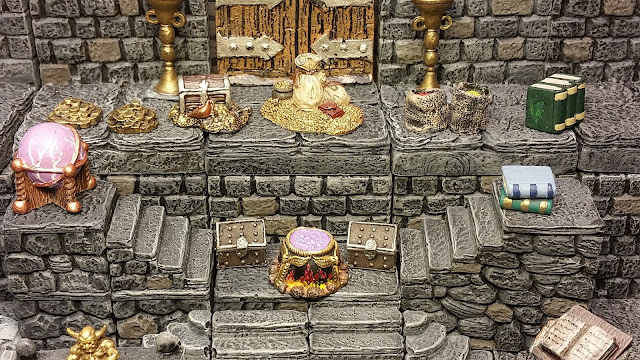 3 more special mission pieces can be seen here. The Time Orb for the Chronomancer mission. The magical Cauldron for the Troll Witch mission and the Golden Demon Idol that was for the Summoner Mission.

Next up will be the Evil Warbands then I'll have pics of the game.