My first game of Oathmark

I've had these rules for a few weeks now, but didn't get around to getting in a game till last night. My friend Lou came over and we took the rules out for a test drive.

I just painted up some fences, walls and a bridge so I wanted to get them on the table. Here we have a sleepy little river valley between two villages. Soon to be shattered by War.

I put together, 2 army lists, Orcs and Humans. About 1300 points. Using my Orc and Gondorian figures from GW. 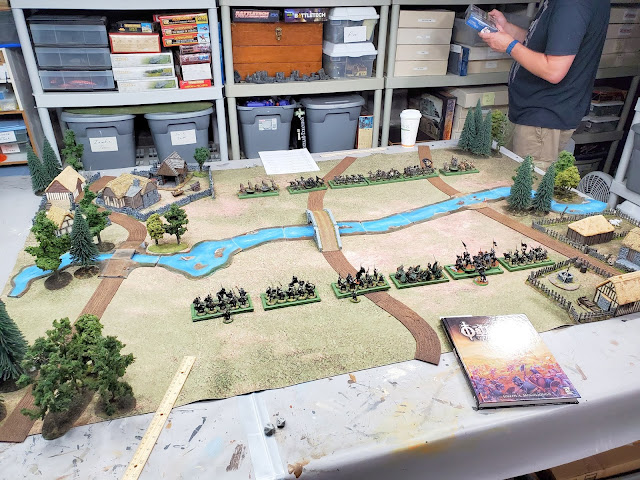 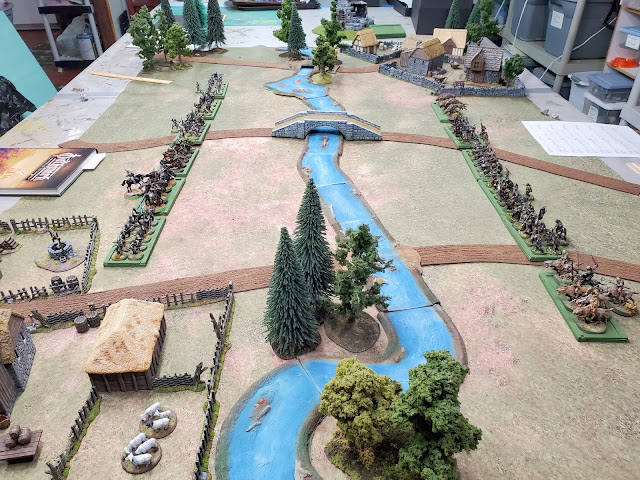 Human's on the left, Orcs on the right. 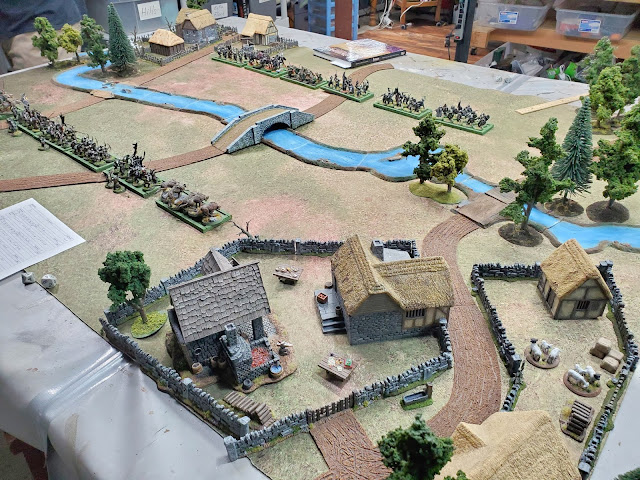 Most of the pics are from the Human side(I controlled the Humans), but this pic is from the Orc side 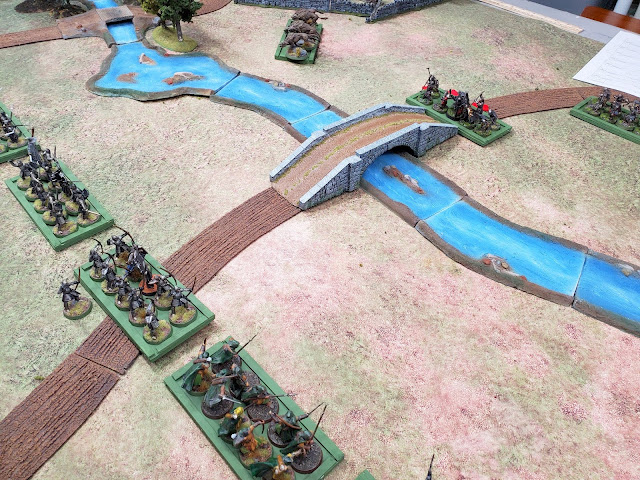 I took the Humans, Lou had the Orcs. Lou won initiative so Orcs confidently moved to seize the  crossings. I moved closer and showered them with arrows. I killed about 3. His return fire killed 2 of my Rangers. 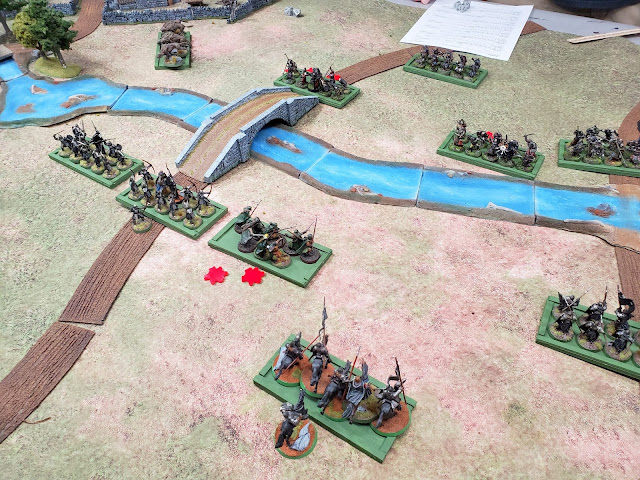 I countered with Arrows and slow advance to the river. I took some hits in return. 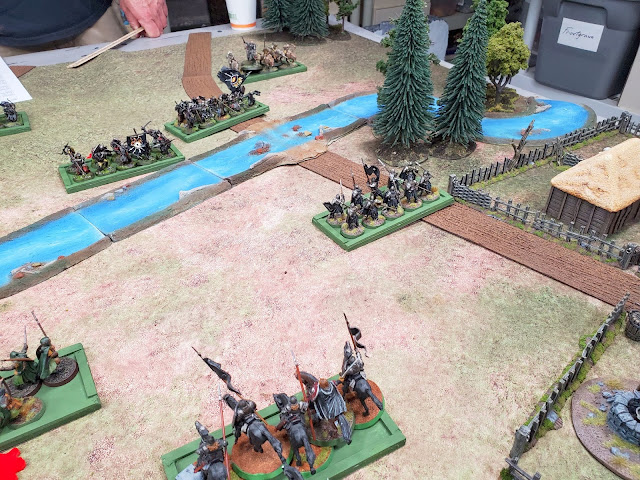 Someone missed their activation. I'm looking at you KING!!! 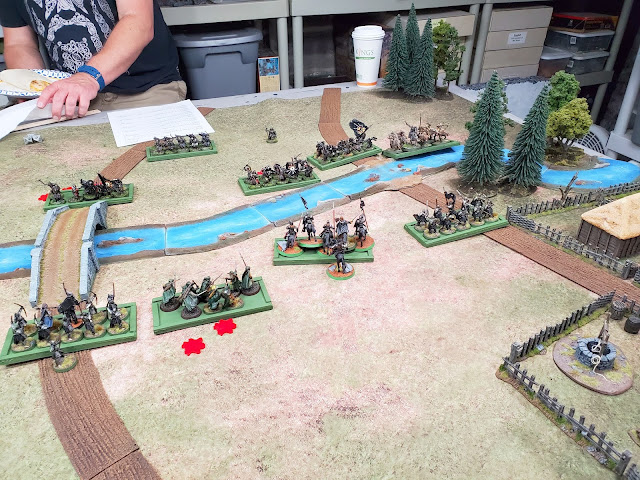 The King and his bodyguard finally get it in gear and move up to support the lone spearmen unit. 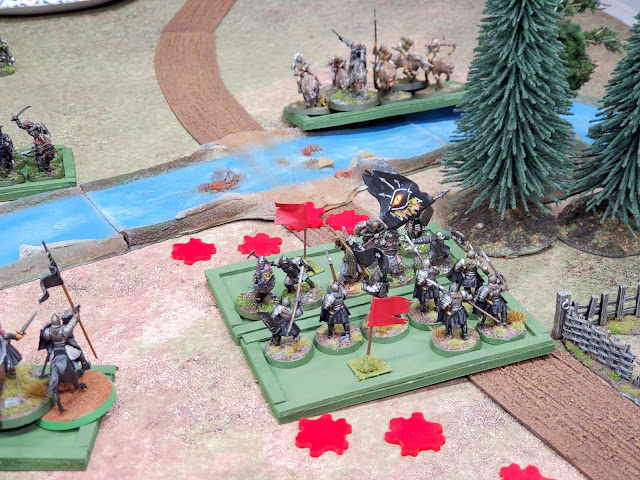 Orc Warriors storm across the ford and slam into the spearmen. It was a bloody affair. The spearmen won, but both units failed morale and went disordered. 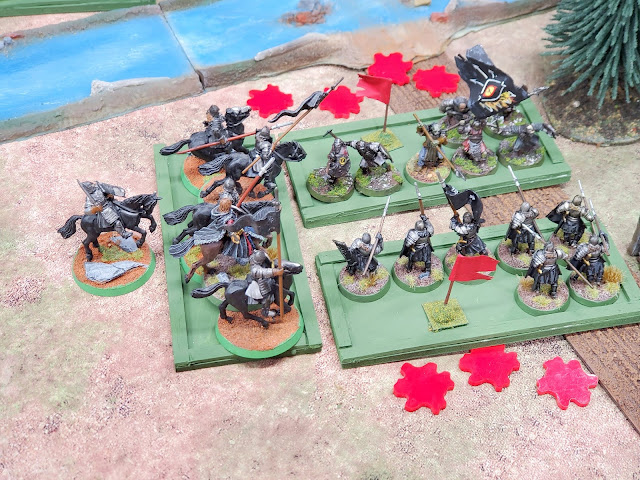 The king couldn't help himself and charged into the flank of the Orc Warriors, wiping them out. 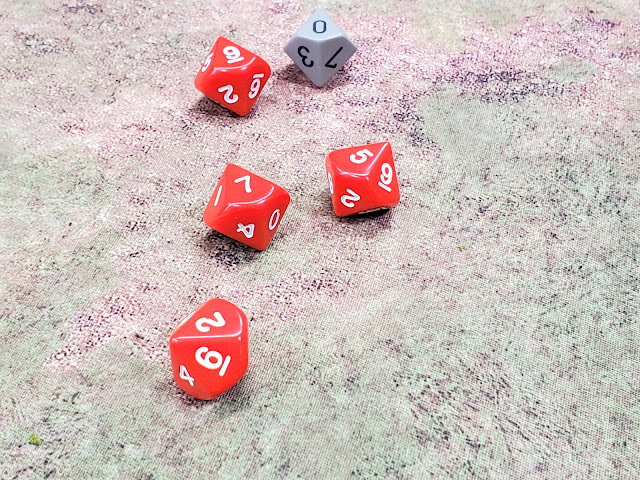 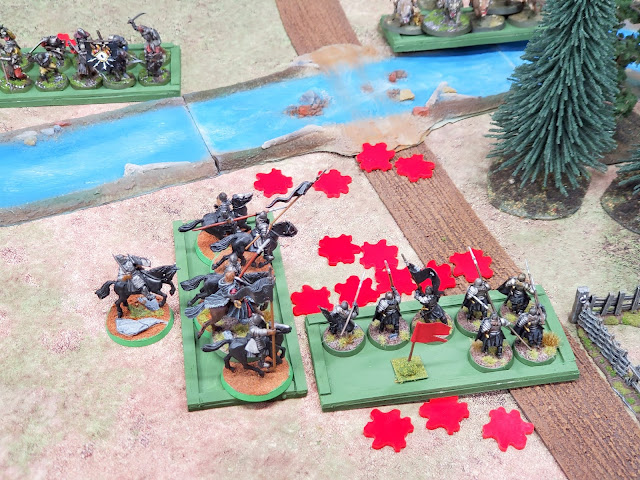 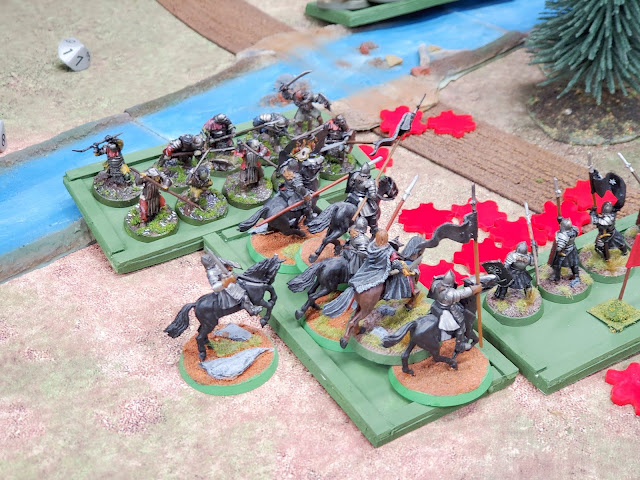 The King now pays for his rash charge and is hit in the flank. The Orcs rolled very poorly and only Killed one knight. 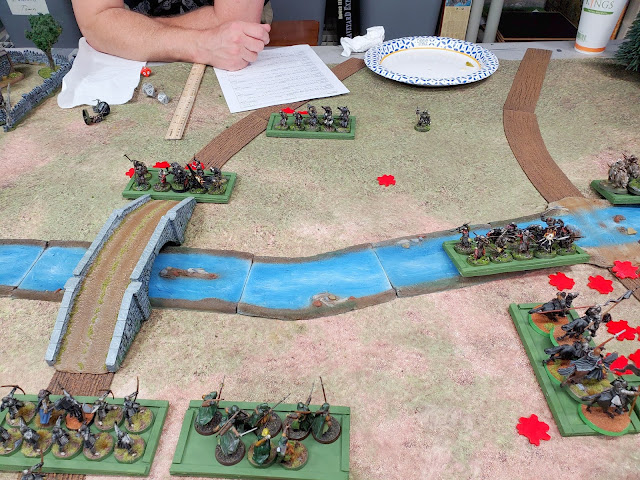 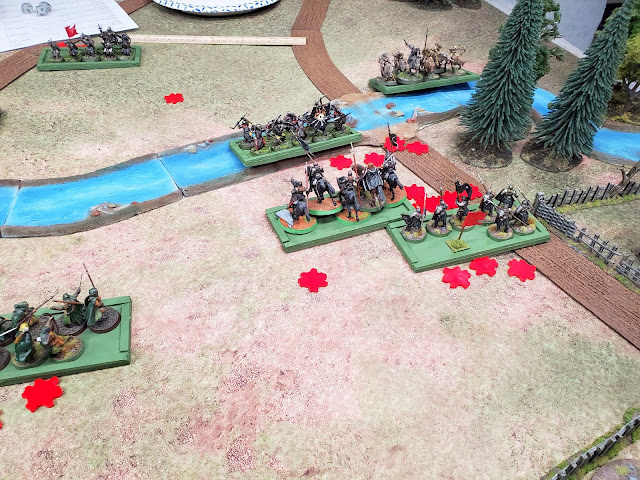 The Wizard used his one spell to Shift the Knights around so they are not vulnerable to another flank charge. 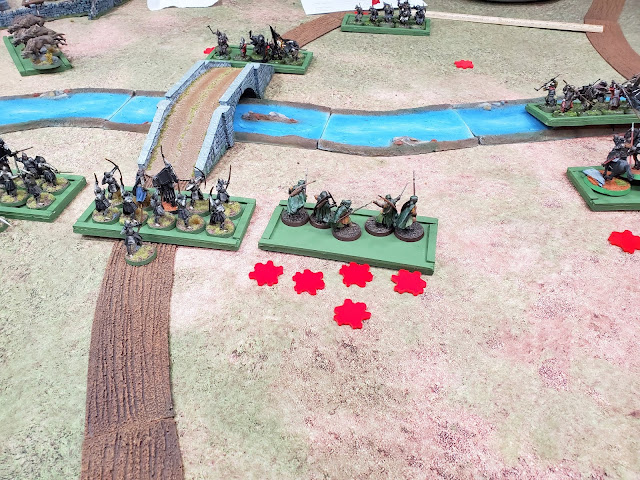 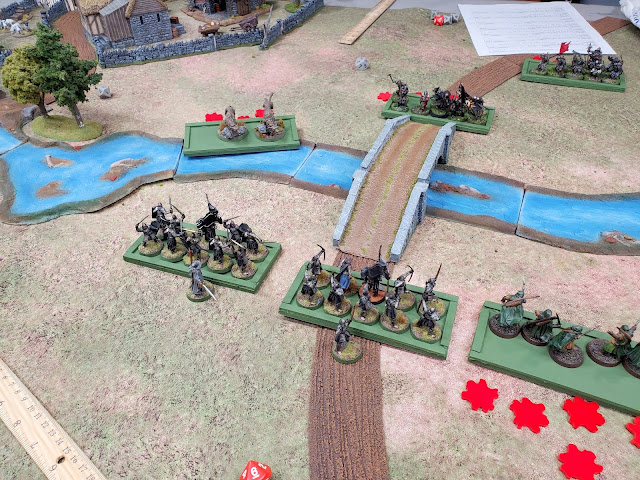 On my left, the Wargs were making a run at the left most crossing, I sent a spear unit over to guard it, and the Wargs dodged back leaving me out by myself. Well played Orcs. I replied by shooting at the Wargs, killing 3. 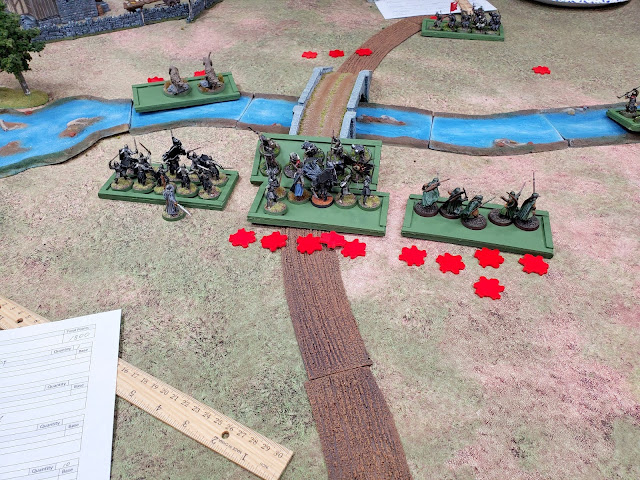 The Orc Warriors charge over the bridge cutting down half the spearmen. 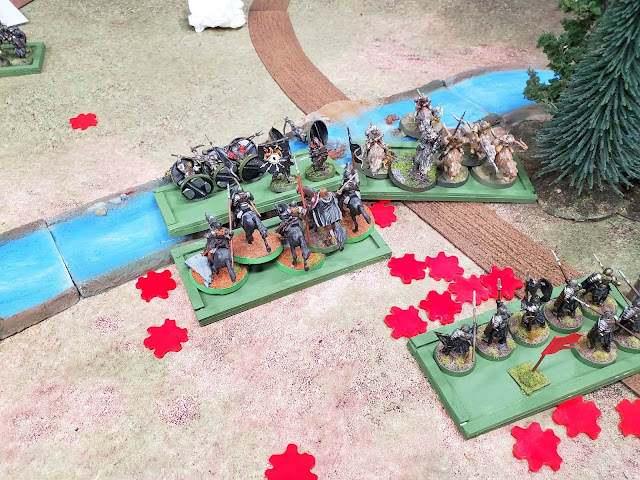 At the start of the 3rd turn The King charges the Warriors in front of him. Cutting down most of the unit, but 2 got away. 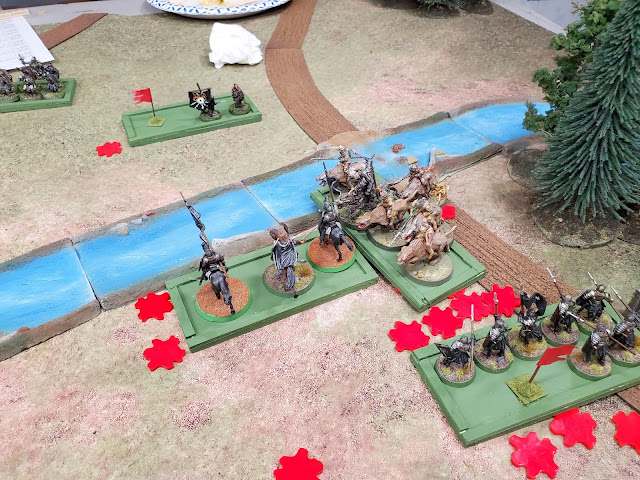 Here is where I lost the game. I didn't think the charge through. The Orc King on his Warg flanked me, and wiped me out. We called the game right there. Just a final low angle shot from one village to the other.

We both enjoyed the game. It wasn't ridiculously complicated and flowed along. We fought to a decisive ending but it was a close match all along. We can't wait to give the campaign system a go.

Frostgrave Rules Free Give Away 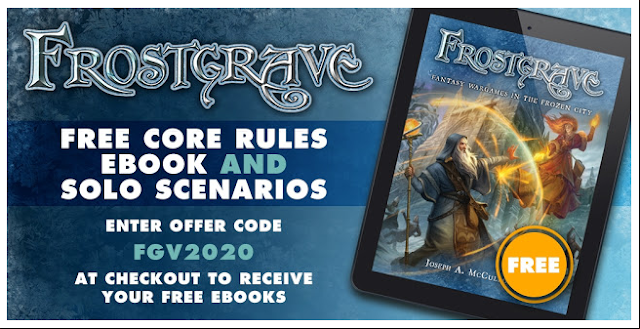 The rules author Joseph A. McCullough and Osprey are giving the Frostgrave Rules away for free with solo scenarios for this time in quarantine.

It's a good time to explore Frostgrave! 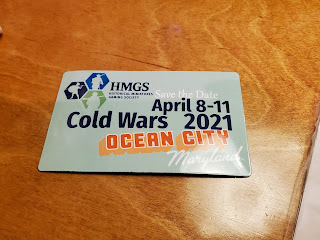