Over the summer I bought a new workbench from Amazon(Link here), and have been slowly getting it together. I'm almost all done, but there are a few more odds and ends that I need to finish. 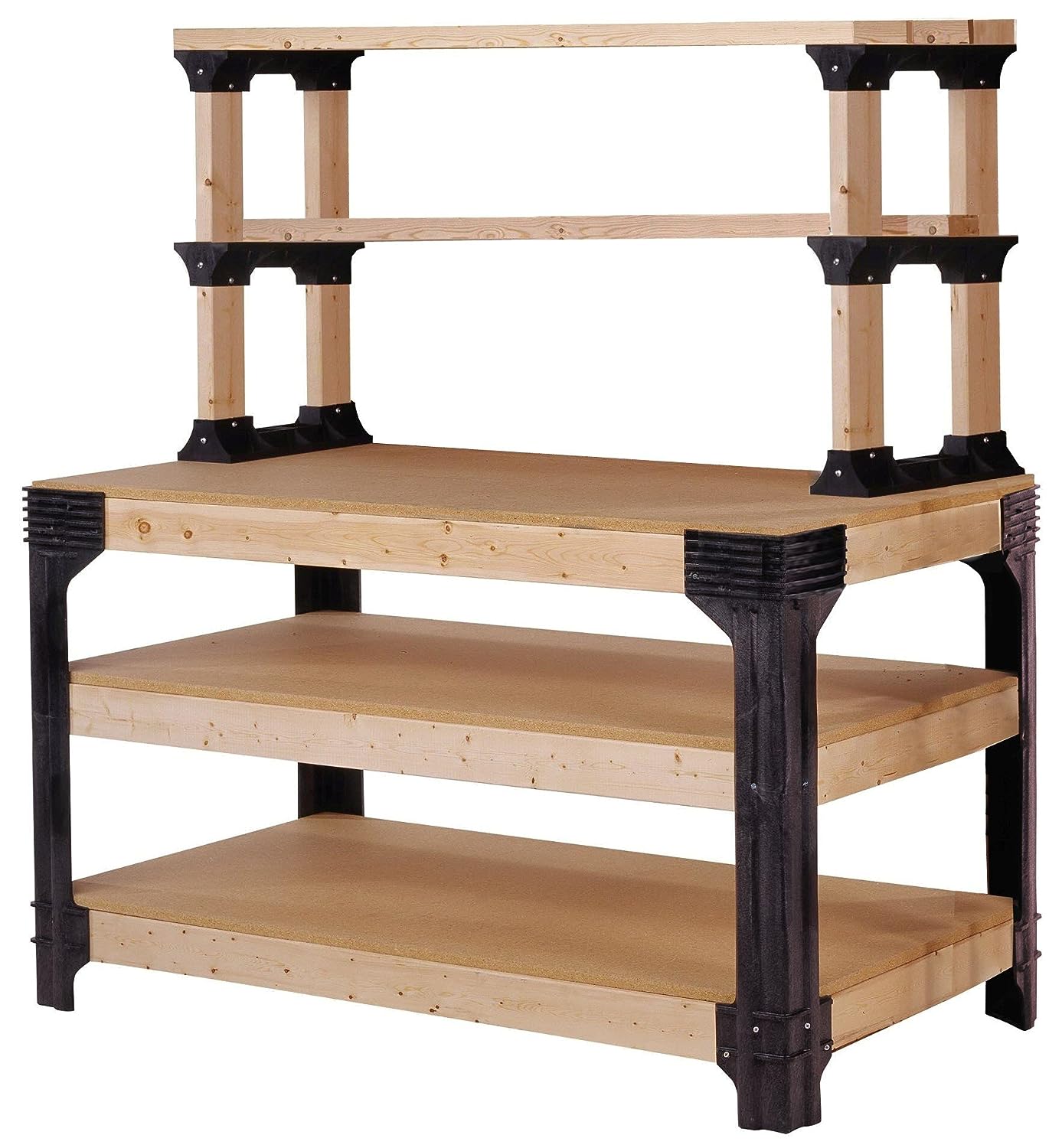 The cool thing about this bench is you buy the lumber separately so you can customize the size you need. It can handle plywood sheets as large as 4x8. I went with 3x6 as this fit the space I had. 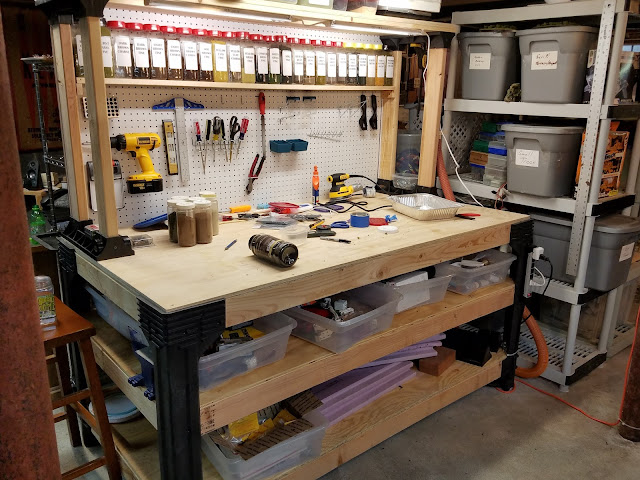 I added a pegboard back to the workbench. And added under shelf lighting. 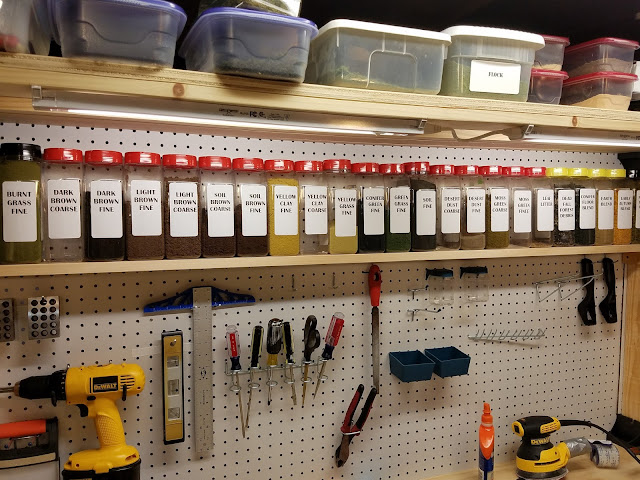 I might be obsessive compulsive about organization and my flock.

I need more red lids. I can't have them different colors. I need help.

Another game of Dragon Rampant with some add on rules.

I really like the base mechanism of DR but I think it's a little too generic. Just a little bit. Also I was looking for a more "warhammer like" game. So I asked on The DR facebook group if anyone is playing with House Rules to add to the game.

Apparently one of the playtest versions before going to print had rules for flanks and rear attacks. I thought these were a good start. Copied from the Dux Rampant Forums:
• Models may move in any direction without penalty, but at the end of the unit’s movement, ensure that all models are facing in one direction.
• To change the direction a unit is facing requires a Move activation, even if the models just turn on the spot.
• Units may only Shoot at targets across the 180° arc to their front, measured from the unit’s forward-most model. At least one model from the target unit must be fully within this arc.
• Units may only Attack units within that same arc; the same applies for Wild Charges (they may not be made against units outside of the arc).
• Units shot at or Attacked by a unit beginning its move or shooting from behind its front arc count their Armour as 1 lower than normal (so Armour 2 becomes Armour 1). This is pretty deadly so don’t get flanked!
• Schiltrons cannot be flanked.

With those rules above we added the following:


With these rules in place we sat down for a 48 point game... 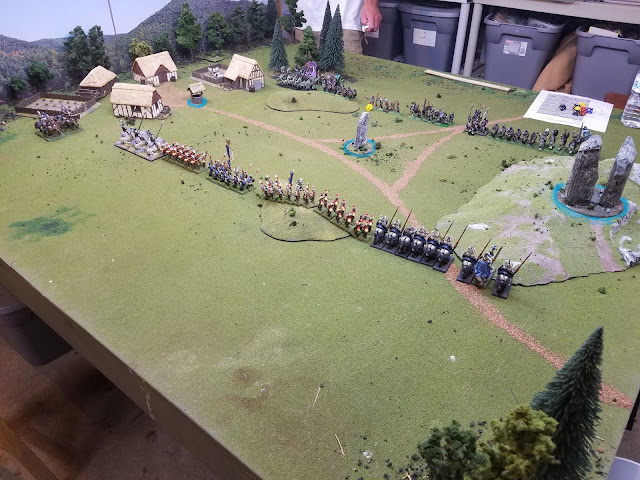 Scenario, grab and hold 3 objectives in the center of the board. Highlight in blue. 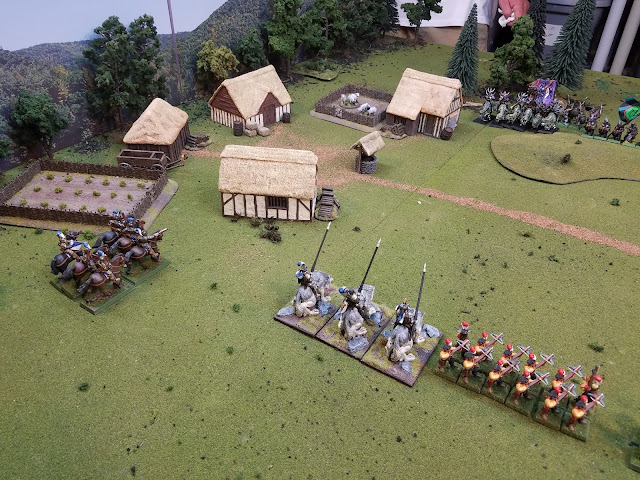 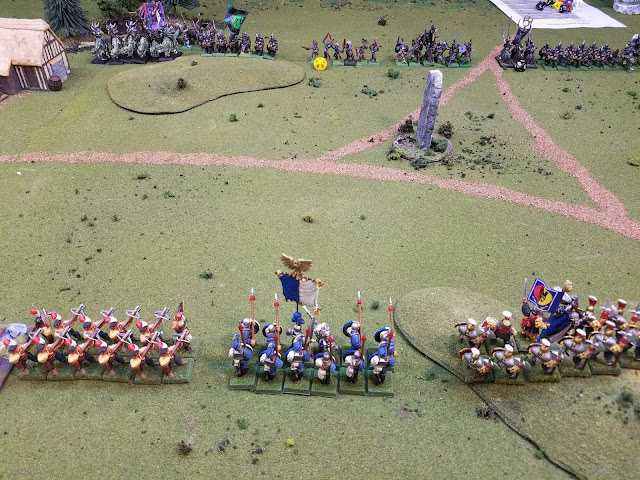 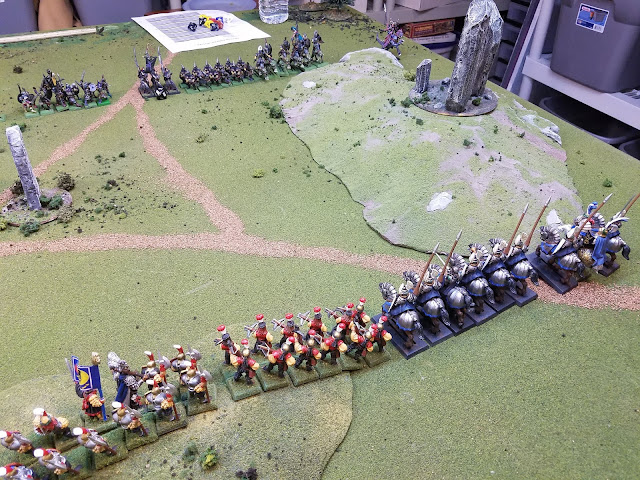 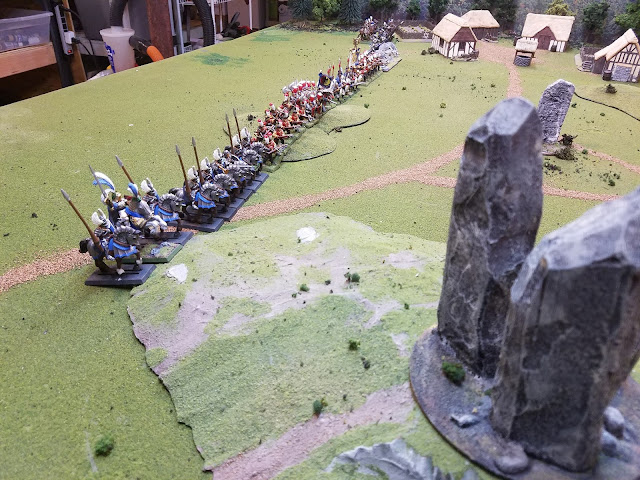 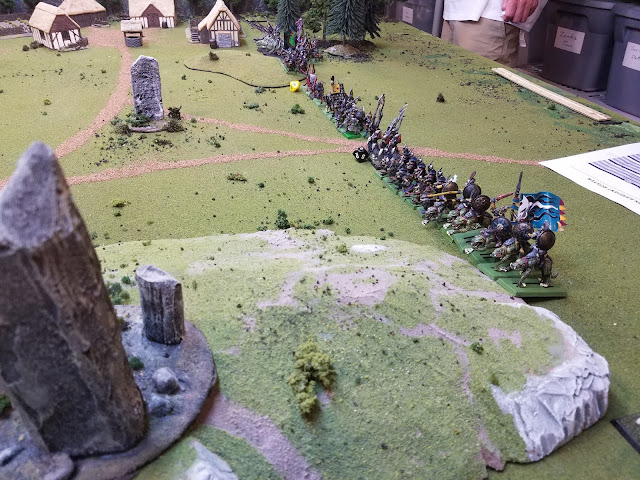 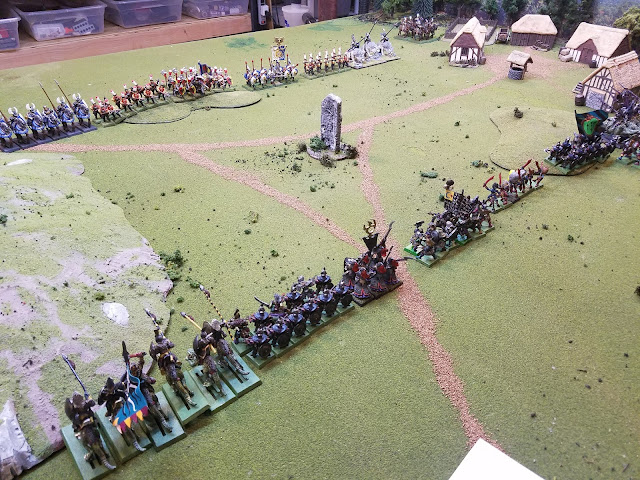 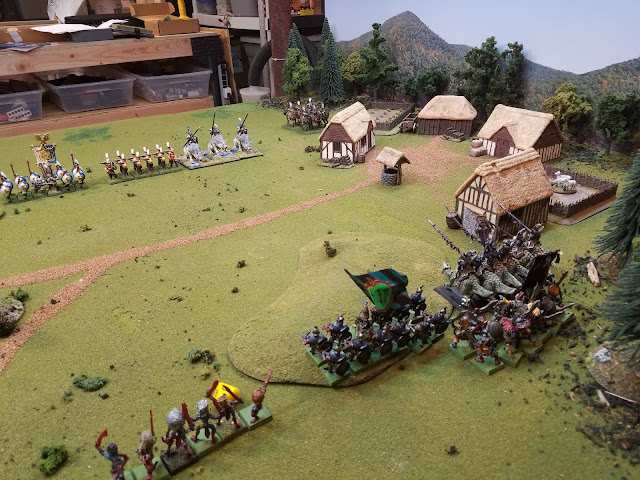 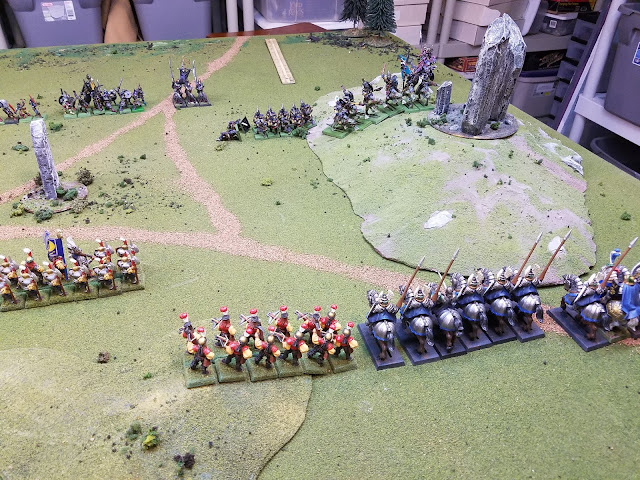 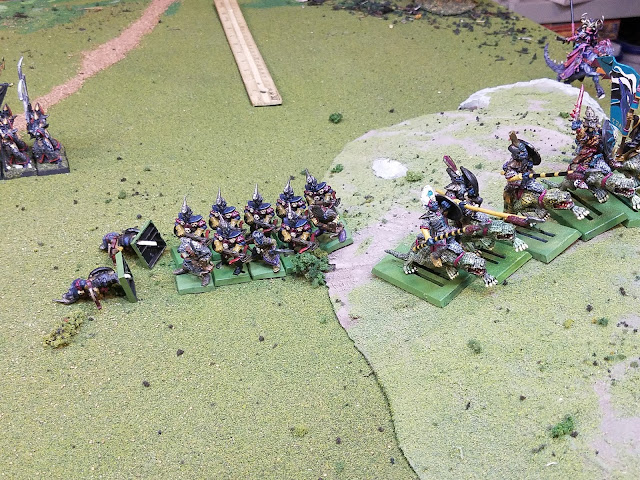 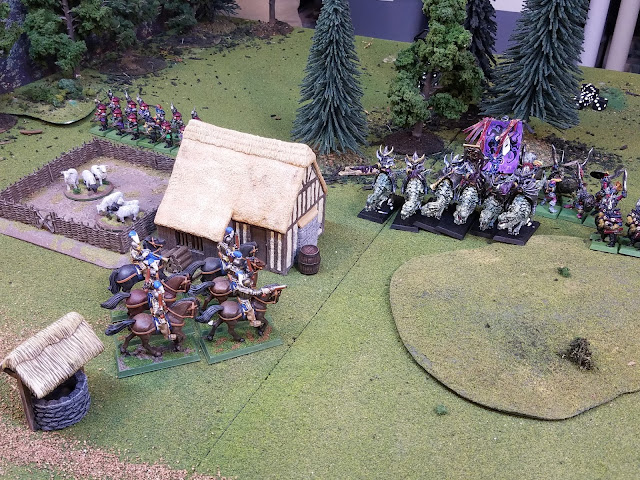 On the left my Pistoleers move thru the village to shoot at the Cold One Riders, no effect. 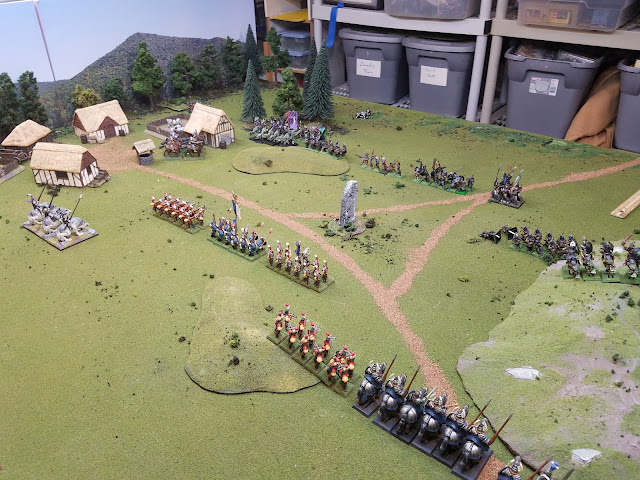 This is after turn one, things get fuzzy here because we blow alot of activations and not much gets done on either side. 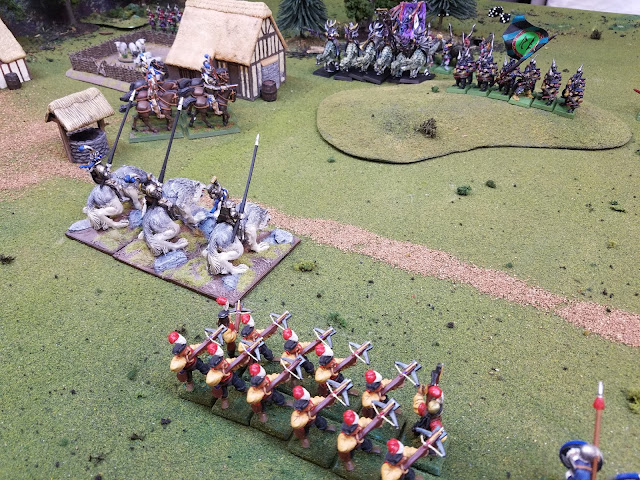 I finally get my Wolf Knights going and Xbow advance. 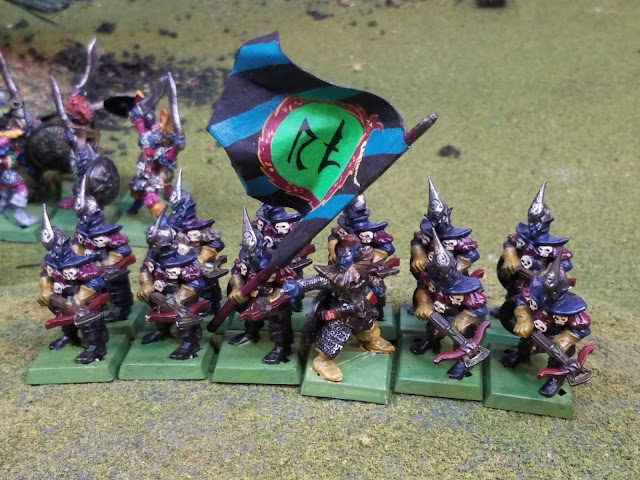 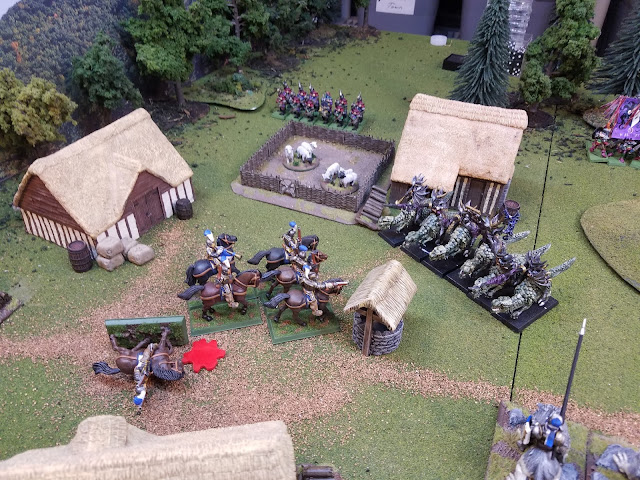 I lose a Pistoleer to Xbow fire. My opponent is very happy. He hates my Pistoleers. 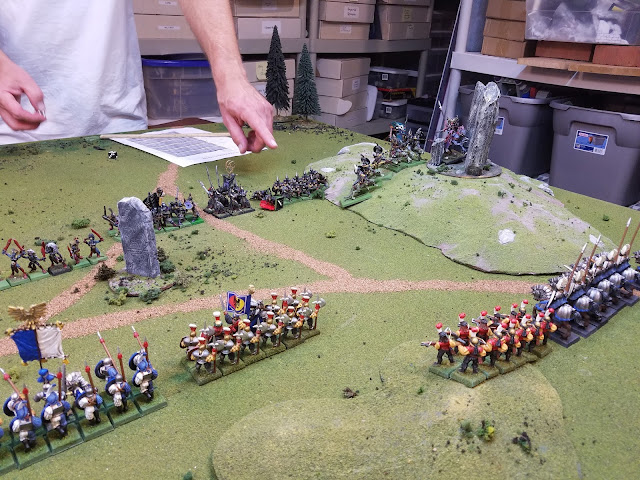 I continue to fail rolls while the Dark Elf player gets most of his line advancing. 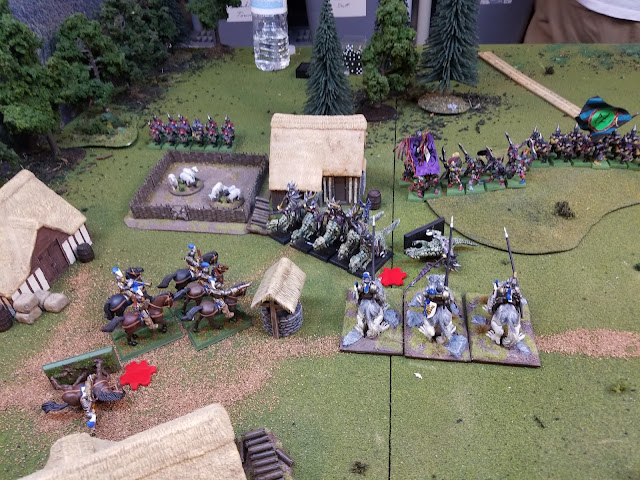 My Wolf Knights make a Wild Charge and kill a Cold One. They flee. 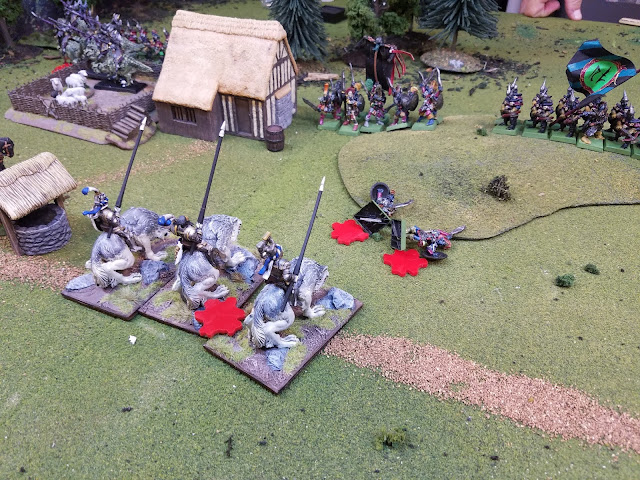 The Dark Elf Heavy foot charge my Wolf Knights and I beat them off, they flee. But I take a hit. 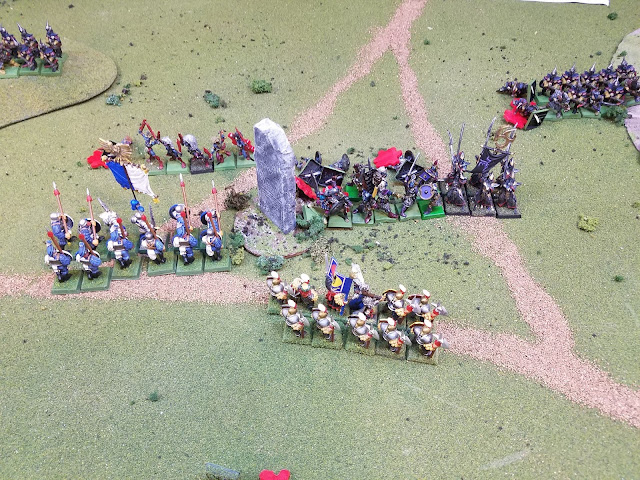 Still not getting my troops moving but I am shooting the crap out of his advancing troops. 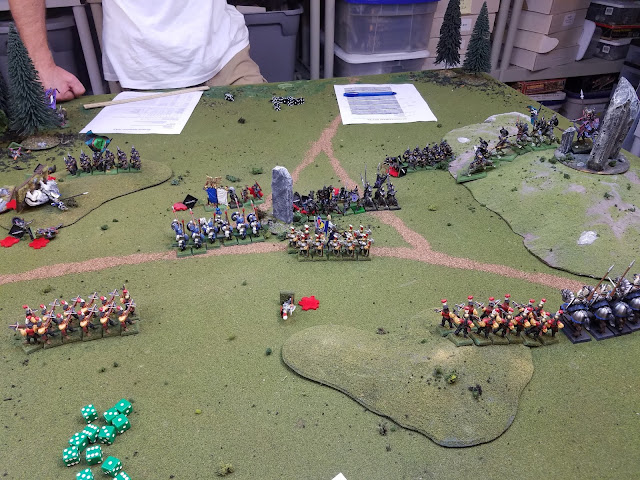 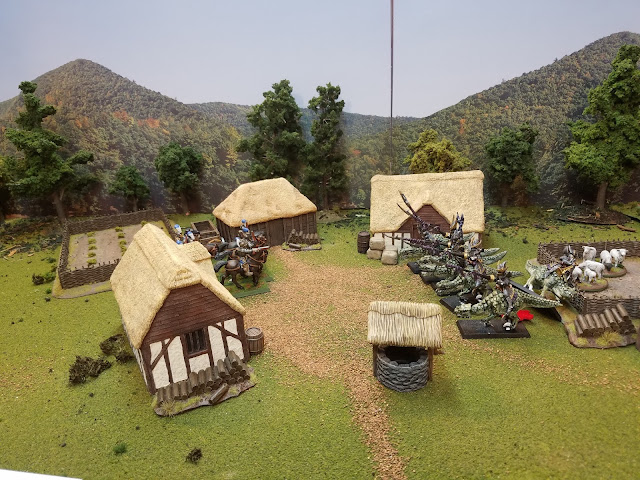 Pistoleers evade a charge and kill another Cold One. They Flee again. 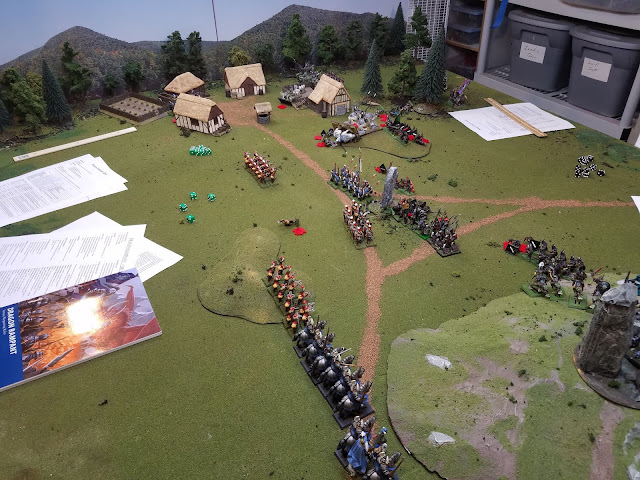 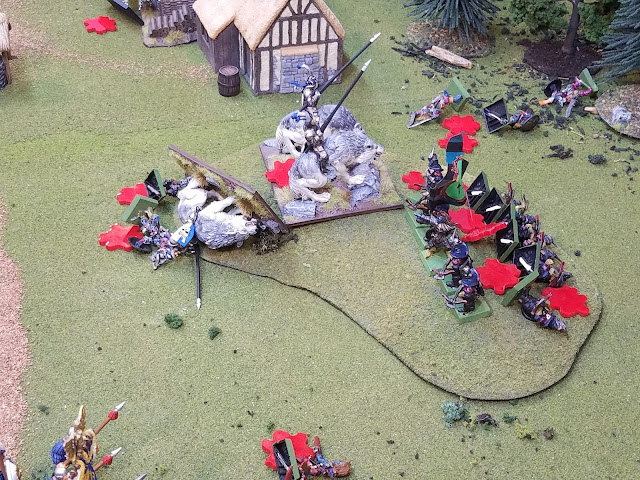 On the far side I lose a Wolf Knight to xbow, but I massacre them in return. 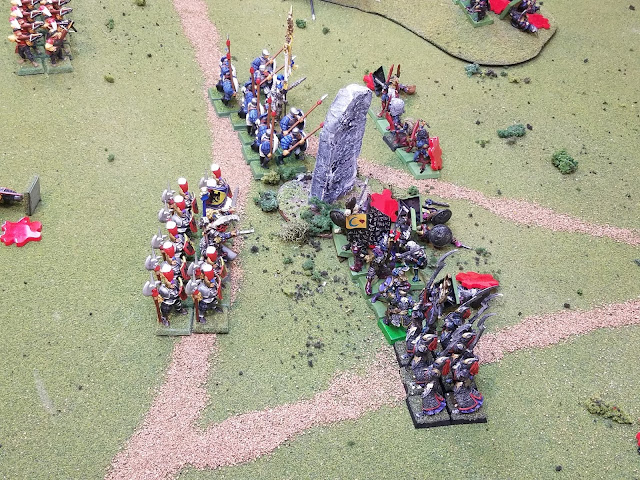 Back in the center, my foot inches forward. 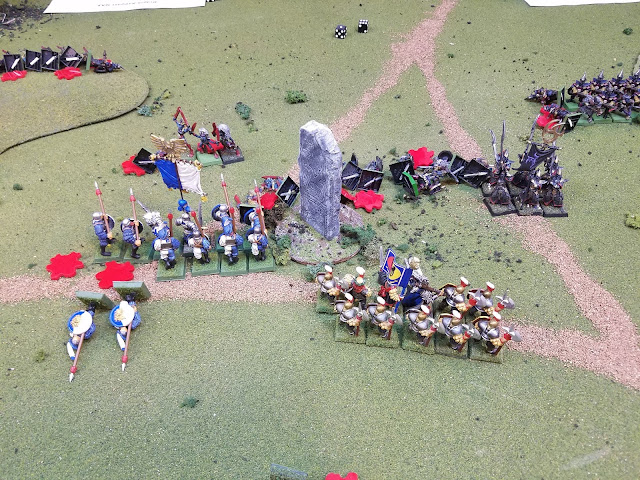 Witch Elves charge and are beaten back. The other Dark Elf foot unit also charges and is beaten back.

At this point we call a minor Victory for the Empire. I have 2 of the 3 objectives and it's getting late.

I enjoy DR, and with the additional rules I really like it. More games and a few more rules tweaks and we are in business.