I registered to run a LOTR game at NJCon5( LINK). Boy did my ego write a check that my painting hand could not cash. I figured I had 6 weeks and it would be a motivation to paint troops. So the scenario I submitted for the game was a Uruk-Hai raid on a Rohan Village. I had no village, no Rohan painted and only about half the Uruk-Hai painted. How's that for motivation? I had a few Aces up my sleeve, but more on that later. This is about Rohan buildings. Well one building, ran out of time for the others.

Games Workshop had some building guides/ templates of Rohan buildings, once upon a time. These were purged from their website during a redesign. I swear to God GW goes out of it's way to shoot itself in the foot over and over again. Why have a website that is useful for gamers? Why have a website that is THE go to site for help modeling and gaming and painting for YOUR models? Really they make money inspite of their best efforts. Once again I digress.

I spent some time hunting around the net, asking on message boards, digging thru my 6 year collection of White Dwarfs. I finally got a hit. A very nice person that goes by the name of Haywire on TMP emailed me scans of the articles I was looking for. Excelsior!!! Now I just needed a time machine to be able to make what I needed. I did manage to squeeze in a enough time for the Rohan Watch Tower. Click on the pictures for bigger versions.

The instructions have a template. You print them out and trace them on to Balsa Wood. So I did just that. Then you are supposed to use an x-acto knife to cut out the pattern. 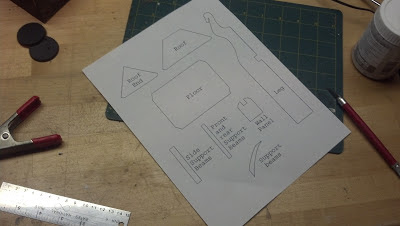 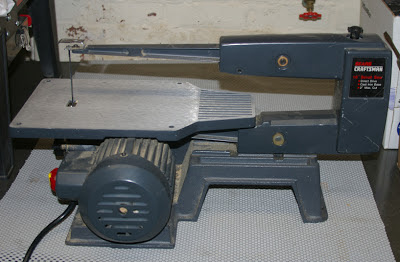 I printed out the pattern on to cardstock paper, and cut out each piece. Then it was simple just to trace this out on to the balsa wood 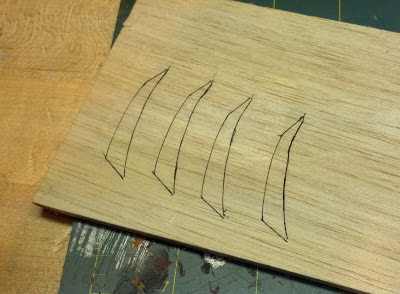 After carefully using the scroll saw I get this 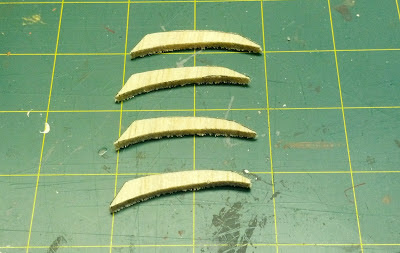 I used some Fine grain sandpaper to smooth the edges down. With all the pieces cut out I'm ready to begin construction. My base is. a piece of MDF board I had. Cut big enough for the tower and a little extra all around. I also beveled the edges with a grinder. I applied a generous amount of Liquid Nail glue to the base of each support and put in the floor of the raised platform. Sometimes as things dry they shift some I placed some heavy objects around the tower to prevent that. Just touching each corner so there was no room for the tower to start leaning in any direction. Let dry overnight. 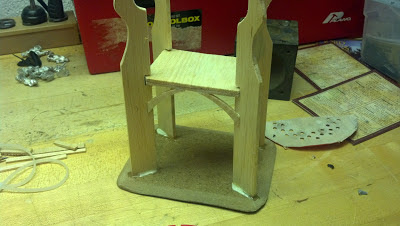 Next I glued in the decorative supports. I had to sand the back corner where it attached to the support posts to make a smooth fit. Oops almost forgot at this point I also did a textured ground with Gel Medium/ mixed with sand. 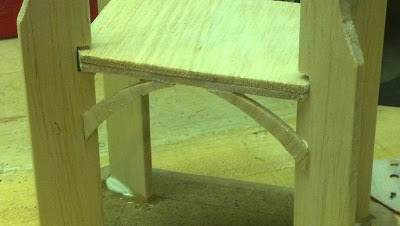 While that was drying I started on the roof. I didn't read the text of the instructions and could have just made the roof out of card stock, but had already cut out Balsa wood. The Cardstock would have been easier as you can just tape it together. I had to glue the roof together, after taping it. Better to just use the cardstock. 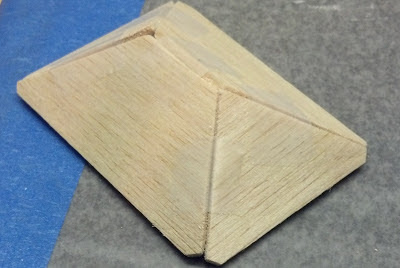 Next up are the sides of the tower platform. You have to cut out the wall panel, support post and a front and back piece. The wall panel is one piece that you score with a pen to make it look like it's several planks. You alternate the support post and wall panels. Gluing a strip of balsa along the back and front to hold it all together. I also ran a bead of glue between the wall panels and support posts. You make a section for each side. On one side you have to leave space for the ladder. 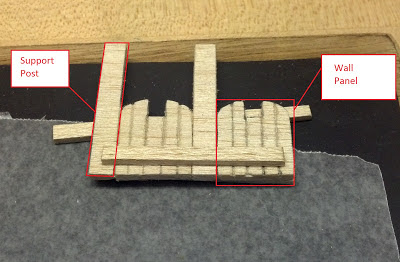 Now Teddy Bear Fur time. Using the same template pieces you had for the roof, cut out your Teddy Bear Fur to match. Glue to the roof. Take as much care as possible to cover the seams. Once this is dry the instructions say to use a one to one mixture of white glue and water to wash down the fur. This will give it a "thatched" look. I just eyeballed it, kept adding water or glue till I got a consistency I liked. This took a long time to dry. 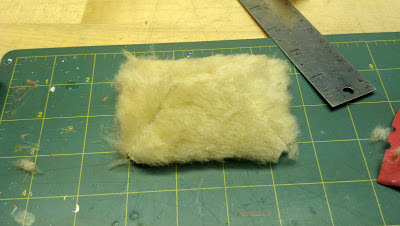 I did a test fit with the roof on the tower, and there was a big gap between the roof and the top of the support posts. So to correct that I cut 4 pieces to go along the top of the support posts. Then sanding the back corner to make them fit flush to the main corner posts.This covered the gap and looked pretty good. You can see an unpainted Eowyn in the tower. You might have to trim back the corners of the roof to fit snug. I had to. 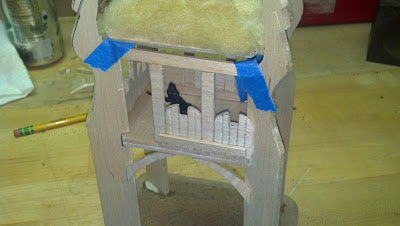 That's it, ready to paint. Oh wait, I did the ladder with just strips of balsa wood, easy peasy. I did a dark brown(Americana craft paint: Asphaltum) on the tower with a drybrush of Gray (GW: Dawnstone). The fur roof I did with....uhm I can't remember. But it was a yellow brown then drybrushed with the same yellow brown and White mixed in. 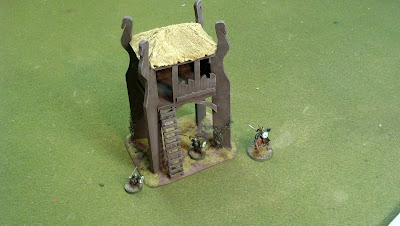 Add in some Army Painter grass tufts, Poison Ivy and some static grass and your done.(Link) 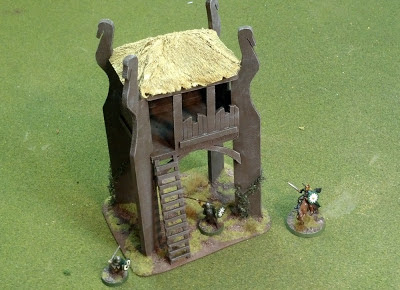 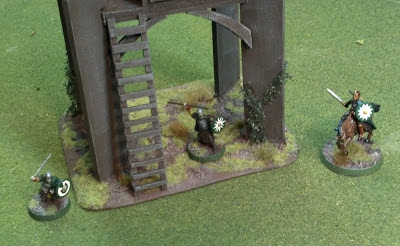 I'll have a Battle Report up soon.

As for the rest of the stuff I needed. I had to sub in some non Rohan buildings for my village. A good friend of mine, Dowvoovoo, painted up the Warriors of Rohan and I did manage to squeeze out 18 Riders of Rohan. For the Uruk-hai, I cheated and bought some painted stuff off ebay. I'll post up some pics of the Riders shortly.

If anyone wants the file of Rohan Buildings leave me a comment. And I'll try to get that out to you.