First game of Song of Blades and Heroes 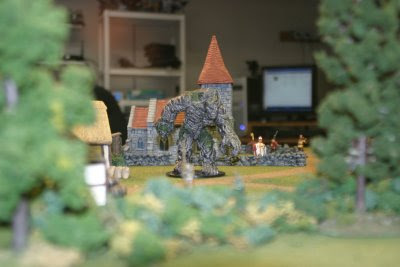 So my good friend Lou and I wanted to play anything since we haven't played a game in quite awhile. I suggested Song of Blades and Heroes. He agreed and it was on!

Now I will admit up front I did not have high hopes for this system, but was just looking for something easy to play a quick game. I bought the very cheap PDF when the game was released. I had a nice print out from my wife who was kind enough to donate her work printer(lol). I read the rules and it just didn't seem like a good game with all the activations and such.

For those that don't know how to play, everytime you want to move a figure, you have to roll to activate. So to move/shoot/ cast a spell you need to roll your activation. You can choose to role 1, 2 or 3 dice. Each time you role at or over your Quality rating you get an action. But if you fail 2 rolls, you lose your turn. For example, I had a Cleric, his Quality was a 3. I would roll 3 dice, and get 3, 1, 4. So I got 2 actions that turn for the Cleric. Now troops with lesser quality, you would roll less dice, so you didn't lose your turn. Example, I had 2 Hunters. Quality was 4, I only rolled 1 dice each turn for them, so even if you didn't activate, you didn't lose your turn. I could have rolled 3 dice if I wanted too, but the worse quality, the higher the chance of ending your turn.

Now onto the battle. I set up a little village in a 3 foot by 3 foot table section. It had a stone church with some small farm buildings around it. We went with stock troops out of the back of the book. My warband, was a Cleric, Earth Elemental, a Thief, 2 Militia and 2 Hunters. I sort of had in mind my friend Lou raiding my village and the Cleric and Militia with a "summoned" elemental defend the village. In the rules, the Cleric can't summon anything, I just paid the points for Stompy and the rest was fluff. Lou's warband consisted of an Elf Hero, 3 Wood Elf Archers and one Wood Elf Warrior. 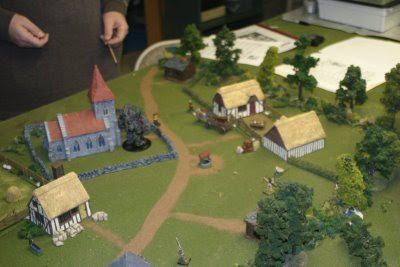 I randomly scatter my warband around town. The Elves emereged from the woods on one side in a line. They head towards my Earth Elemental, Stompy. My Thief slips around the back of the farmhouse and the barn. My Militia and Archers slowly move forward and Stompy heads towards the elves.

Most of the Elves attention was on

Stompy. They went at him hard. The Elven Hero didn't waste any time coming for him. Much to his dismay. I squished him very early in the fight. I did get knocked down a couple of times, even wounded.

While I'm waiting for my militia and archers to come up, The elves continued their assault on Stompy. Next up was the naked elf with a bow. She attracted Stompy's attention by knocking him down with her bow. If you beat someone in combat/shooting, but don't

double(kill) you knock them down if you rolled even, knock them back if you roll odd. Well Stompy had a quality of 3, so I would roll 3 dice every time. I got 3 activations, I stood up, walked over to the naked elf and stomped her.

I thought my Thief which had stealth was safe sneaking along the barn wall. Turns out he can't be shot at, but naked Elven chicks with spears can walk right up and run him through.

The elves responded by charging the Wood Elf Warrior over to Stompy. I eventually got my militia and archers up. One by one I surrounded the naked elf with the spear. They were crappy in combat alone, but each additional person in combat is a -1 to the enemy's combat score. So I got a knock down result and killed her. 2 knock downs= a kill. Four big bullies to kill one little elf, my friend gave me lots of grief.

Stompy kills the Elf Warrior. Now the only thing that is left is one Elf Archer. Stompy starts to move out. The problem with Stompy is he's been wounded by now. If you have the "Tough"

attribute, anything that "kills" you is treated as a wound. Wounds hurt your quality rating. I started at a 3, by the time I killed the Warrior, I was at a 5, your dead at 7. So now I'm rolling less dice and not activating as much. I can't close with the Archer before he knocks me down, and kills me. I tried to get my Cleric over to heal Stompy but I would roll 3 dice and get 2 failures and end my turn. The tide was turning.


I finally realize that my cleric had the same Combat skill as the Archer, a 3. Up until now I was hiding him. So I activate my cleric and bring him forward. I left my militia and archers behind as

I thought I had this wrapped up, and it was getting late, and they were crappy troops. I confidently engaged the archer. We had a very epic battle going back and forth. Just when one of us thought we were going to win, we would roll 2 failures and end our turn. This went back and forth for about 10 minutes. Finally after knock downs/ knock backs, and such. The archer who had been knocked back the turn before, drilled an arrow into the Cleric's chest and it was over.

I still had 4 more crappy guys, but it was late and over. Since Lou had to drive home I claimed a moral victory in that I held the "field".

It was a fun game. Much more fun than I thought it would be. The way the activation plays out can be fun and make the game's outcome twist and turn. I have to say I might buy some of the additions that have come out since it was first released. I also see some house rules I'd like to add, which the simplicity of the system makes it very easy to add to. I'm sure we did some things wrong but it was still fun and that's the point, and I got to use that very cool D&D Mini Elemental I bought off Ebay.