Frostgrave Table for Fall In

I started work on my Frostgrave table a few weeks ago, but since I am also doing a table for The Battle of Rivoli, as well, I got behind in my blogging.

So here are some shots of the work as I go along. Some of the terrain I already have and some I am building.

I also have some shots of the warbands I have been working on. Frankly I'm starting to think building 2 tables and painting the 8 warbands was a little too much. It will get done, but I will be exhausted going into the convention and my wife started in an annoyed state that will be moving to pissed off. 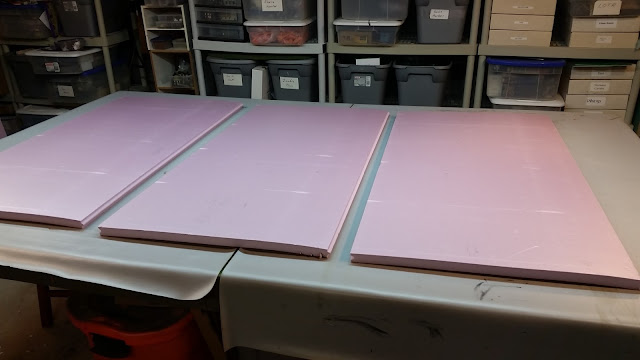 I wanted to give the ground some texture. I wanted to break up what I call the golf course like battle table. This is a piece of coral that was in my garden. I roll it around pressing down into the foam. 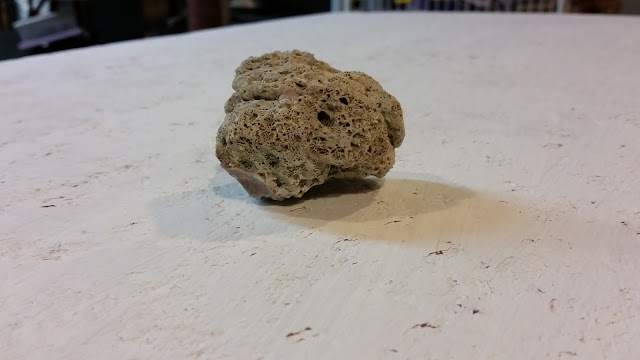 The irregular patter of the coral makes great indentations in the foam. I use a glove as it will dig into my hand as well. 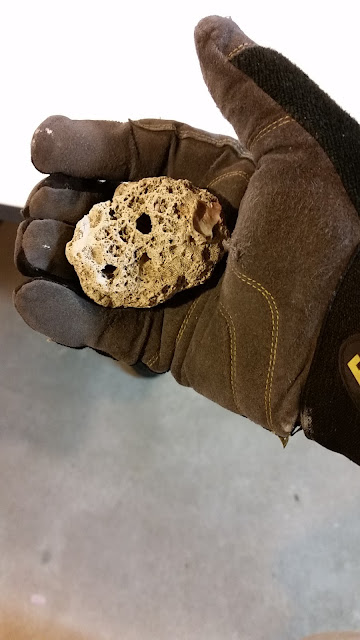 It's hard to see the texture in a photo. I think this shot does a decent job of showing the texture. 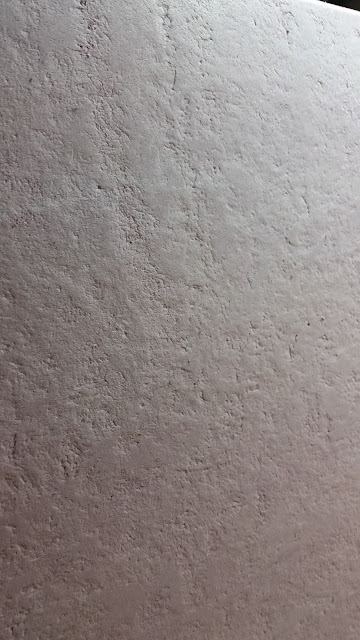 Now this was attempt number 1 of painting the board. Looked like crap, then I tried dry brushing white on top, but it was still too blotchy. I'm on attempt number 3 of the board, but forgot to take a picture. 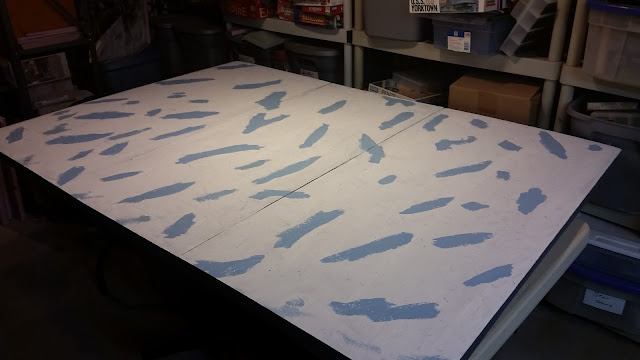 Here is a building I'm putting together. The front piece is a GW terrain set from there new Age of Sigmar line. I've added other elements to flesh out a more complete ruins, like the Reaper arch in the back of the building. Balsa wood timbers and Pegasus Hobbies bricks. 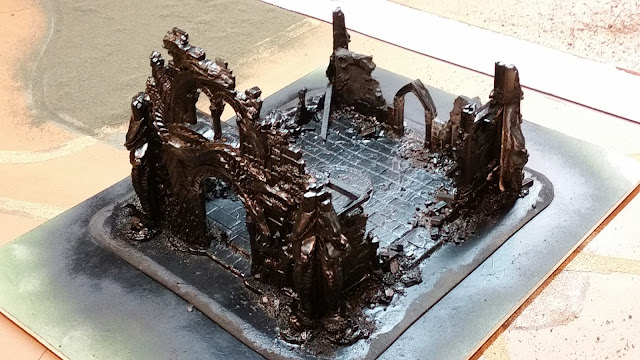 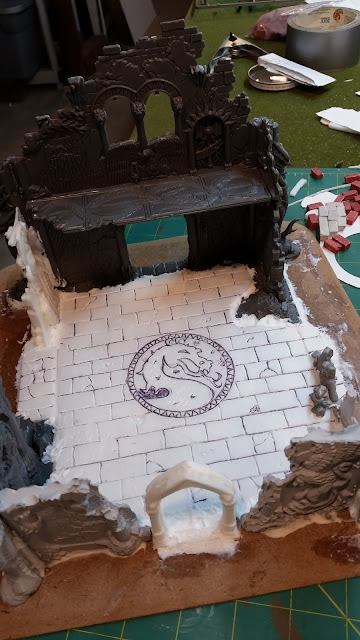 This is a Pegasus Hobbies Gothic Building set. I used foam core to make a floor and added rubble along the edges. I need to add more. 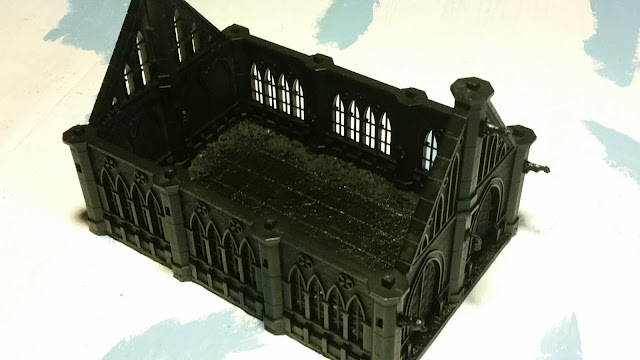 This is my Trollkin warband, Lead by a Witch, this a tribe of Trollkins(troll/human mixed race) from my D&D world. I took inspiration for the matriarchal warband from The 13th Warrior. Witch on the left, Apprentice on the right. 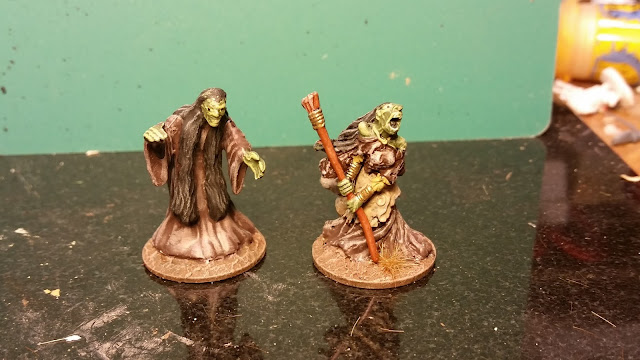 Here are the Trollkin Warriors. For Frostgrave we have a Man-at-Arms, 2 Thugs and a Treasure Hunter(left to right). 3rd from the left was an archer, but I need another Thug, so I cut off the bow and added a sword from my bits box. 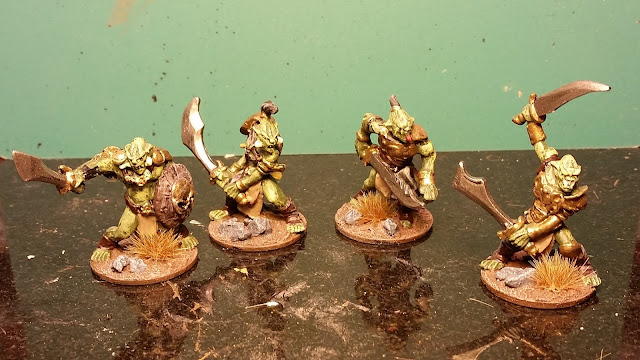 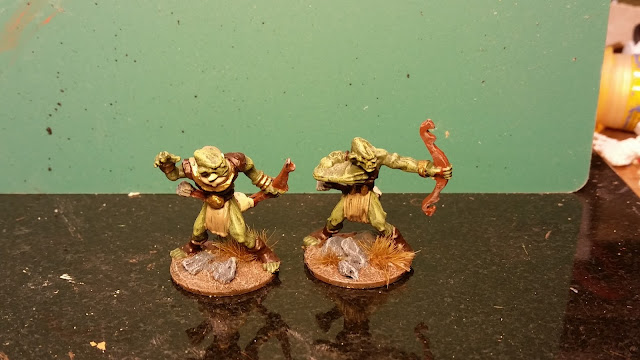 And here's the Witch with her "Animal Companion". I figured a large full blooded troll would be thematic, but on the table it will just be a Bear. 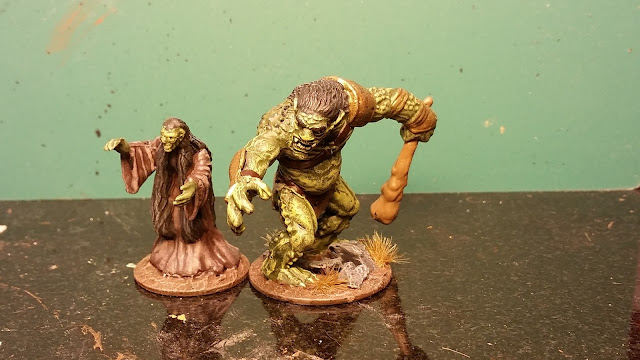 Here's the whole gang together. 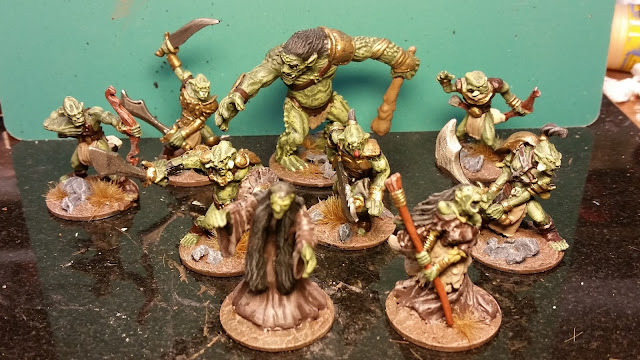 That's all for now. I hope to have more pics up Friday or Saturday.

Next Warband for Frostgrave

I finished the 2nd warband for my Fall In Frostgrave game. It's the Necromancer warband with skellies. Now these skellies are old old Games Workshop figures, from 1985! Doing the math that makes them 30 years old. Oh lord, have I been doing this that long....

Setting aside laments for getting older, here are the pics: 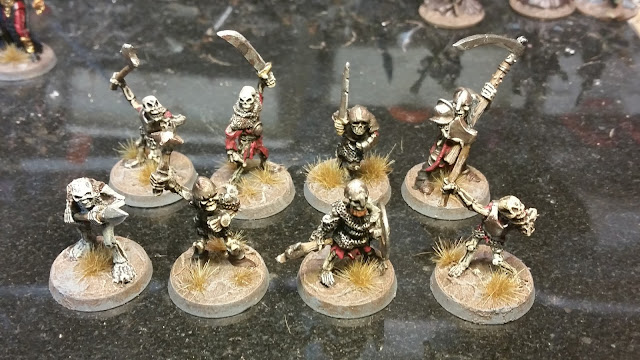 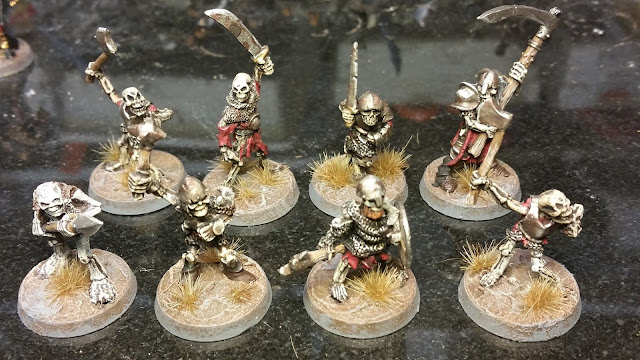 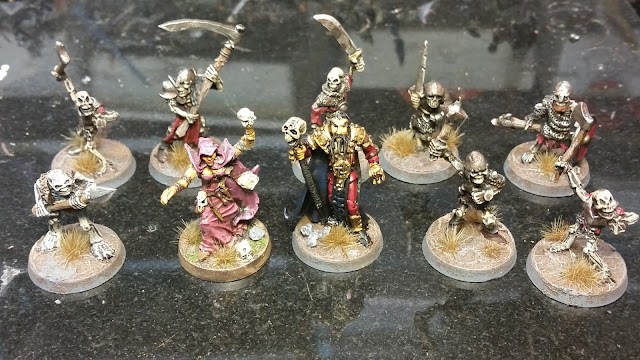 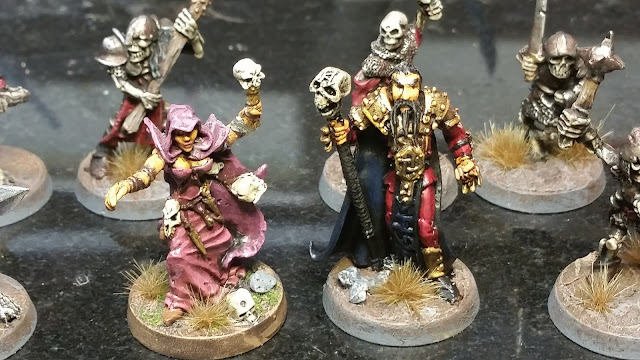 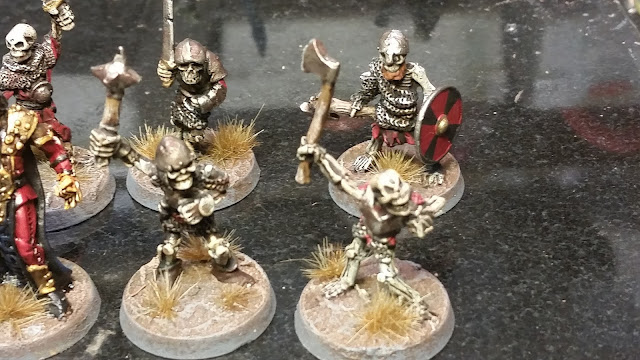 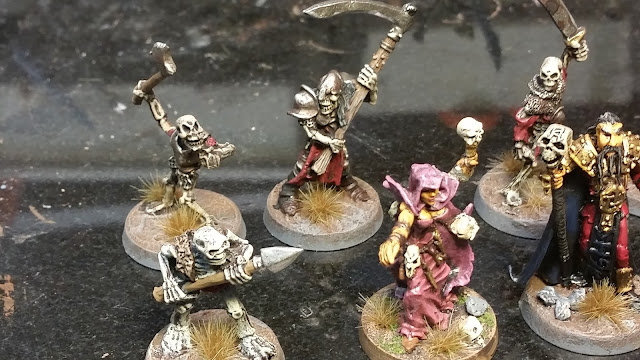 Next up is my Trollkin Warband, should be done tonight. The wife is doing girls night out, so I'll be left alone to paint and not watch some stupid TV show.\

I'm running an 8 Player Frostgrave game at Fall In. Just 2 short weeks away. I feverishly painting up terrain and warbands.

Here is my first Warband that I use at Home. I painted the base warband and future upgrades. Unfortunately I have had time to take them out for a spin, real life is getting in the way. But they will be at Fall In.

I've had these GW Acolyte figures for 25 years. I always had the idea of a Wizards bodyguard for my Empire Warhammer army. Never got around to painting them. Frostgrave is the perfect setting for them. So I dug them out and made some small conversions. 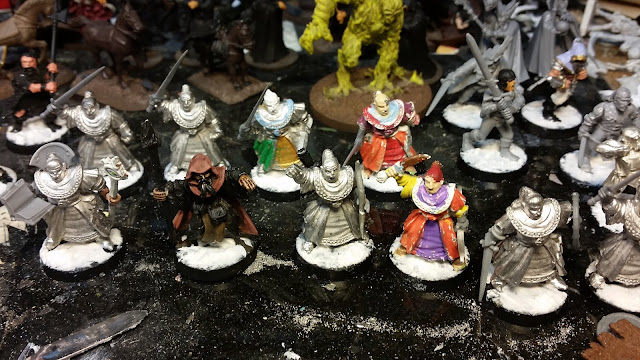 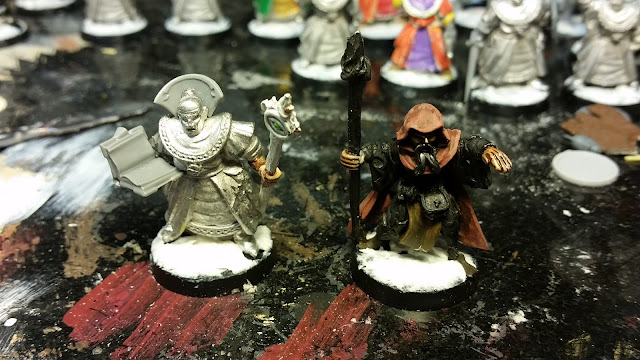 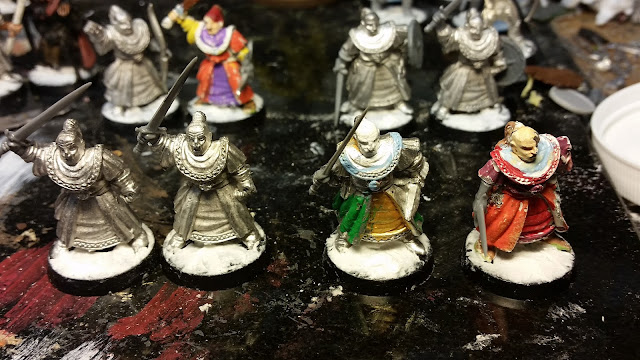 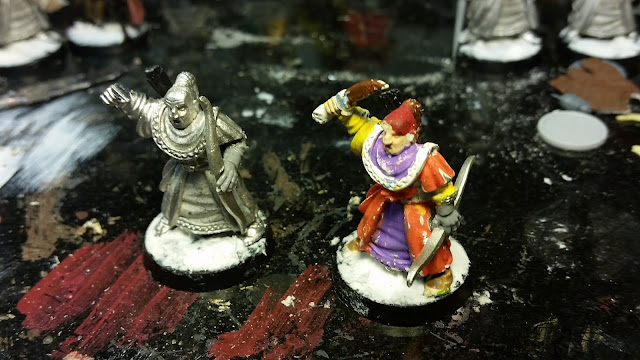 These are GW Militia as Treasure Finders and Infantryman. Behind are Acolyte Man-at-Arms 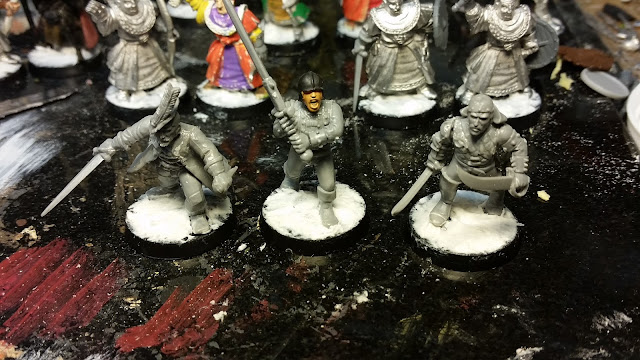 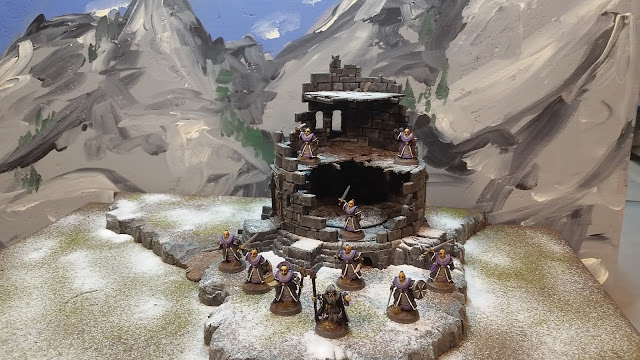 All painted up and ready for their photoshoot 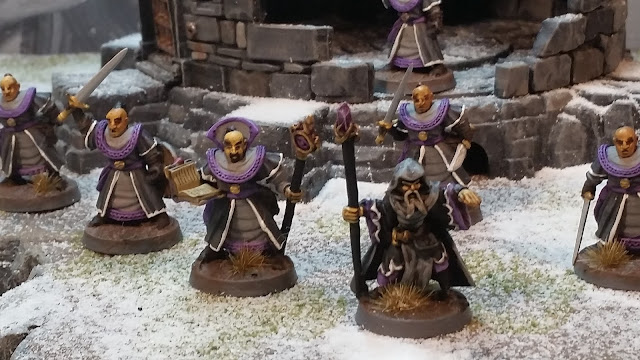 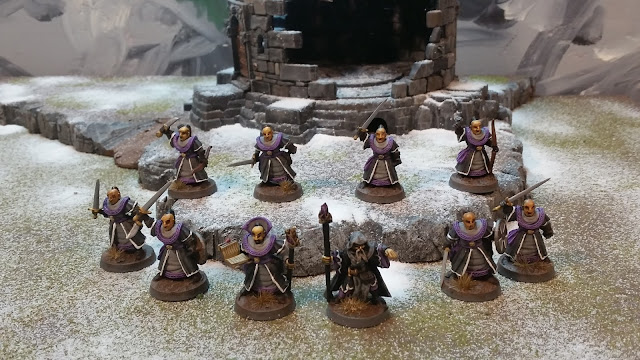 So for Acolytes I have 4 thugs, 2 Archers, 2 Men-at-Arms, and an Apprentice 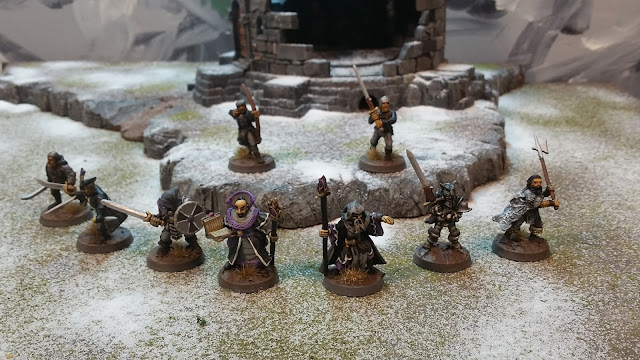 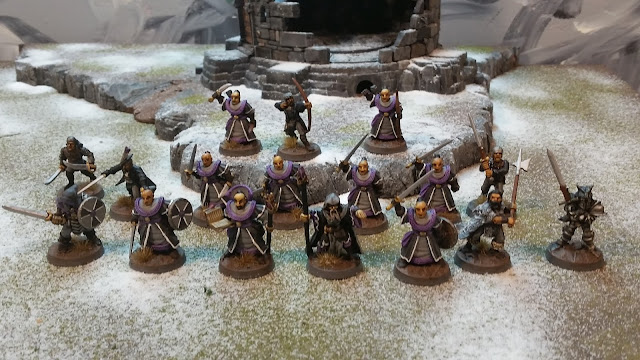 Wow it's been a long time since I posted. What a busy summer getting 2 kids off to college for the first time. Now that the dust has settled I'm turning my attention back to wargaming and blogging.

I have 2 things on the horizon, both of them involving Cold Wars in just under a month. The first is building a battle table for the Battle of Rivoli game that my friend Alan will be running. And building my Frostgrave battle table for the game I am running. I will be posting updates about those builds in the next week or 2, so check back!

Setting that aside, I wanted to post some comparison pictures of Frostgrave Soldiers and GW Mordheim figures. Some are painted, some are soon to be painted.

As you can see the old GW figures are a little beefier, but not so much that they will not work together. So feel free to mix on the table or even in the same warband.