As previously mentioned in my blog, I hit Garage Sales almost every weekend. Over a year ago I found a piece that just screamed "make terrain out of me". After feigning mild indifference to the nice lady running the garage sale, I made an offer of 5 bucks. The bargain was struck and I was the proud owner of the T-Wrecks Hot Wheels Playset. 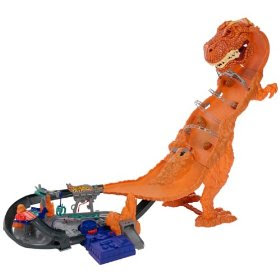 When I got home I ripped T-Wrecks head off, saved a few small bits, but threw most of it away. I really just wanted the head. I put the head on a shelf till I had a good idea what to do. It sat for over a year till I came up with my idea, A Lizardman Temple. Or just the entrance part. I must confess at this point that I was very lax in taking pictures of the WIP. I'm kicking myself now. 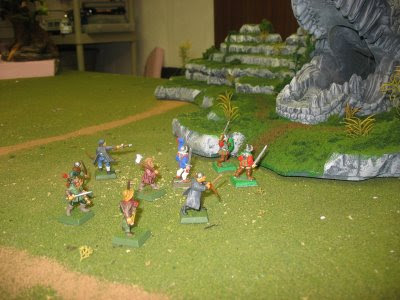 I'll just briefly go over what I did with pics of the Temple thrown in. I took a 2x4 sheet of MDF board and cut an irregular pattern on one side. I left other side untouched as it's meant to be a board edge piece of terrain. 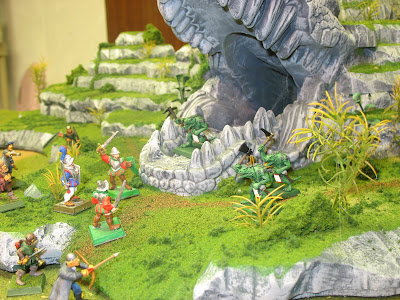 Then I spent a few nights gluing down pink foam insulation board building up the cliff. It might be over kill but I used Liquid Nails cause I like how fast it drys. I used a Woodland Scenics Foam cutter to shape the pink board. 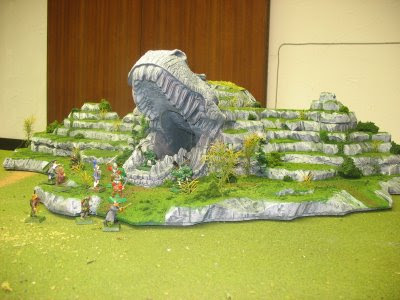 Once I had all the pink board down, I needed to fill in cracks. I tried 3 different things. First I tried Woodland Scenics Foam Putty. Very odd stuff. It looks like it would be good for different things but it took days to dry. Then I bought some Spackle in a tube, for wall touch-ups, too hard to squeeze out of the tube. Last I went to tried and true Elmers Wood Putty. works like a champ. 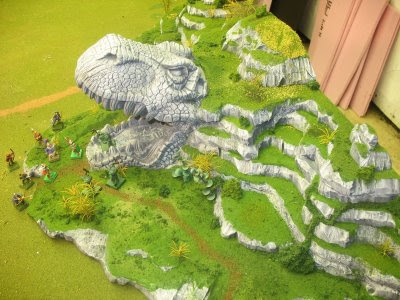 Ok the boards are cut and glued, cracks filled in. Now to the paint. I know some paints can "melt" the foam board so I "seal" the board with plain white Latex house paint. I had a lot of stone surface to do so I bought a small can of model spray paint, dark gray. Dry brush on 2 lighter shades of grey and the stone is done. 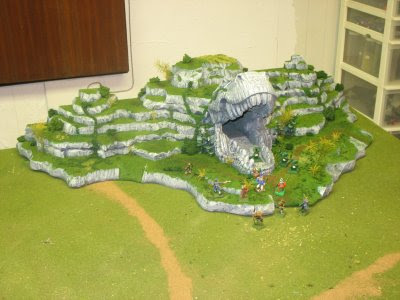 My "grass" method is very simple. I just paint the grass areas with a generous amount of Green paint and pour a ton of flocking onto it till it drys. Shake off the excess and dump it back into my grassing bin. I go back with different colors and put those down with a white glue spray. This helps self the grass and adds different shades to avoid the "golf course" look. 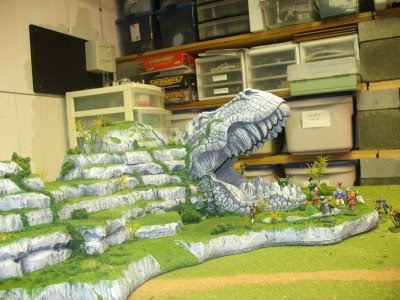 Now I go and add more vegetation with a hot glue gun. Some is Woodland Scenics Foliage, and some Walmart Plastic plants, cut up and painted. I add some "creeping vines" with dark flock and a hot glue gun. And that's it. Oh I forgot to mention and you can't see from the pics, the mouth opening is a passage that goes thru to the back of the piece. I toyed with adding a 2nd board with the temple proper, but our dreams are large and our free time is limited. Hope you enjoyed the pics.

A friend of mine, Troy wanted to try out a game he wants to put on at a local con, NJCON. He's been collecting tons of Star Wars Miniatures and wanted to game with them. He put together an Imperial force to attack a Rebel base. Pretty straight forward at first look, but the out gunned rebels called in some allies from SICON. In the form of a Starship Troopers detachment.

The rules are mostly Starship Troopers with a few modifications for things like Jedi. Everything else can be squeezed into SST existing weapons/troop types. We had a lot of fun.

The Rebels were set up on the table in defensive postions and the Imperials had to advance onto the table. In the forward zone we had militia in bunkers, rebel troops behind hard cover. and 3 automated Pillboxes. The rear zone had 4 Cougar Exo-suits, a Chas, a Marauder, 2 Powersuit squads and 2 squads of Jedi. This was a test run, so the final game will change a few things. Like the Jedi, Initially they were in squads, but that will most likely change.

The Imperials deployed about a foot deep along the short side of the table, in a high grassy area. They had 3 AT-STs, LOTS of STORM TROOPERs and a few Dark Jedi. For support(random roll to call in) they could have an AT-AT, or Orbital Artillery Strikes. 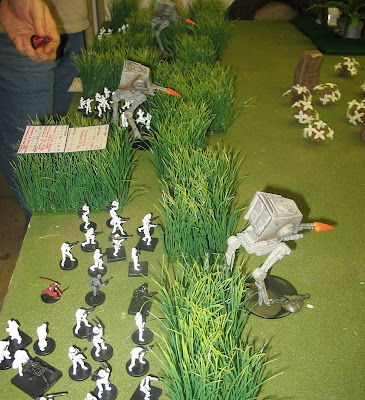 Early on not much happened, the Imperials cautiously advanced. Our Pillboxes were the only thing that had the range at first, so we plinked away at the AT-ST's. The Imperials I think on the 2nd or 3rd turn rolled for support and got big momma to come on the table. 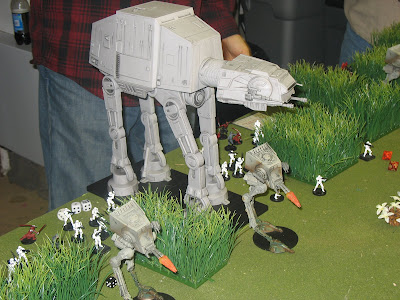 Once that hit the table, my personal strategy switched from just kill all Imperials to bring that bad mother down. I have to say it was a bit chaotic as a play test game, since my friend brought his son and daughter to play, and I had my 2 girls to play as well. This chaos caused the death of many Jedi. One of the kids had one squad of Jedi all together when the Imp's got a support roll, and the orbiting Star Destroyer landed a direct hit on them. 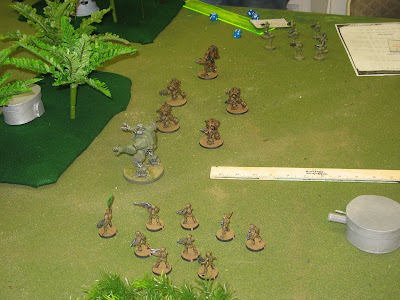 We brought one of the AT-ST's down on the right flank, but Big Momma was still unhurt. She moved up and started tossing buckets of dice at our defending Militia and Rebel Troopers. It was ugly. But by now I had my Exo-suits up and the Chas. So we started throwing buckets of dice back. There was a woods on the right, 2 Imperial squads and a heavy weapon moved up through those. I met them with a Chas and a Powersuit squad. Plus they had to advance past a Pillbox. Lets just say they didnt make it out of the woods. 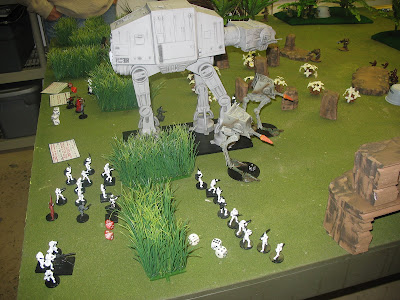 Around this time we lost a Powersuit squad to a combination of Big Momma and another Orbital strike. My Exosuits were down to one guy. The Marauder was gone. It was looking very grim for the Rebels, but the Imperials were not taking advantage of the situation. They didn't push forward fast enough.

The GM seeing the Rebel Situation gave us some reinforcements, in the form of 3 more Exo-suits and another Powersuit squad. Which I promptly lost 2 Exo's to bad placement during an Orbital Strike. We lost 2 Rebel Generals when they went off to watch the Kids Choice Award's on Nickelodeon. I guess to 10 year old girls, the KCA was more exciting.

We still had a Jedi Squad working up the left flank, I had a lone Exo coming up the middle, and a Powersuit squad on the right with 2 Missile launchers. Oh and still 3 functional Automated Pillboxes. I had been concentrating on killing the Storm Troopers supporting Big Momma so I could get the Jedi in close, and it was starting to work. 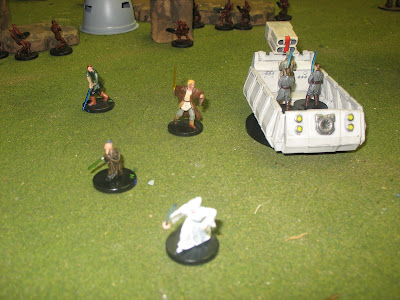 We had a scary moment when an Orbital strike landed on the Jedi again, but we only lost one. So my daughter was pushing them forward, we lost 3 more to Big Momma's massive firepower. But we got 3 up on a cliff next to Big Momma. My Daughter came up with such a cool plan that the GM gave it a chance to work. She wanted to leap on top of the remaining AT-ST, then leap to the top of Big Momma and kill it from the top. I forgot to take pictures at this point :(

The Jedi have Jump powers just like the Powersuits in StarShip Troopers game. 2 of them leap to the top of the AT-ST and make successful attacks and kill it. The GM says that they cut open the hatch and turned the drivers into goo with their light sabers. The important thing is that the AT-ST is left Standing, next to Big Momma. The third remaining Jedi(Padawan or Lvl 1 Jedi) went to chop at the legs of Big Momma. But Missed.

Big Momma can take 8 hits, 5 makes her stop walking. The Imperials were smart enough to move Big Momma away from the AT-ST so ended my daughter's cool plan, but that had the unintended effect of moving closer to my troops and farther from his support. They tried to shoot the 2 Jedi Masters off the top of the AT-ST, but missed. The last thing they did was run Darth Maul toward our Jedi to protect Big Momma.

We had one Jedi jump down to fight Darth Maul, and the other Jedi to go after Big Momma's legs. 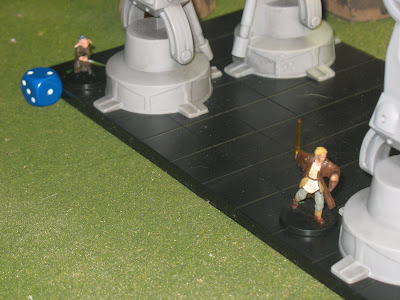 Darth Maul was just ripped to shreads by my Daughter. She got 4 hits on him, and he failed 3 Dodge rolls(he only needed a 2+ on a d6), TOAST! Meanwhile by now we had 3 pillboxes, 3 Missile launchers, 2 Jedi, and an Exo-Suit attacking Big Momma. 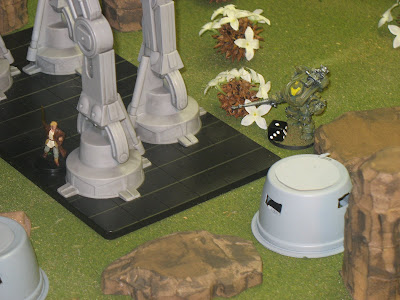 There was not much Big Momma could do. She tried to stomp the Jedi Master, and hit, but only got 2 out of 3 wounds. 2 Dark Acolytes (lvl 2 Jedi) ran up to our Jedi Master that had killed Darth Maul and landed 1 hit. A crowd of Storm Troopers gathered to watch the 2 on 1 fight as they could not shoot into the melee. 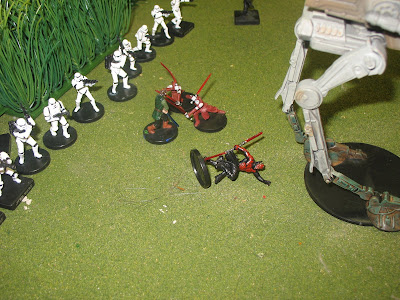 During the last turn our Jedi Master landed a hit on each Acolyte and everyone else shot Big Momma. We got 6 hits, which froze the legs. She was not within range of our base so in essence it was over. They didn't have any big guns left to pound our base. They still had a lot of forces left, and we had been ripped to shreds, but they just didn't have enough firepower to take the base.

It was a ripping good time and a very cinematic ending. The Starship Troopers rules worked pretty well for almost all of the elements of the scenario, and Troy did a super job at tweaking other stuff into them, and should be a great great game at NJCON.