I have started contruction on my next big Frostgrave table for a Cold Wars coming up in March. Here are 2 statues that will guard the Harbor entrance. Frostgrave soldiers for scale. Hard to see the aging bronze effect, that greenish patina, in the photo. 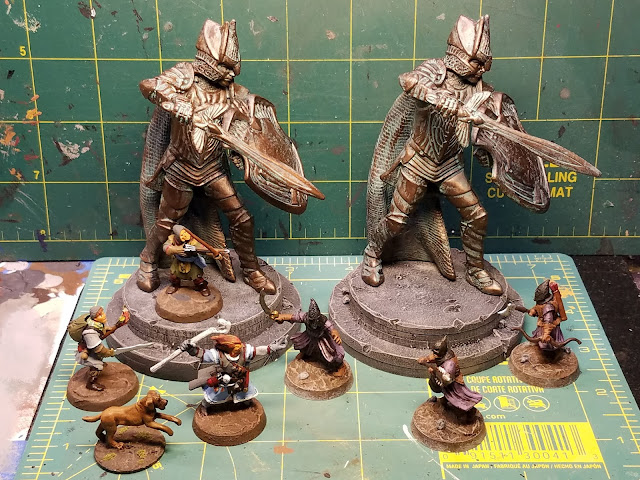 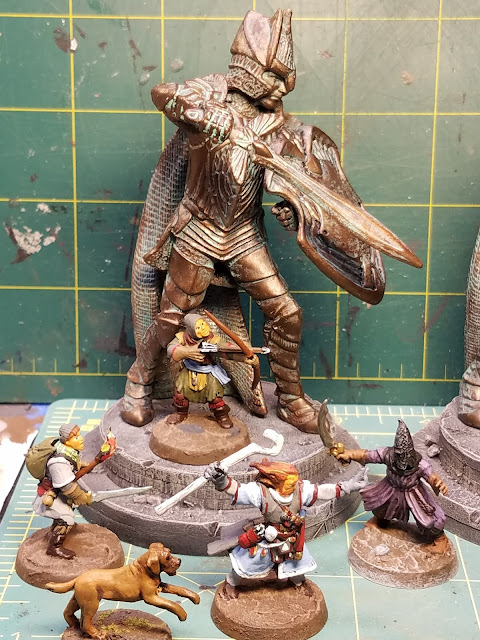 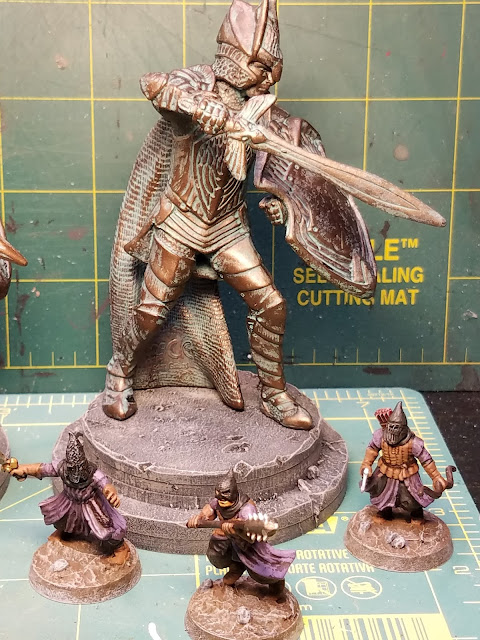 Back in December I finished my Frostgrave Gnolls and posted them on Facebook. Someone suggested making Cavalry with them and I thought that was a hell of an idea. So I bought a 2nd box of Gnolls from Brigade Games and I found a Warg Rider box in my unpainted LOTR box(really 2 or 3 boxes but lets not go there). So I was set. 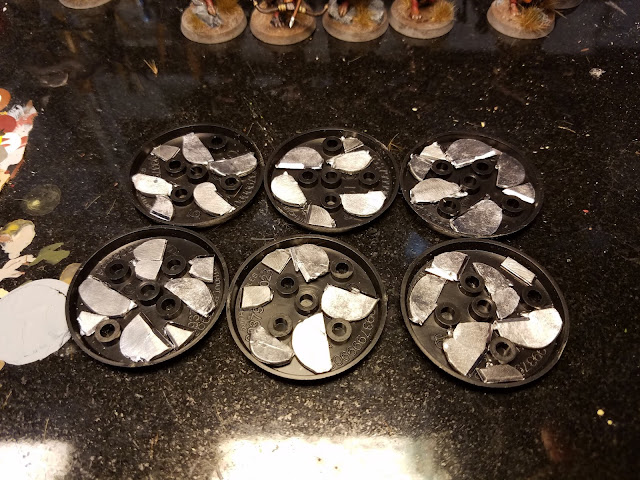 Lead fishing weights glued to bottom of base for stability. 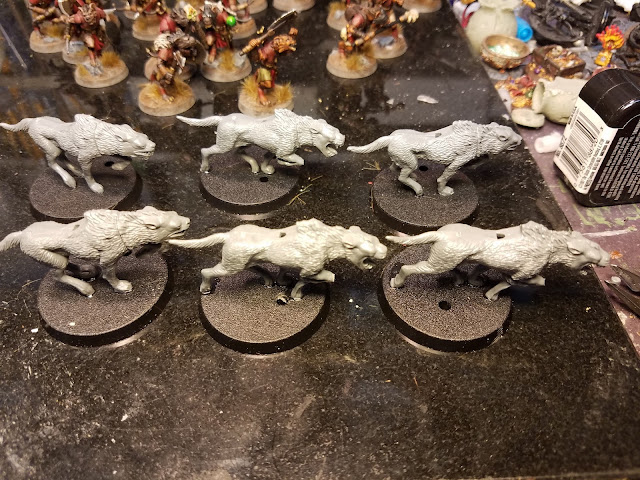 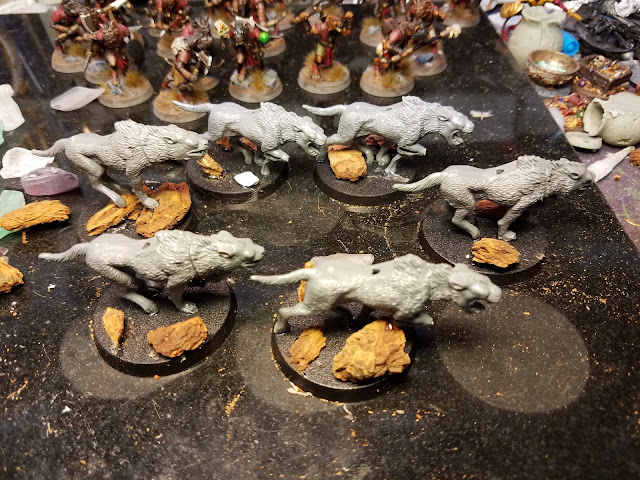 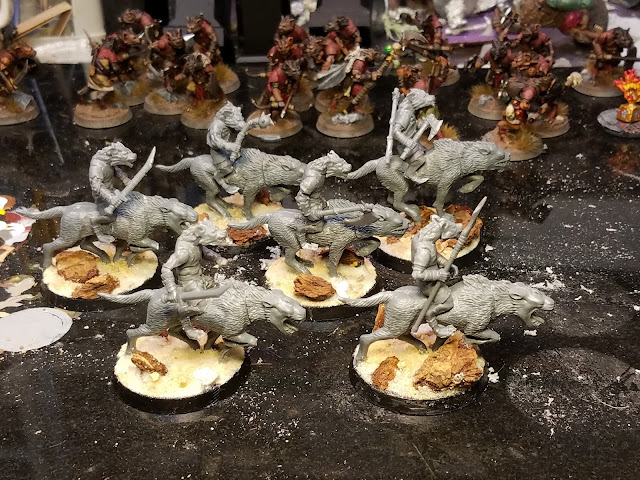 Gel Medium with sand for texture 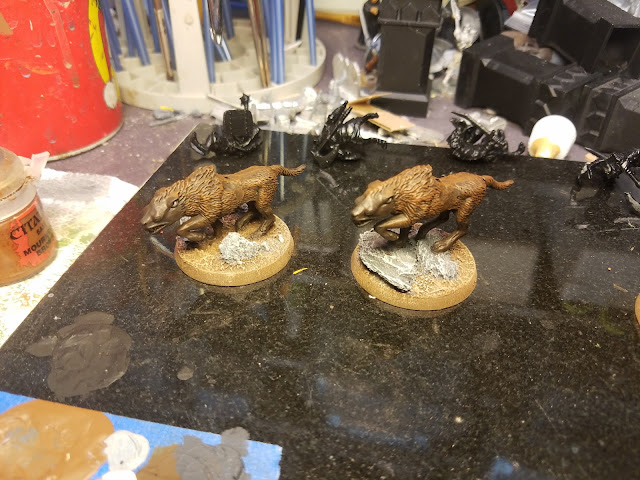 I do the bases about 95% of the way first, then start on the Wargs 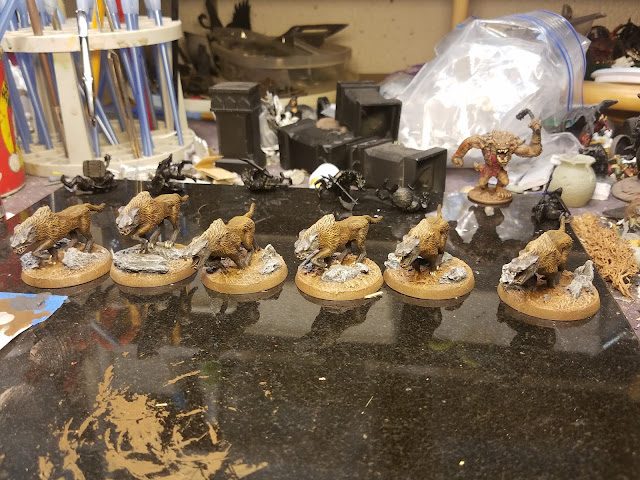 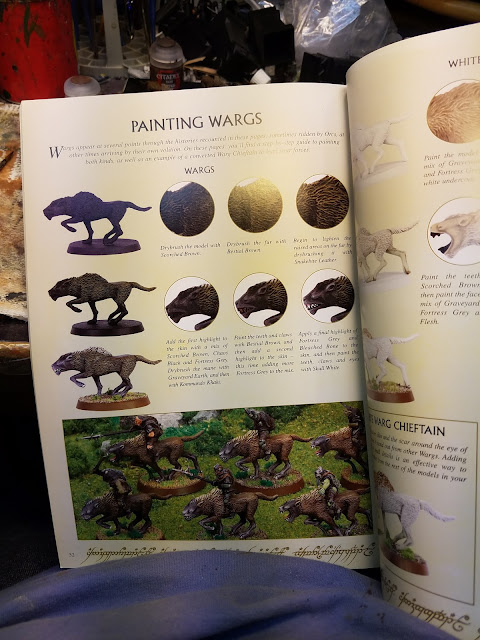 I used a painting guide from Scouring of the Shire sourcebook. Easy peasy and looks great. 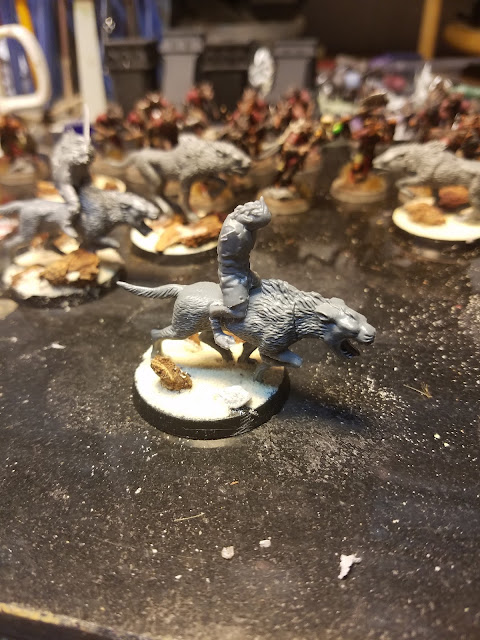 Picked a few body's that had wide leg stances. Even then I had to use a Dremel on both the Warg and Gnoll. 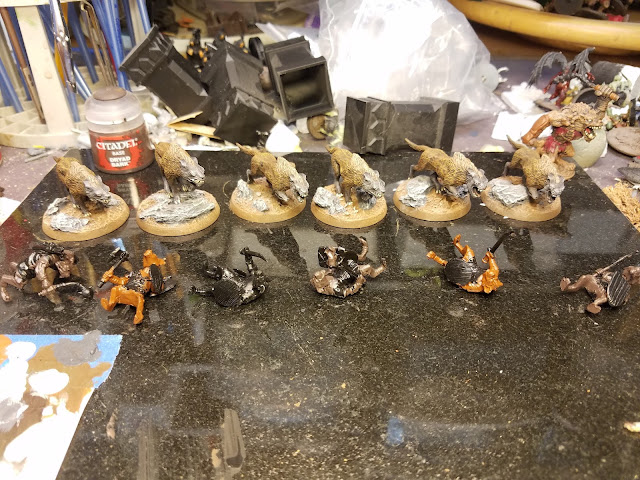 Painting underway. Using the same colors I used for the other 20 gnoll warriors. 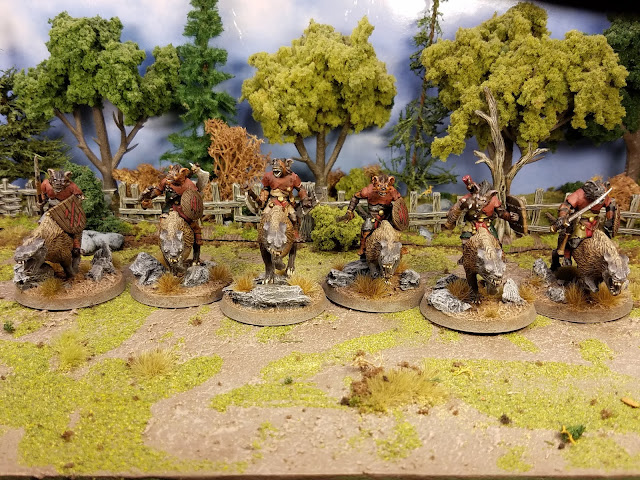 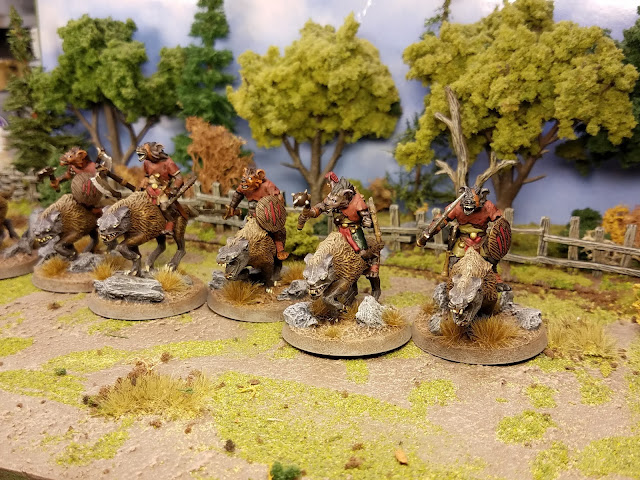 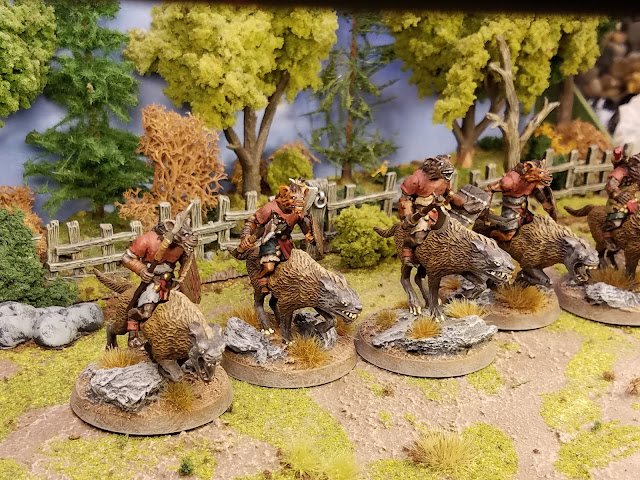 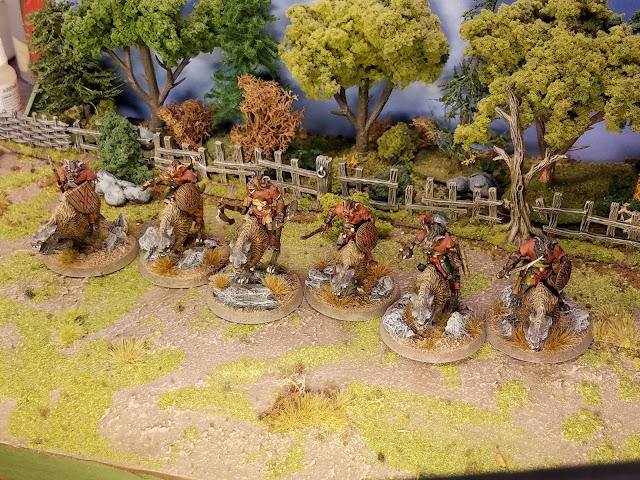 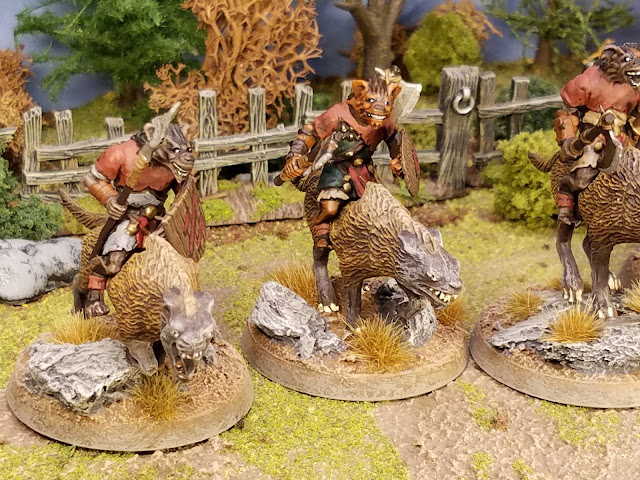 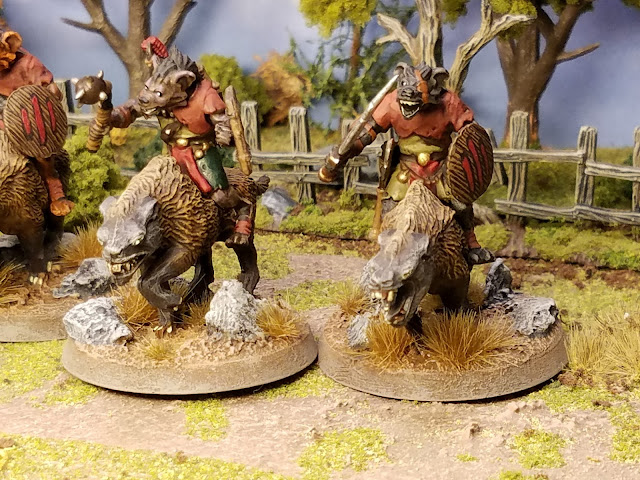 So now I have a good start on a Dragon Rampant Army. I will use the rest of the 2nd box to fill out other units. So as always more work to do.

I finished these on New Years Eve before we went out. Gnolls from Northstar Figures. I got them with the Nickstarter Deal for Frostgrave. Nickstarter is a pre-order program run by Nick Eyre of Northstar. 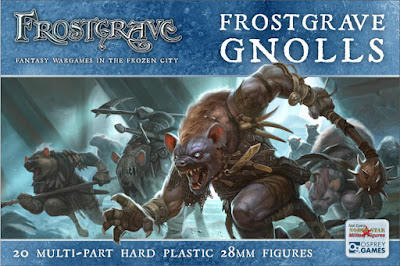 I'm actually one Nickstarter behind in my painting. I've got the Barbarians which are brilliant. I'll paint those soon.

Back to the Gnolls. You get 20 in a box, with lots of options from the sprues. In the box are 4 sprues with 5 Gnolls per sprue. Some of the options you can arm your Gnolls with, 2-handed weapon, Xbow, bow, sword, axe, dagger, and spear.

I made mine up with Frostgrave in mind, so armed as soldiers I would pick from Frostgrave.
I also converted 2 too be a Wizard and Apprentice so I can have an all Gnoll Warband.

Ok on with the pictures. 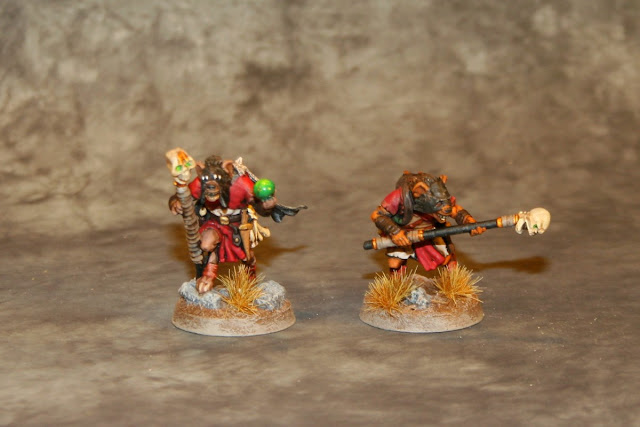 Wizard and Apprentice. Wizard Staff and Orb from Reaper. I converted a spear for the Apprentice to match the Wizard. Apprentice wearing a backpack from the Frostgrave Soldier box, with green stuff straps. 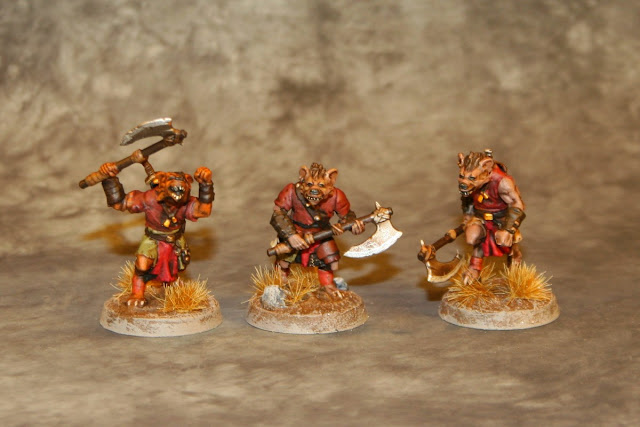 My 2 handed choppers. This will cover Infantryman, Templar, Barbarian 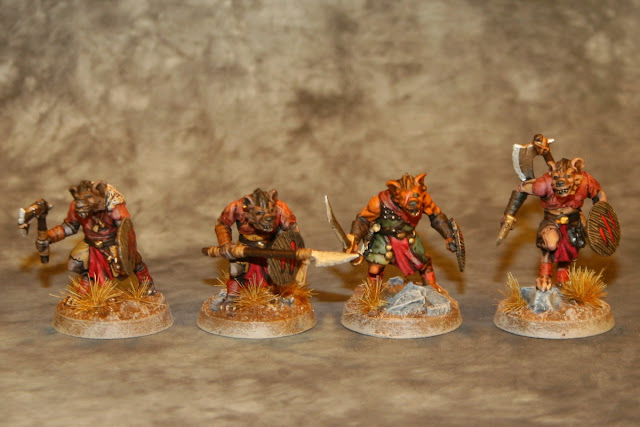 My shield bearers. Good for Gnoll-at-arms and Knight. 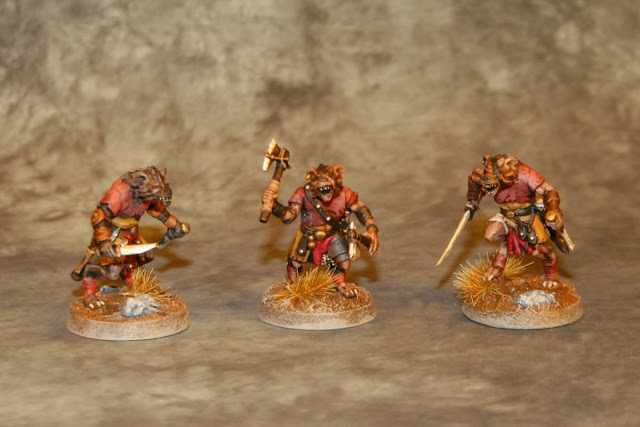 Dual wielding Gnolls. I would use them for my Treasure Hunters. Or Thief. 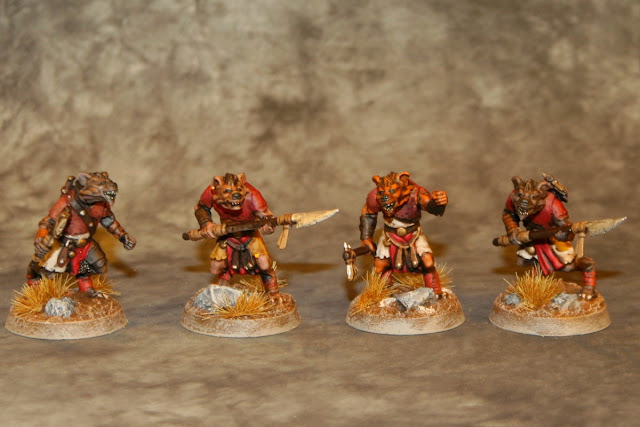 These guys just have a single weapon. You need thugs to carry all that treasure. 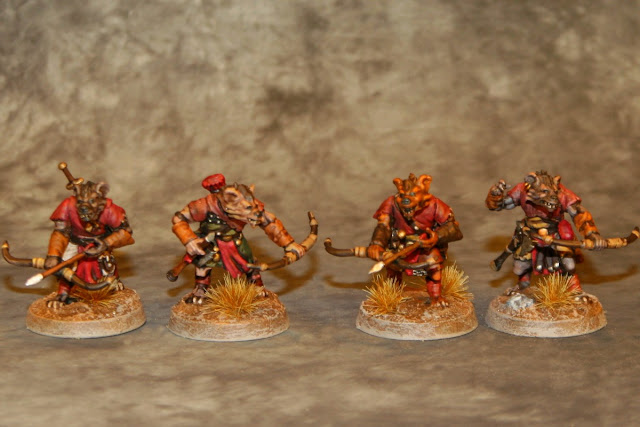 And lastly my missile support. These can be Archers, Trackers, or Rangers.

I missed some troop types, but you can make them if you want to with what's in the box. I also have some Wardogs on the way and a few other things.

Here's the whole gang laid out for some action. 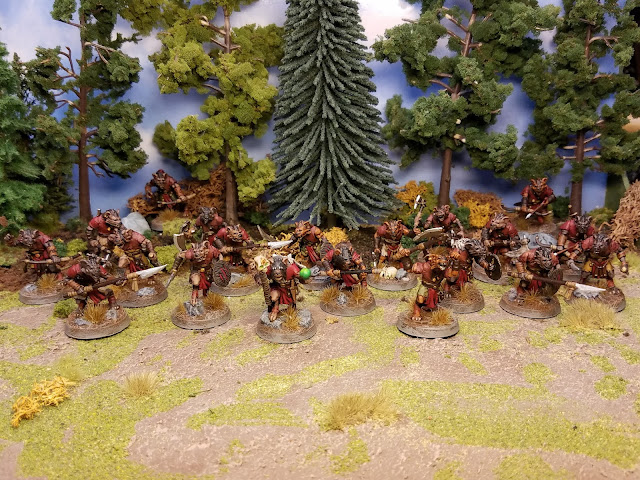 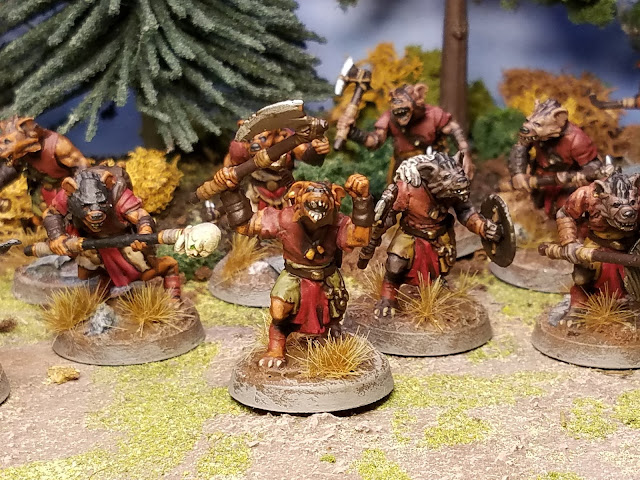 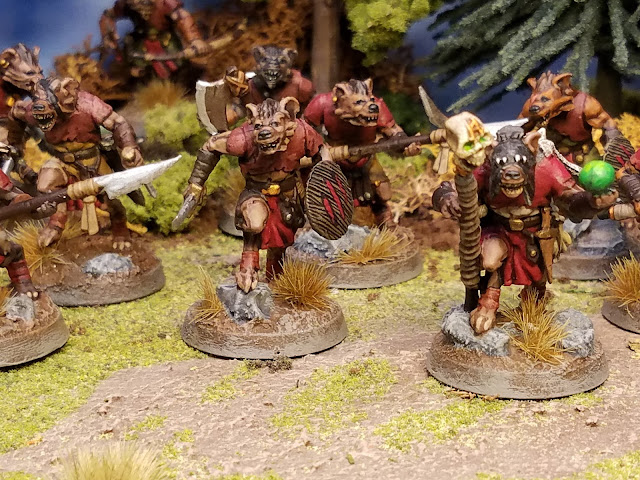 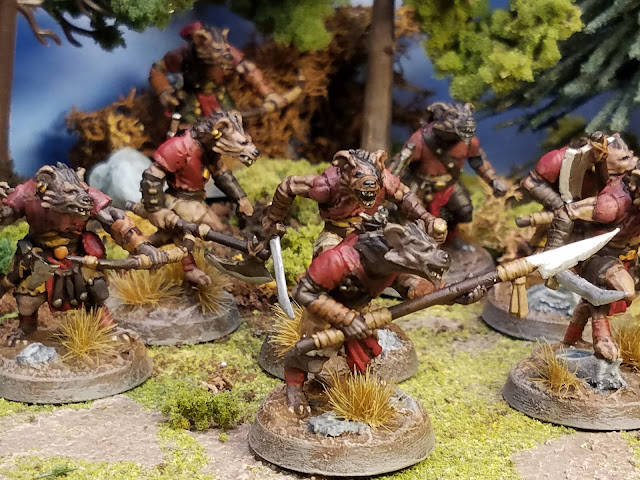 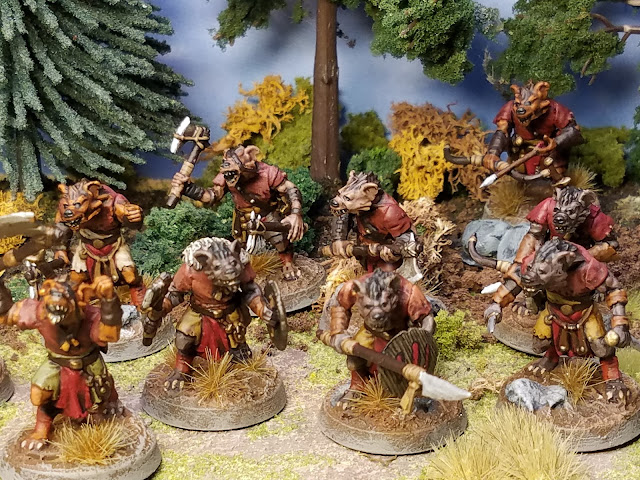 After painting these guys up, I ordered a 2nd box. I will expand this Warband into a Dragon Rampant sized force. The 2nd box will round out unit sizes. So 2 more archers for a total of 6. Three more 2 handed guys for 6, and so on. I am pretty sure I will need a 3rd box, but trying to control myself. You know, the unpainted pile has to be kept under control.