After some harrowing fights during the rescue of the local Lords son(Adventure 1), our brave adventurers spent the rest of the winter recuperating. With the snow melting, the town starts springing back to life and the trade caravans start moving again.

One day the Paladin, Stor, is approached by an old man. He is a messenger for Stor's Order. They want him to retrieve an Artifact of the Order. News just came to light of it's possible location, in the ruins of a small church 2 days travel from Harlow. To help out, the Order sent along a fighter(NPC to bolster the party). So the players load up supplies and head out.

After an uneventful journey the players locate the ruins. 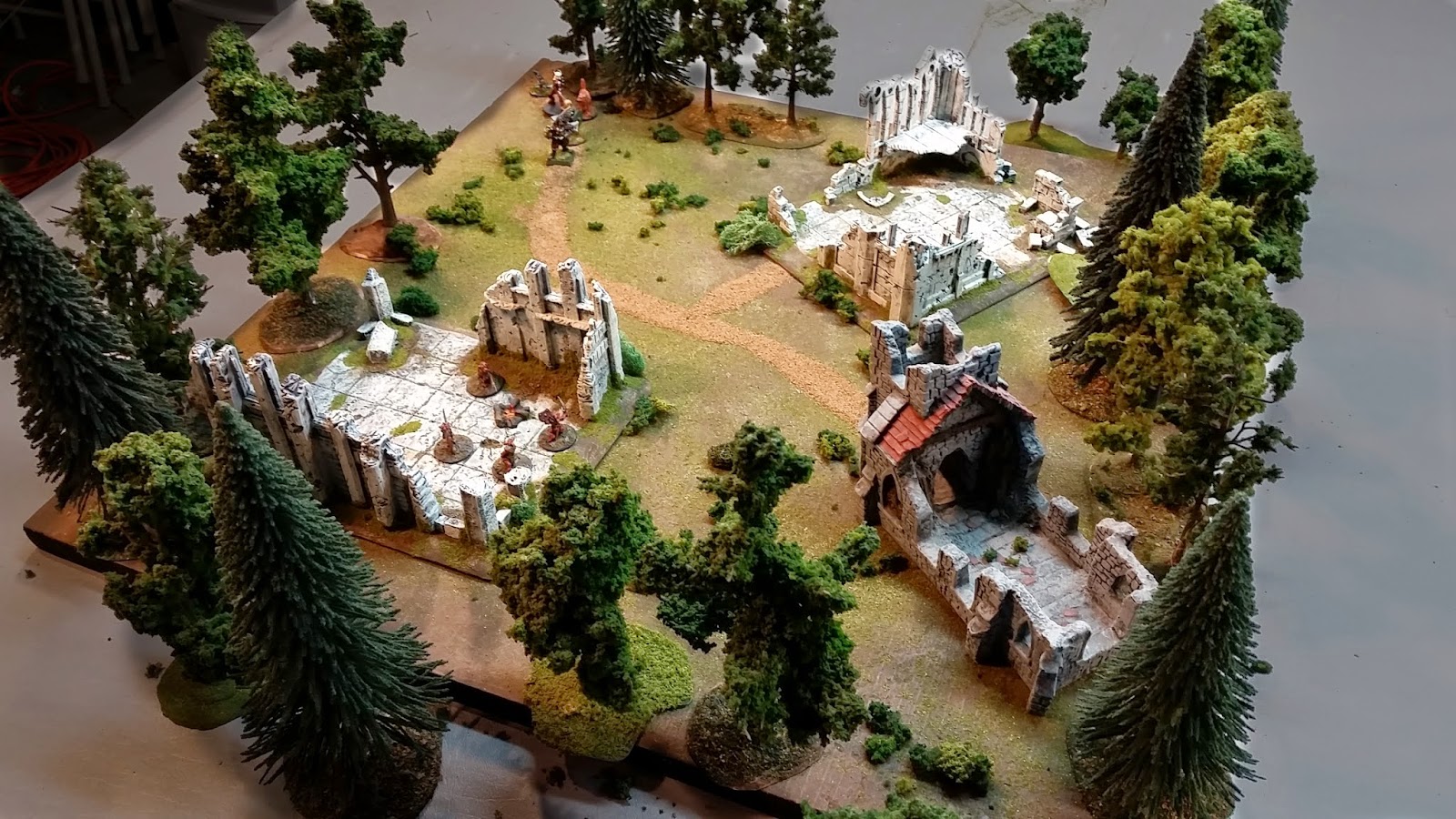 The players arrive at a clearing with 3 ruined buildings. 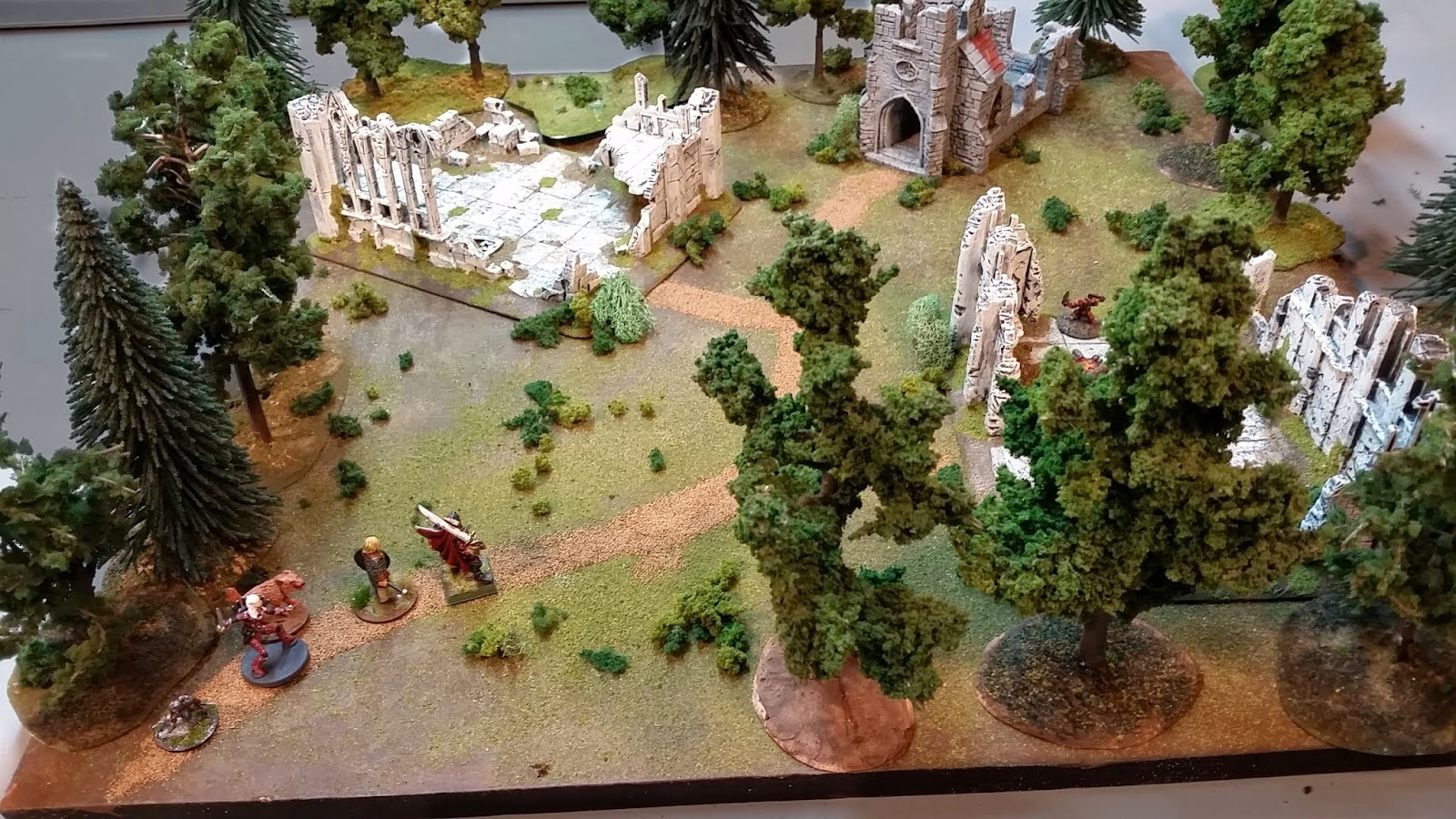 They approach the first building, only to find a pack of Kobolds. 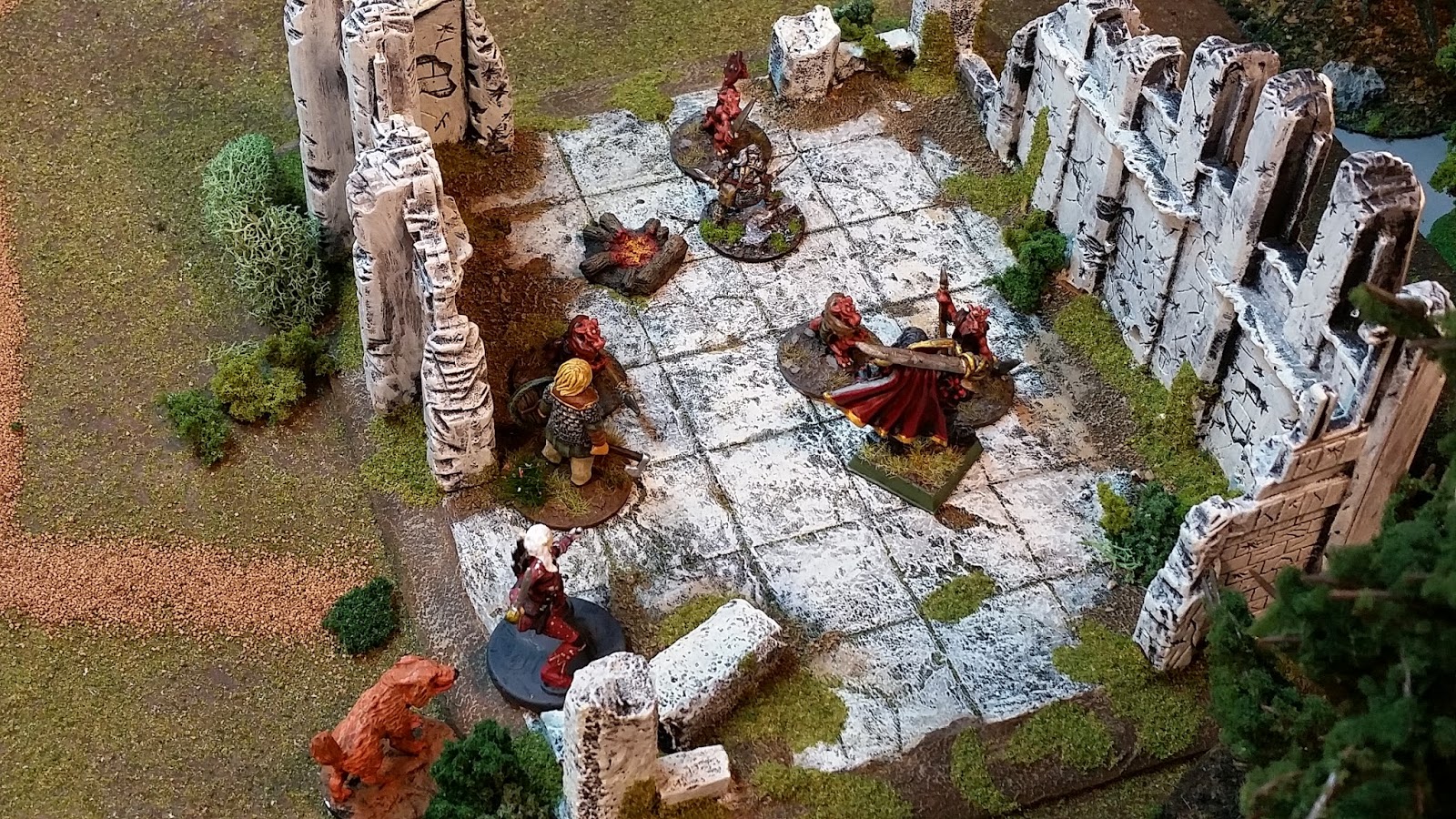 After a brief fight, the Kobolds are killed. 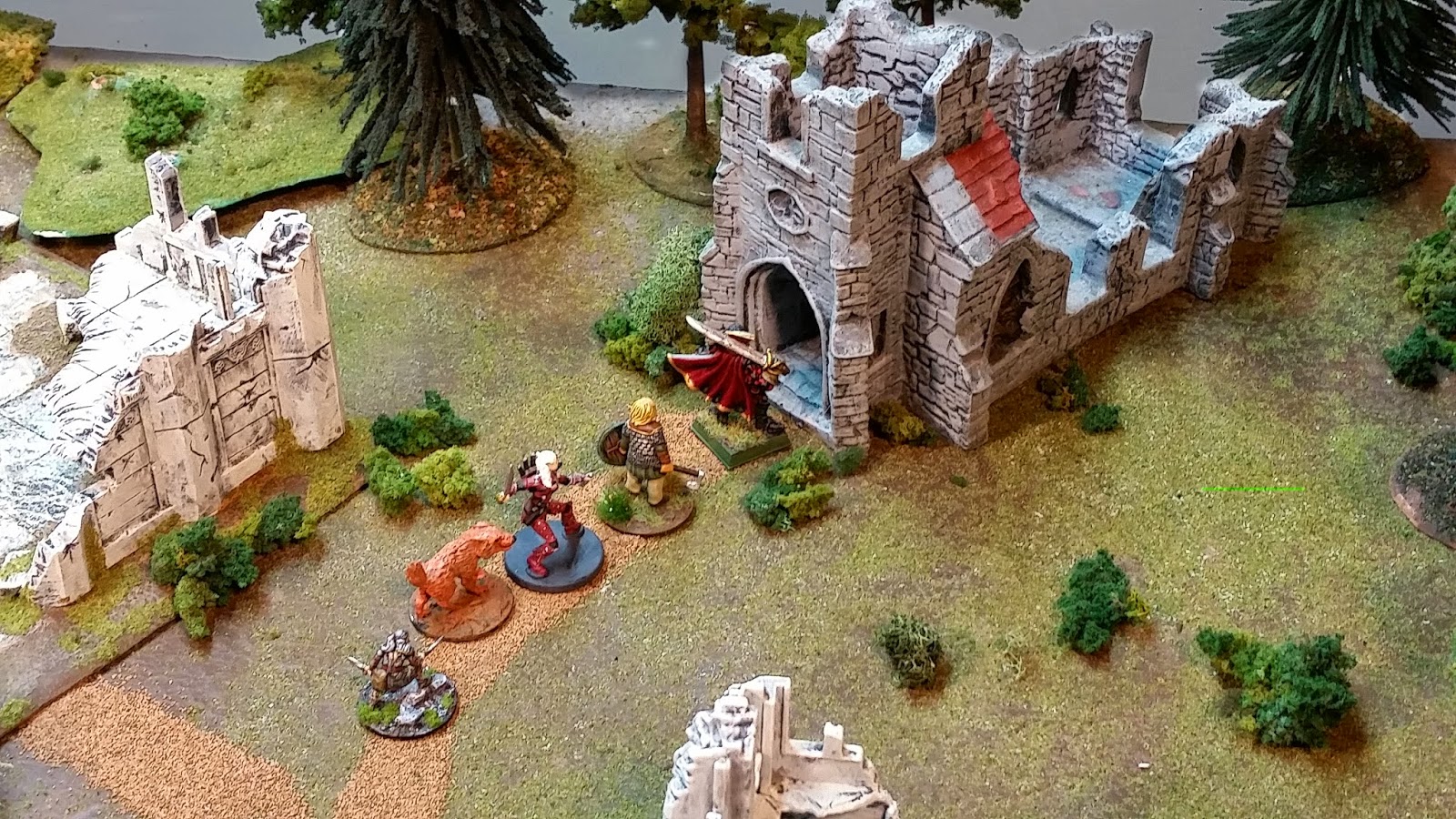 All the buildings are searched. In the last one, they find steps under the Altar. After, Ai'Terria, the elven Rogue scouts out down the stairs the rest of the party goes down into the crypt. 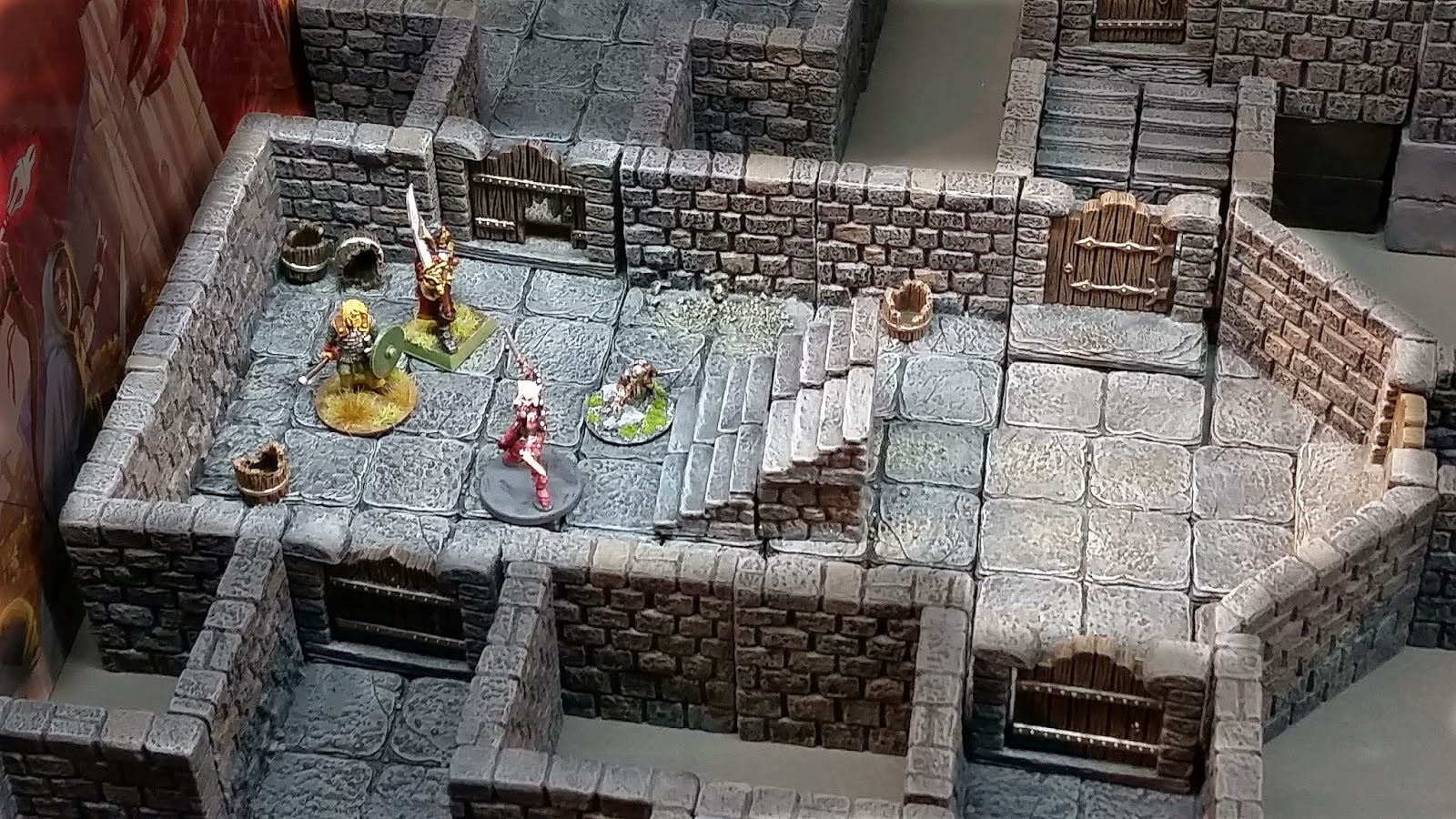 A mostly empty room but with 5 doors. 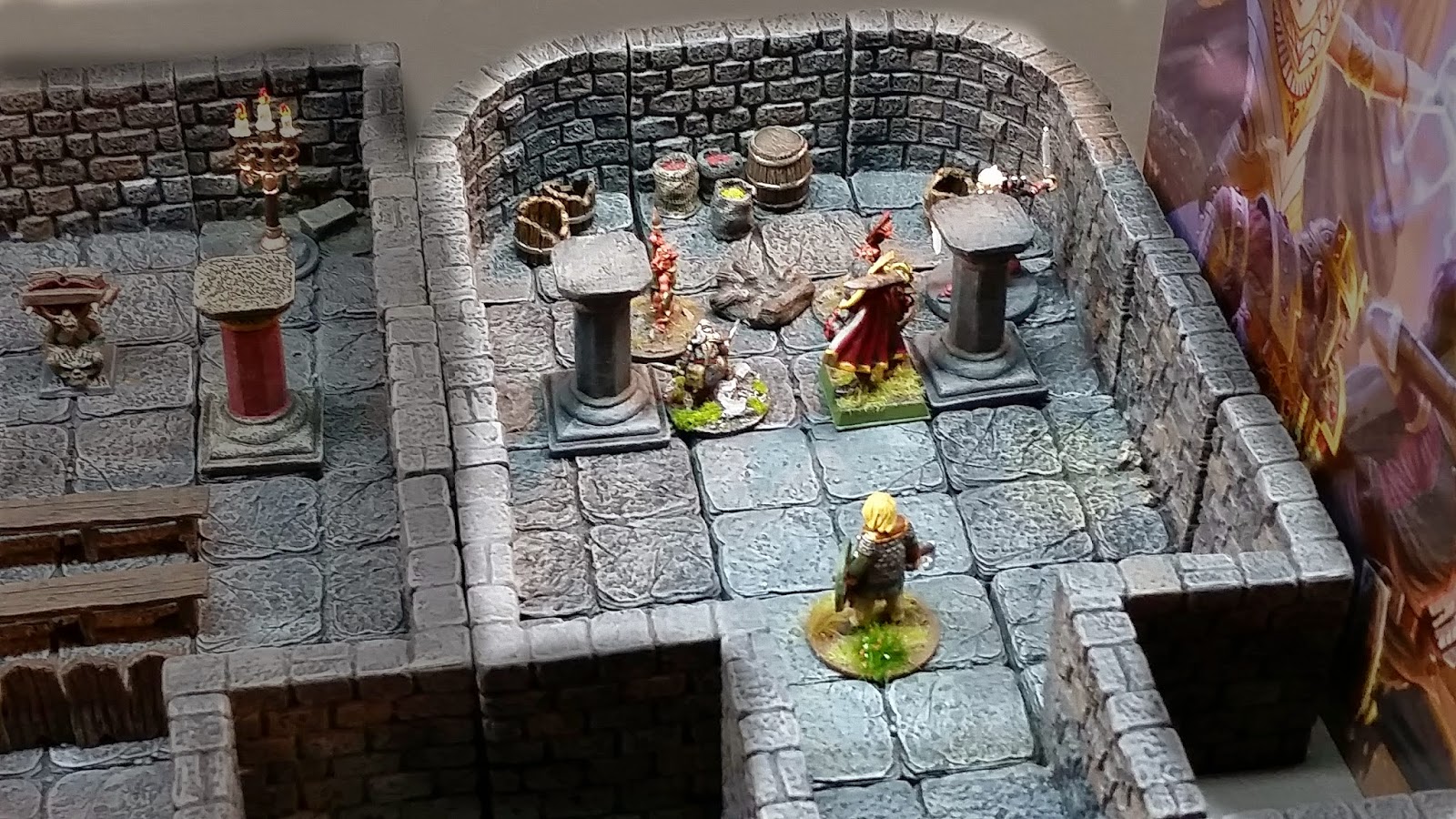 The first room they party explore is a crypt that has been complete looted. Gnawing on bones, they find 2 Kobolds. The Kobolds attack since there is no where to run and die quickly. 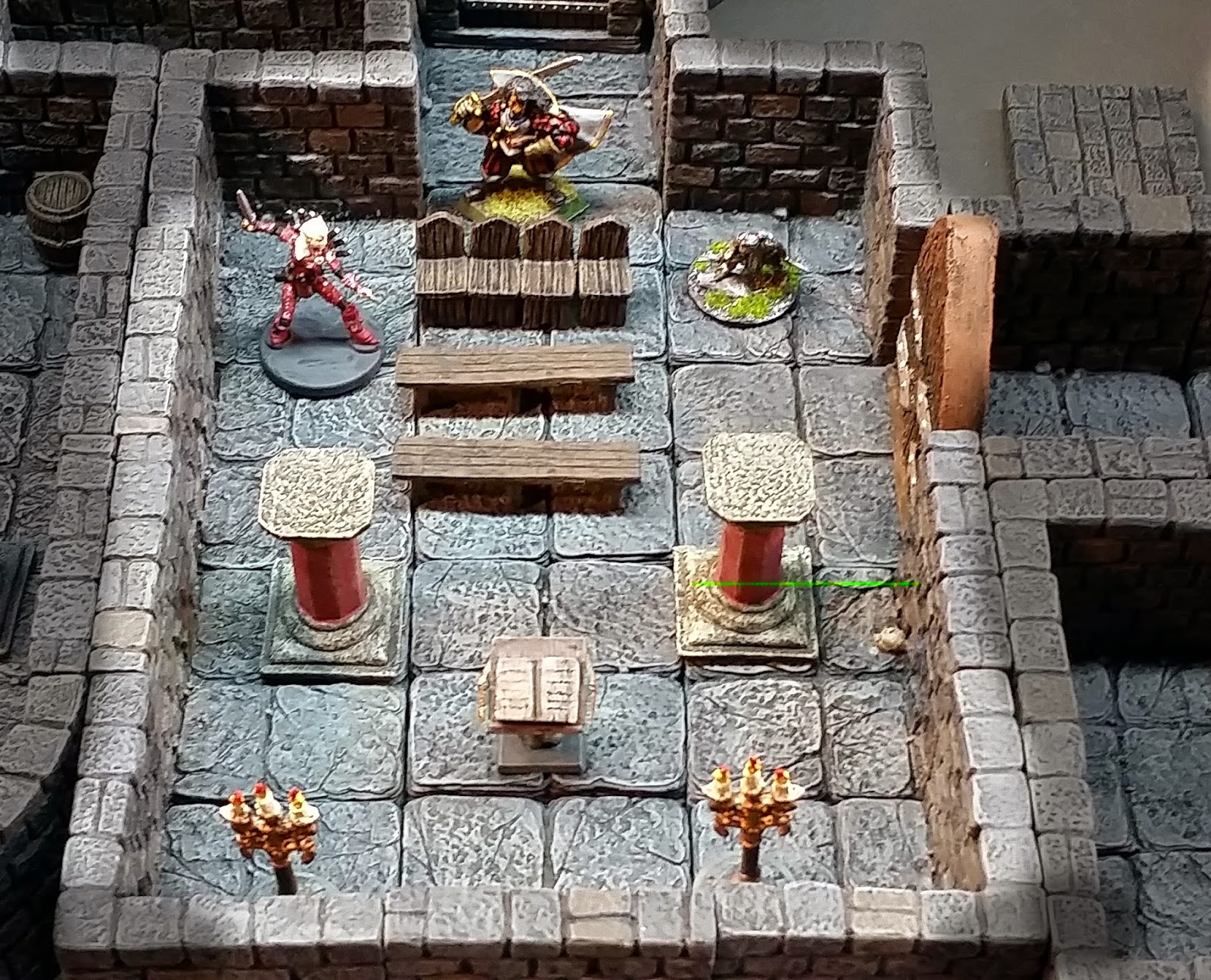 Next they find a small chapel. The large double door seems to be locked and the players choose not to force it open. 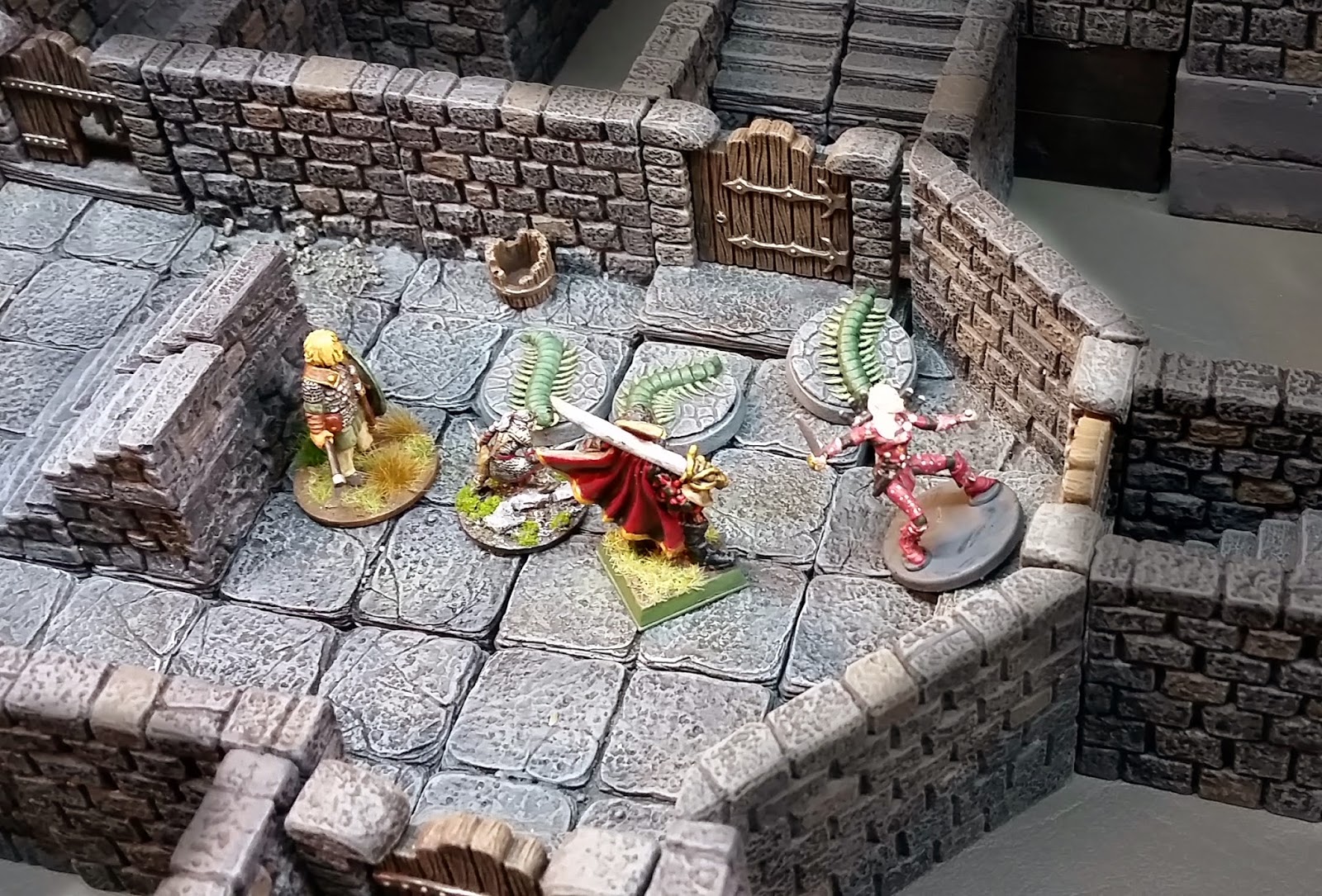 As the players investigate the door at the end of the room they hear a fast clicking noise befind the door to their left. Squeezing under the door comes 3 Giant Centipedes. Dowvoovoo, the Hafling goes down in the first attack, and is poisoned. The 3 others turn and fight. After the initial attack, the fight goes against the centipedes and they are chopped up. The Paladin uses a Lay on Hands to heal and stabilize the Hafling. The party takes a rest here to heal up. 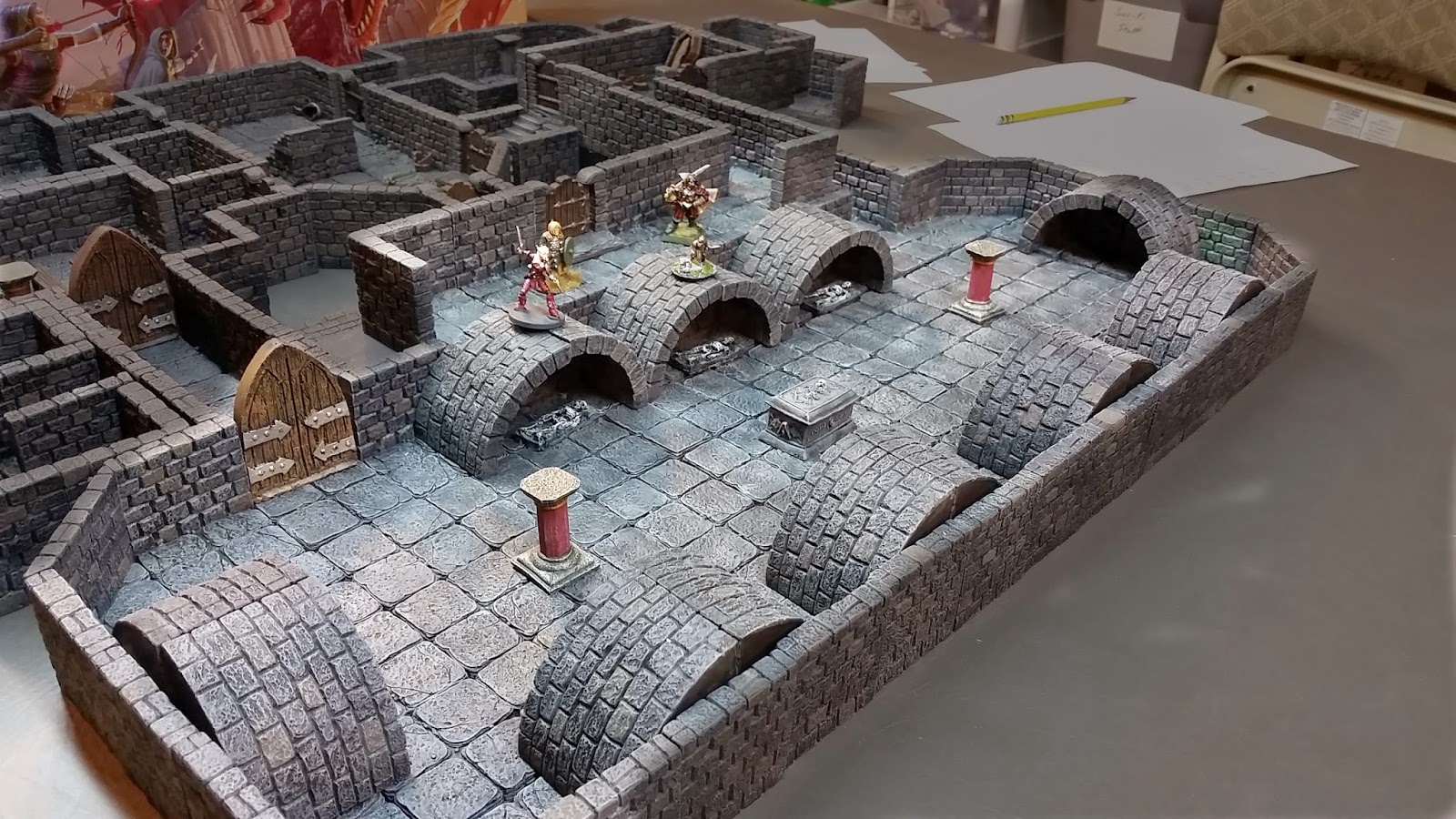 After resting the party once again trys the door at the end of the room. They find a dusty stairway leading up. Through another door and they come out on a balcony above a large crypt. Peering into the darkness they see 9 niches and 1 sarcophagus. 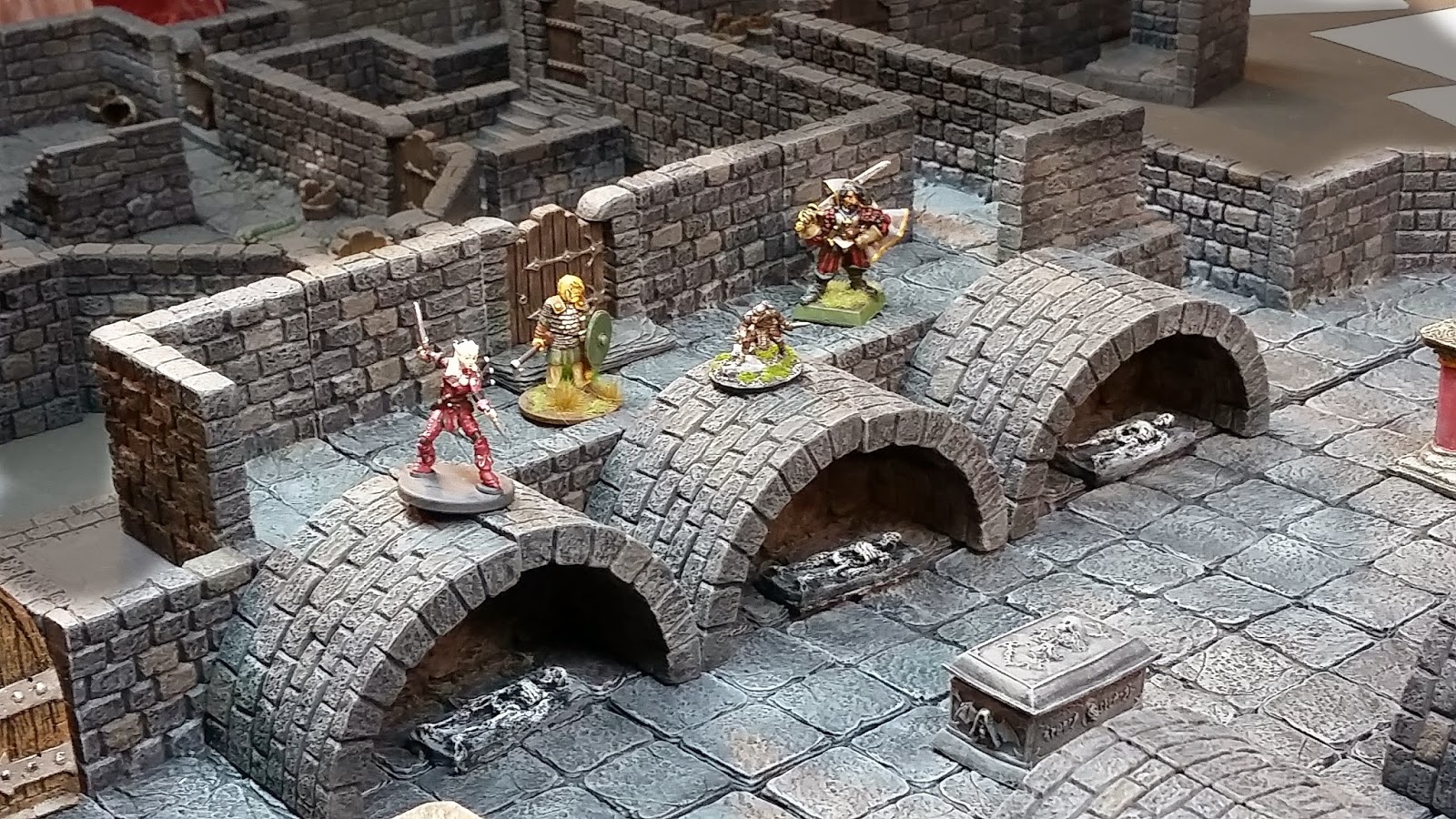 The players pause and look for signs of life or in this case unlife....but its quiet, dead quiet. 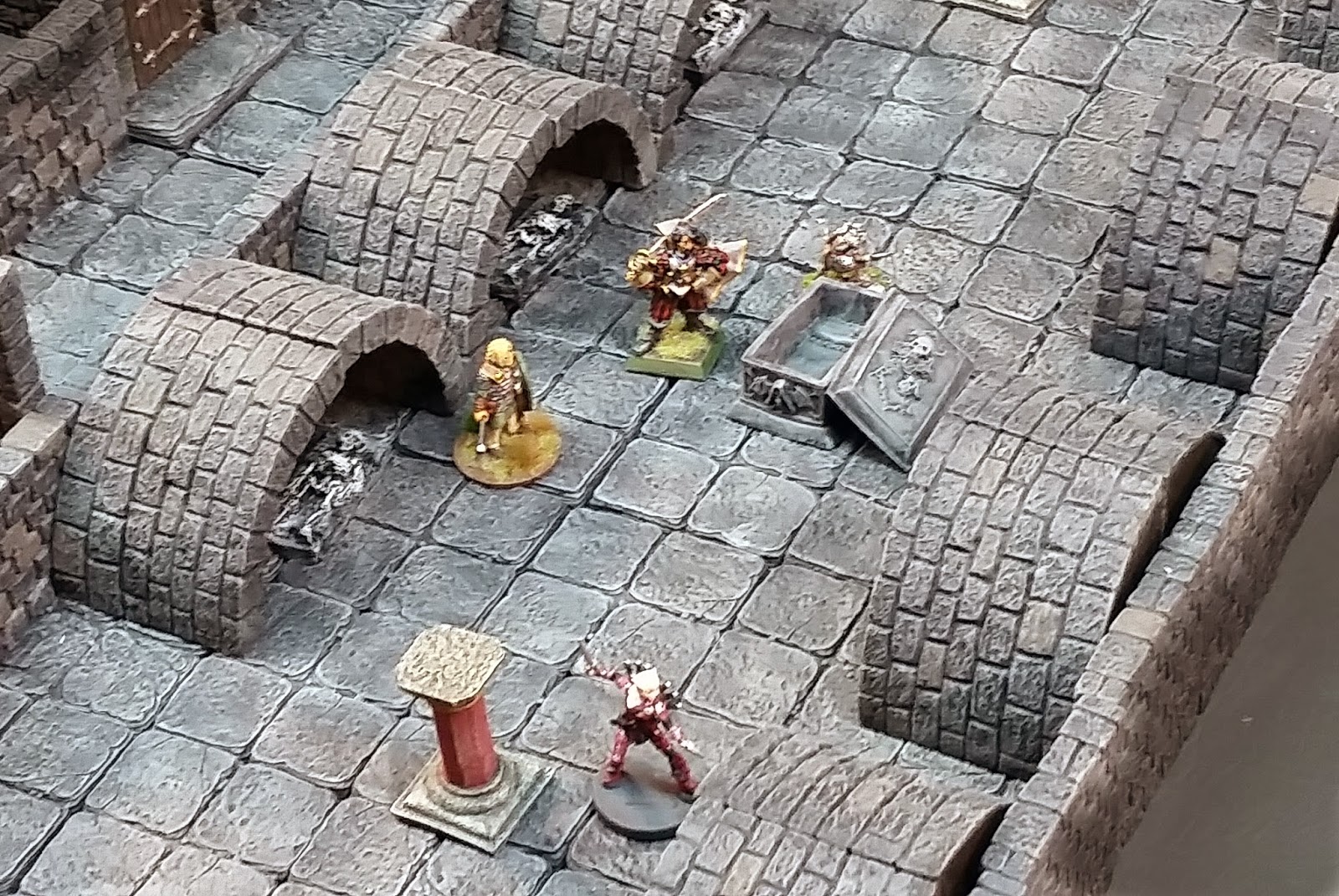 They carefully climb down to the main floor. Some search the piles of bones in the niches. Stor the Paladin and Dowvoovoo investigate the sarcophagus. Stor pushes the lid off. Inside they find a skeleton with a holy symbol clutched in it's hands. Dowvoovoo grabs the symbol... 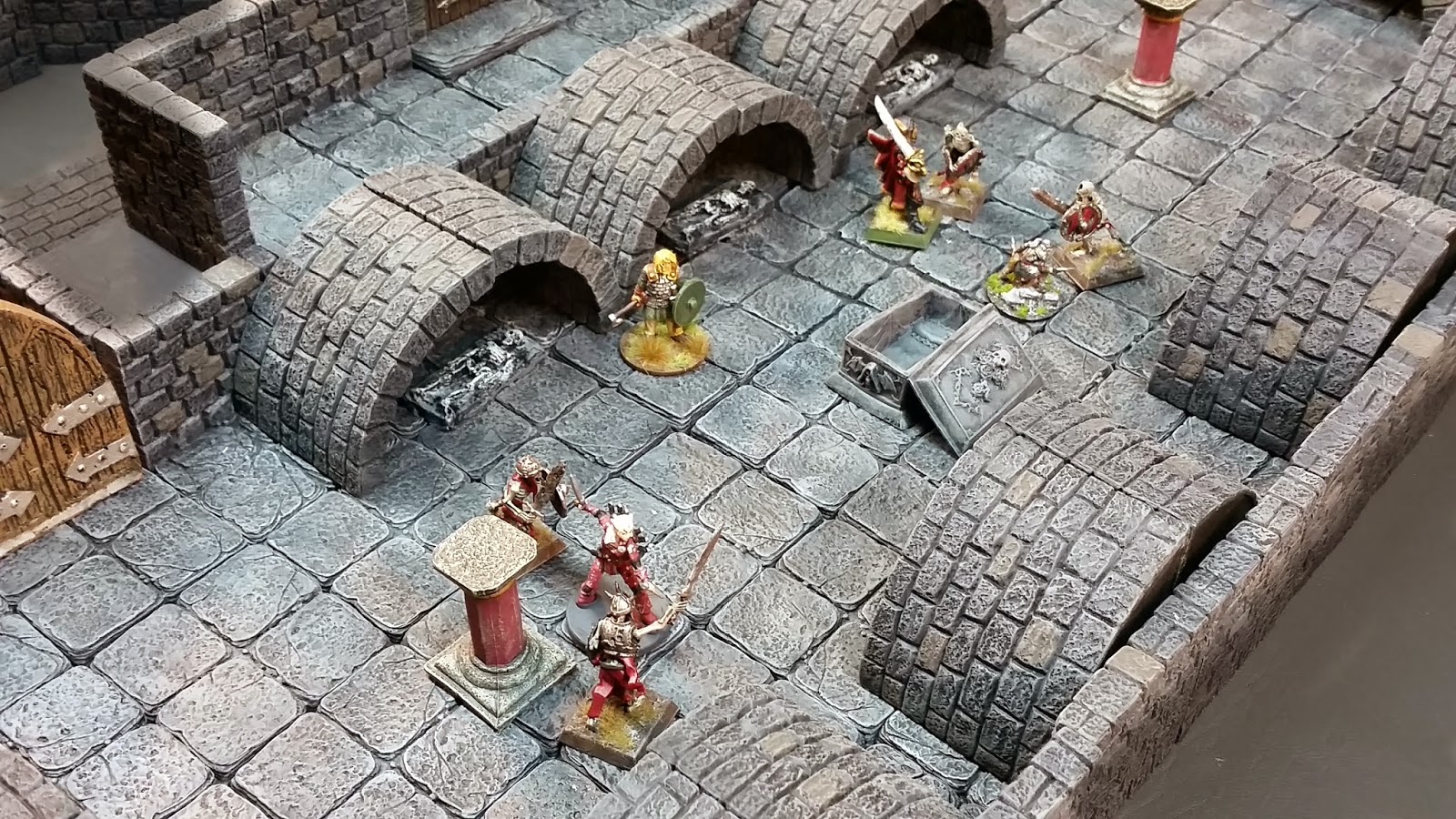 From within the niches the players hear the soft creaking and clattering of bones moving. Four Skeletons appear and attack. 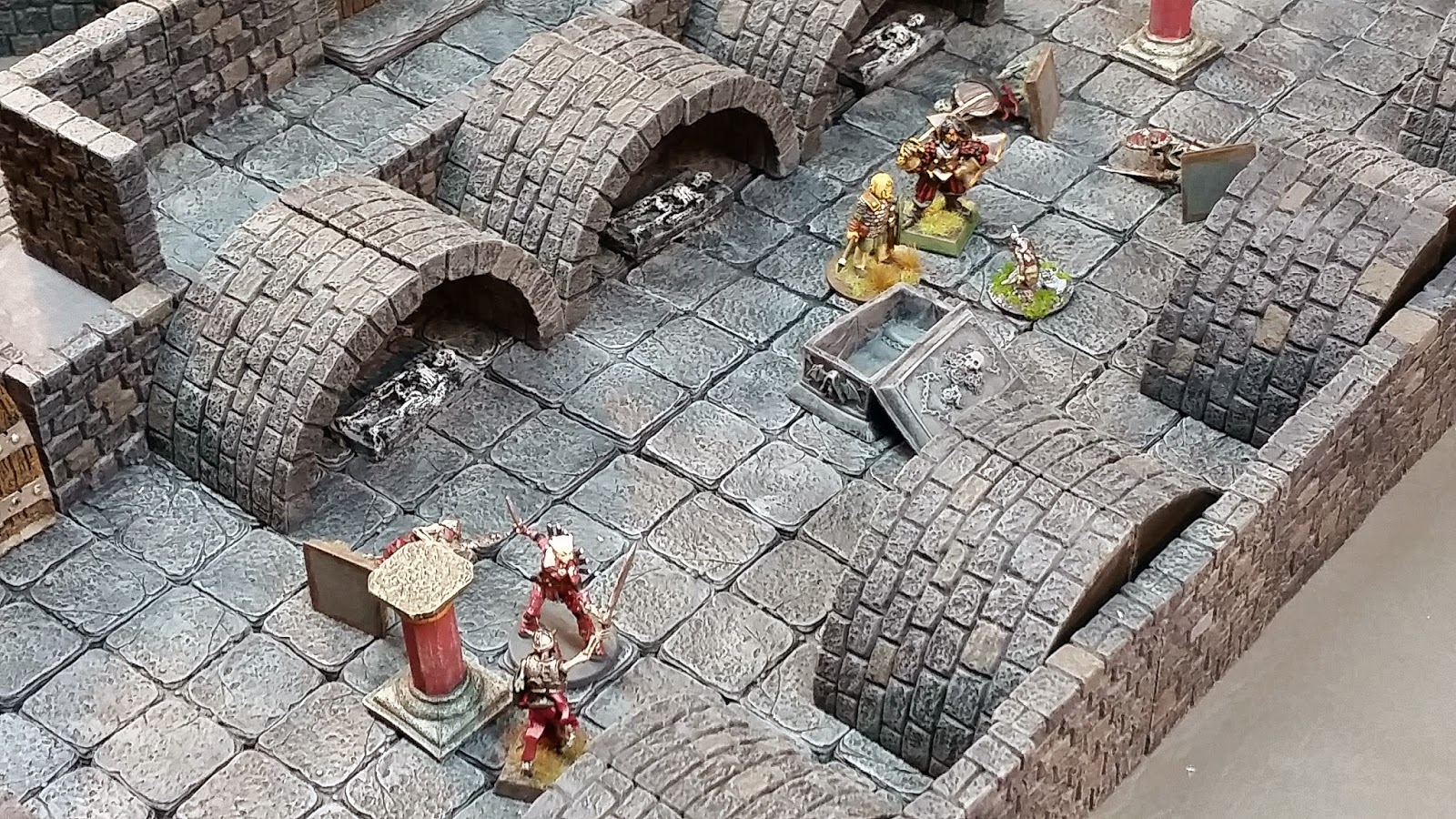 The players loot the rest of the crypt(of course) and head back to town. They collect a reward for the Holy Symbol. The 2 adventures gives them enough xp to level up to 2nd and we call it a night.


We are really having fun with 5e. It is a easy going system that is quick to pick up. I intend to add some complexity to the combat but other than that, very playable.

A few years ago I started listening to Acquisitions Inc Podcasts. A group of gaming insiders playing DnD. It got me interested in playing again. So fast forward a few years...

I've been planning this for a long time. Ever since I got my Dwarven Forge Dungeon Tiles. I tend to over plan sometimes. I painted up special monsters for the game. I modded a game tile piece. I made terrain for an encounter. I got apps for my ipad to help run the game. I wanted to setup speakers to play mood setting music and ambiance background sounds, but ran out of time. I think I put on a kickass game, but in the end it didn't matter.

One thing I liked about listening to the podcasts was just the fun they were having. All the extra shit I did for the game was fun, but in the end the key thing was gaming with friends. I had a blast, and I think my friends did too, and that's the point.

I will continue to over plan and  put on large games, but I won't let that stand in the way of just sitting down and gaming with friends.

Here is our game

The adventure:
Our brave adventurers have been quietly riding out winter in the town of Harlow, when the whole town is called out for an emergency. The Lord of Harlow's son Gunter is missing. He went out hunting and never returned. The local Druids warn of an approaching snow storm, so time is of the essence.

The players are formed up into a search party and sent out with the rest of the militia and townsfolk in different directions. 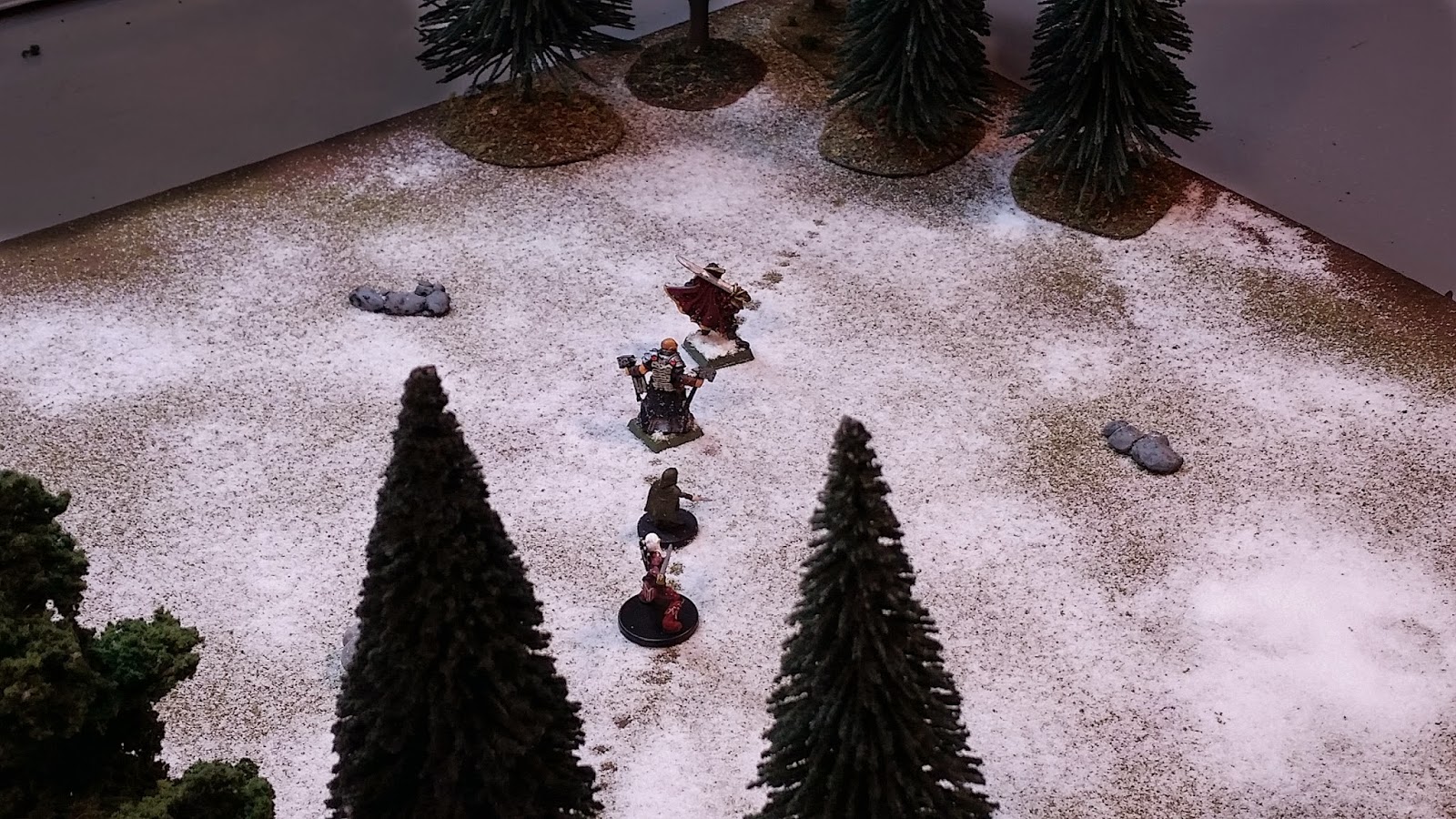 As the players push out into the woods where Gunter might be hunting they come across a single set of tracks heading into a secluded valley. 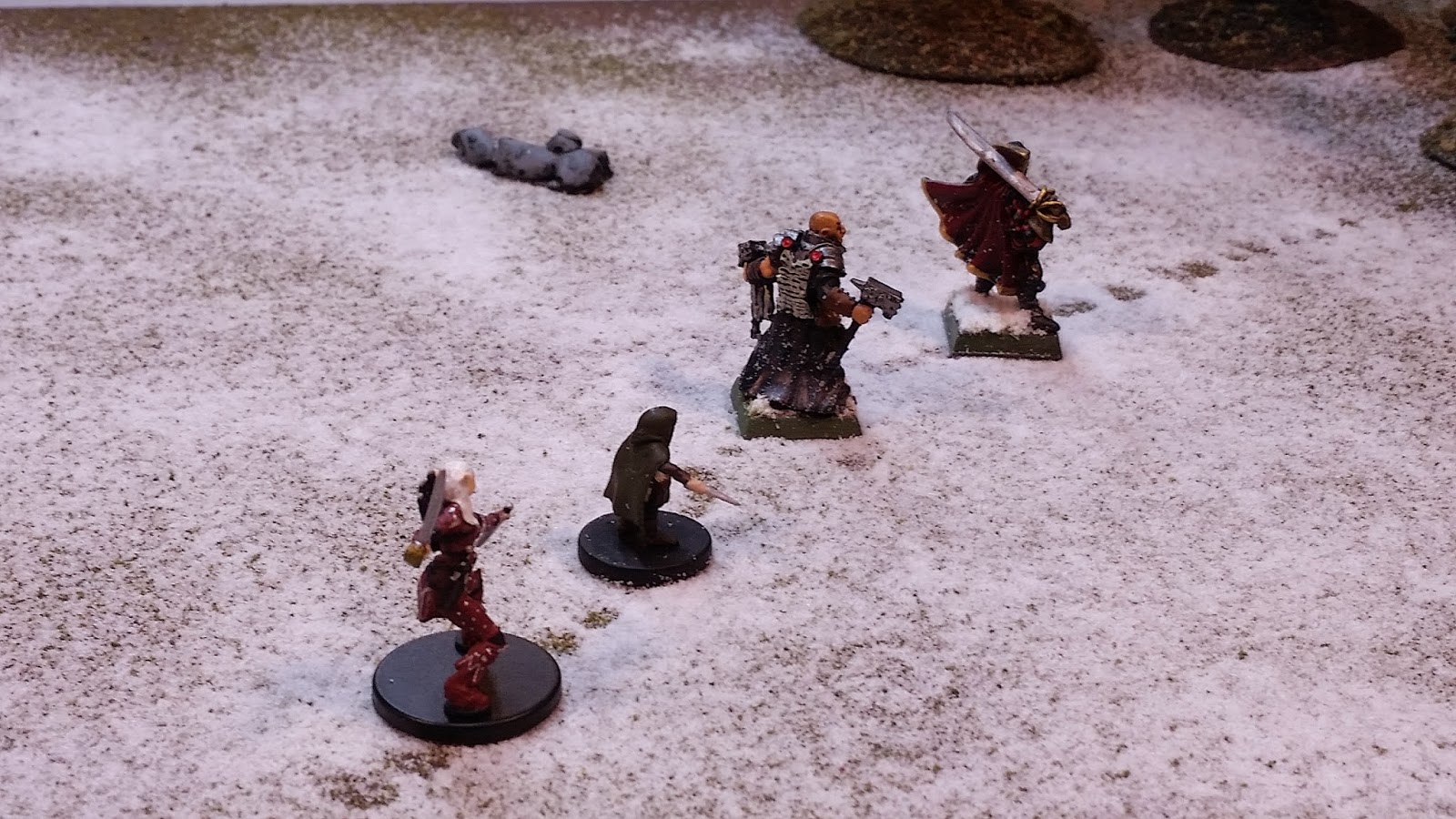 Sometimes the drifting snow obliterates the tracks, but the players keep on the track(Survival check). 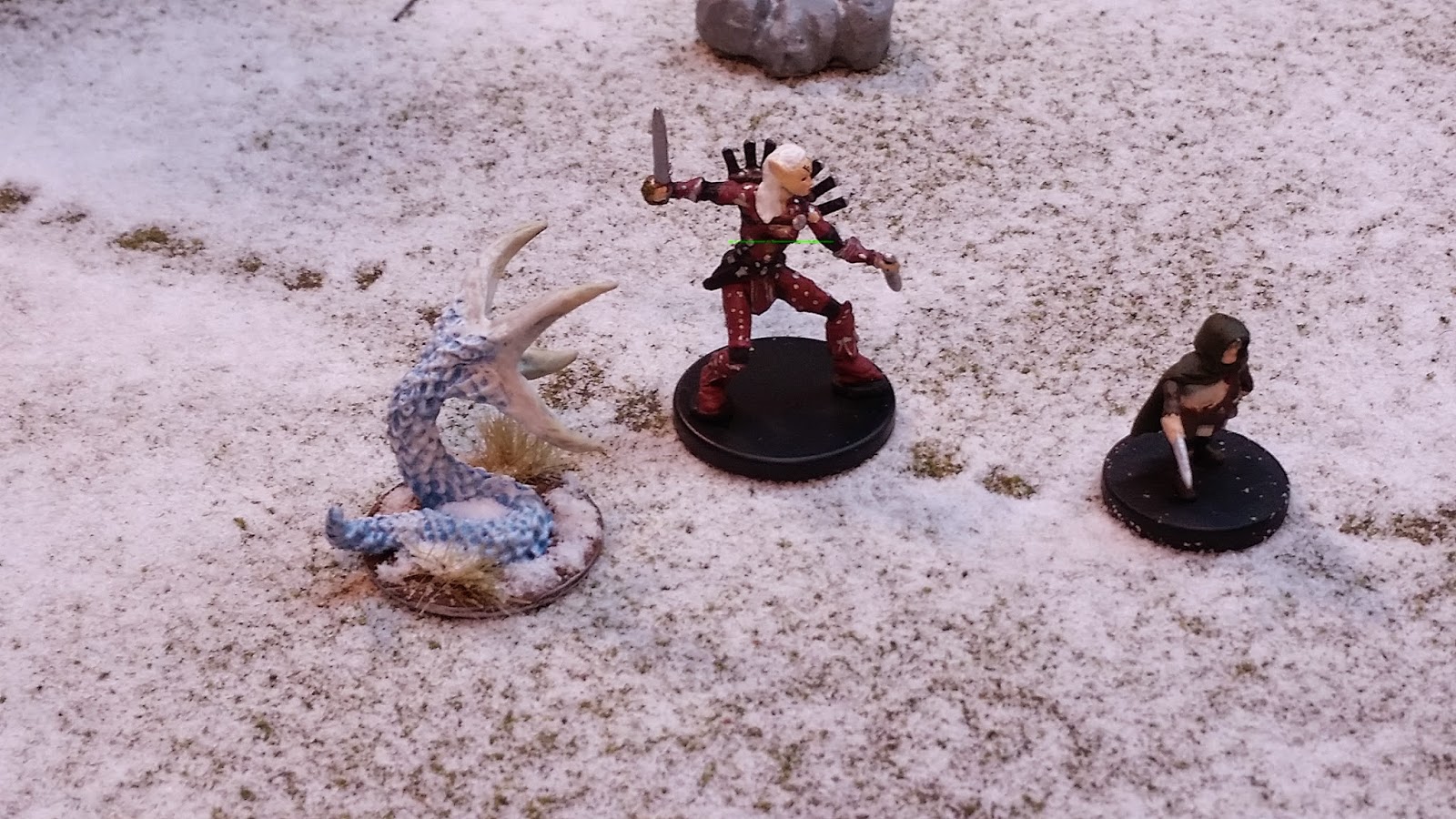 Crossing a clearing of deep snow, Perception check reveals two "Gopher trails" of pushed up snow. They seem to follow the foot prints in the snow. The 2nd more Important Perception check missed the trails circling back and moving in on them.  Under the snow something grabs Ai'Terria and pulls her under the snow. 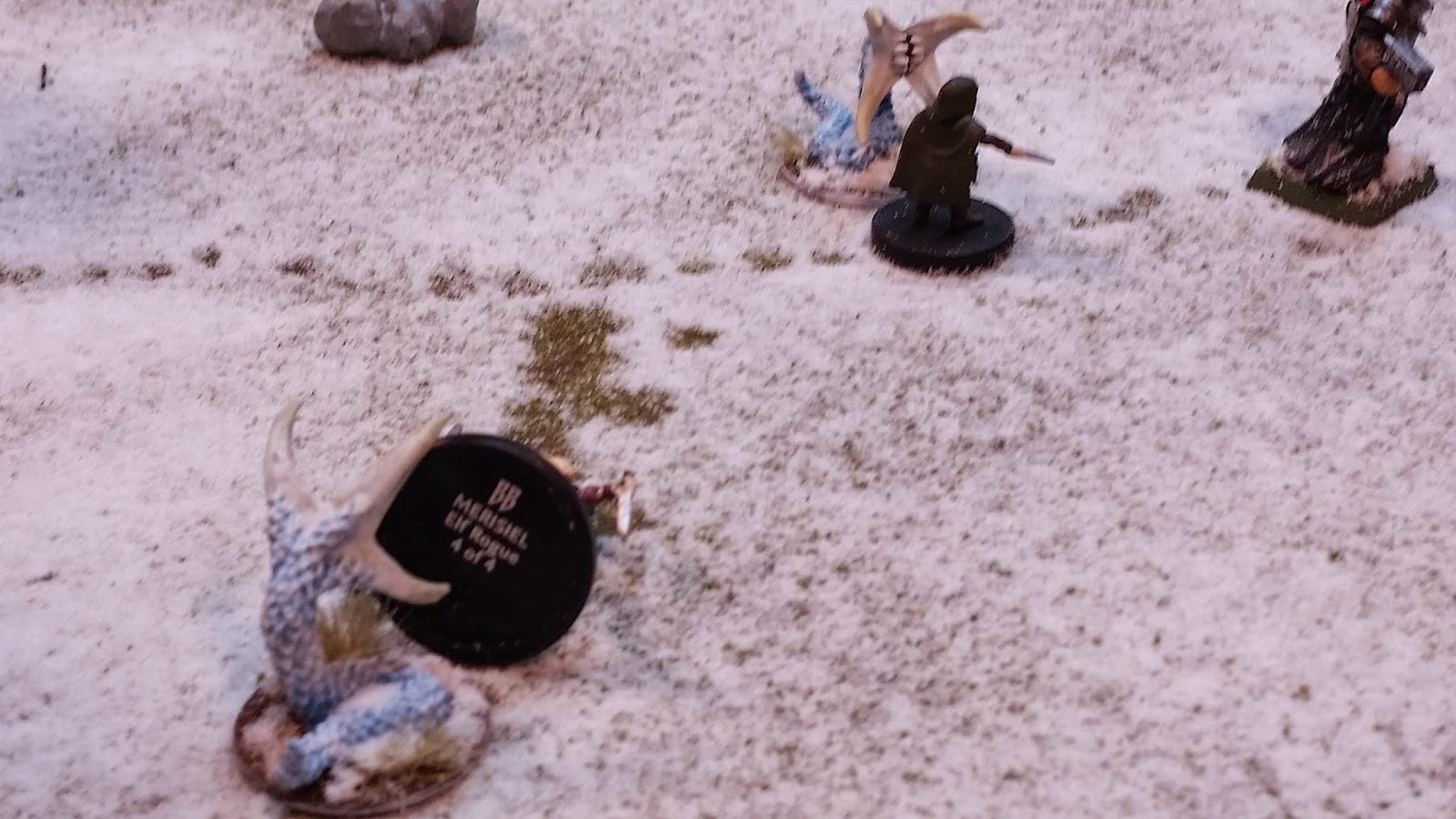 . Then something pulls at Dowvoovoo's leg and he is pulled under the snow as well. 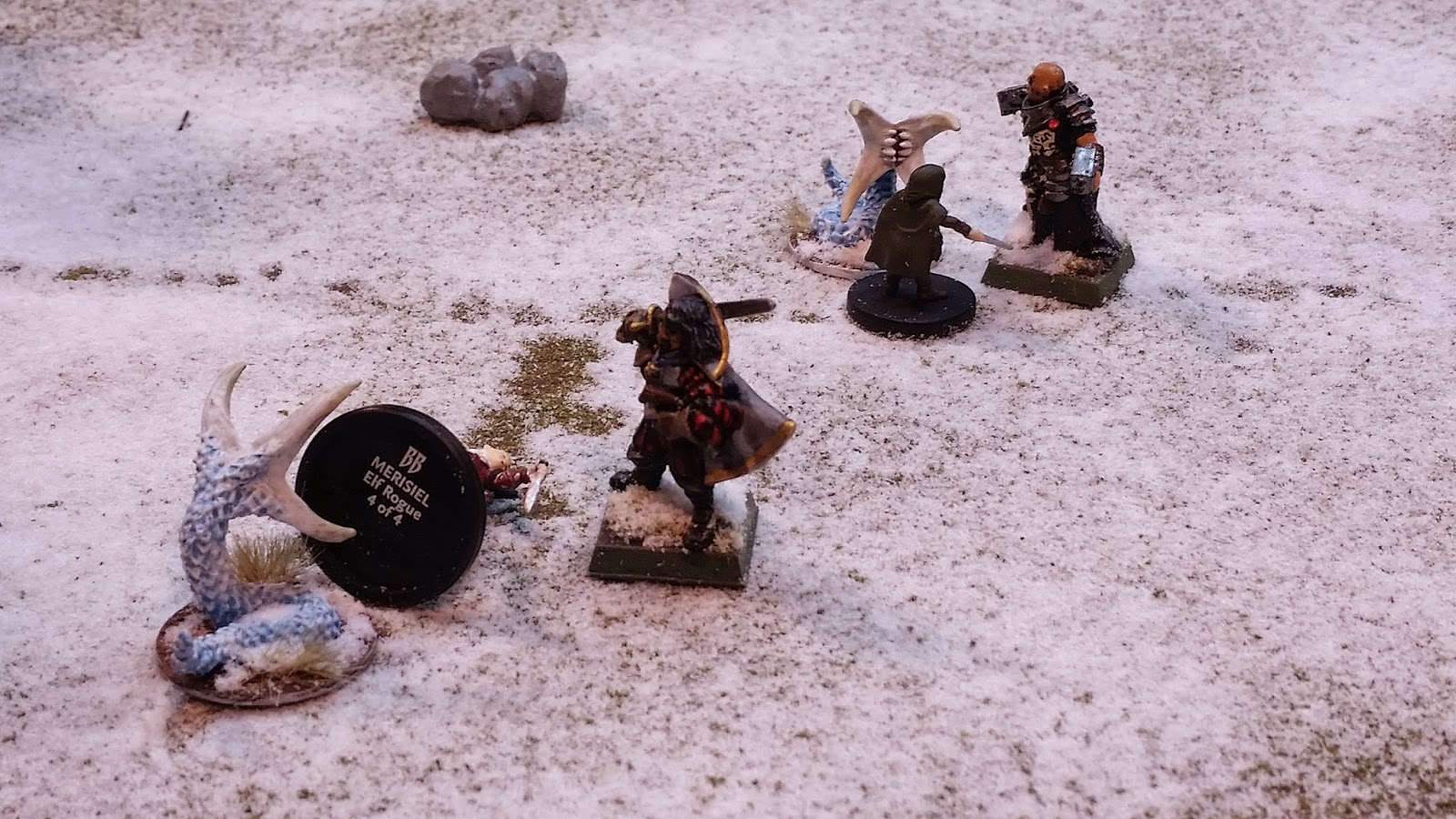 After being surprised by the Snow Worms, the party responds quickly and kills them. 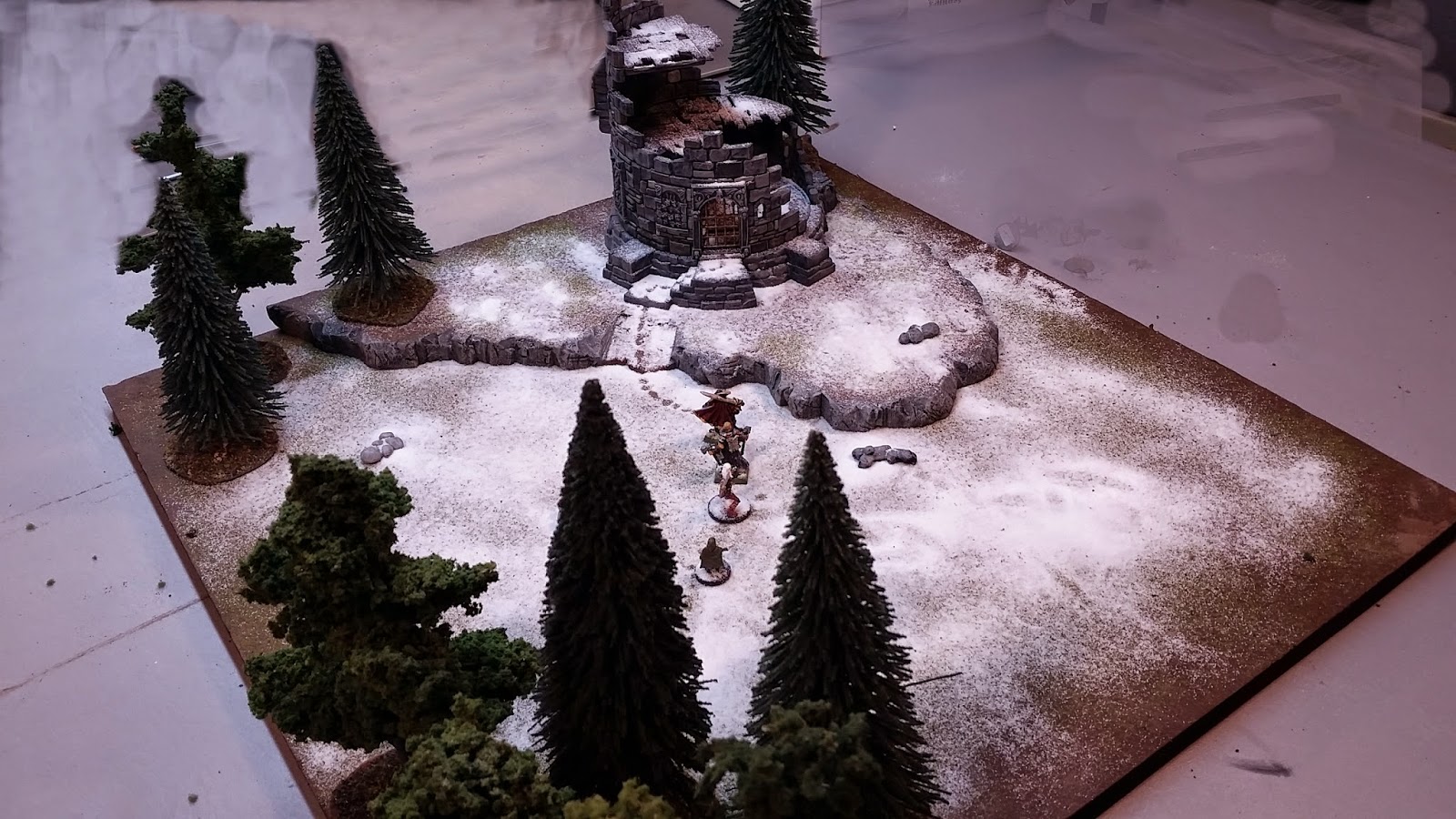 Following the tracks the players eventually find a crumbling tower. 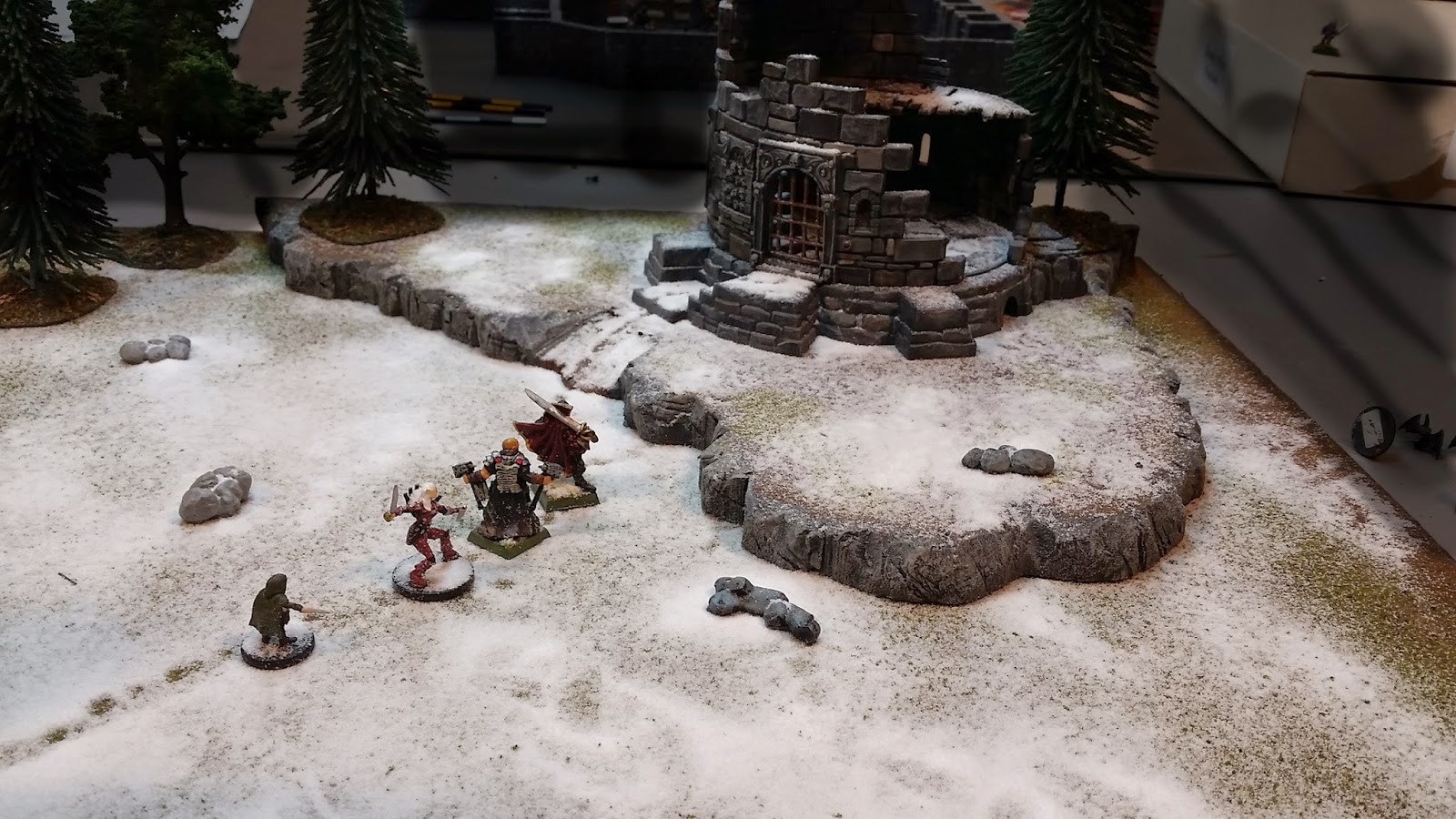 Carefully making their way across the snow, they approach the tower. 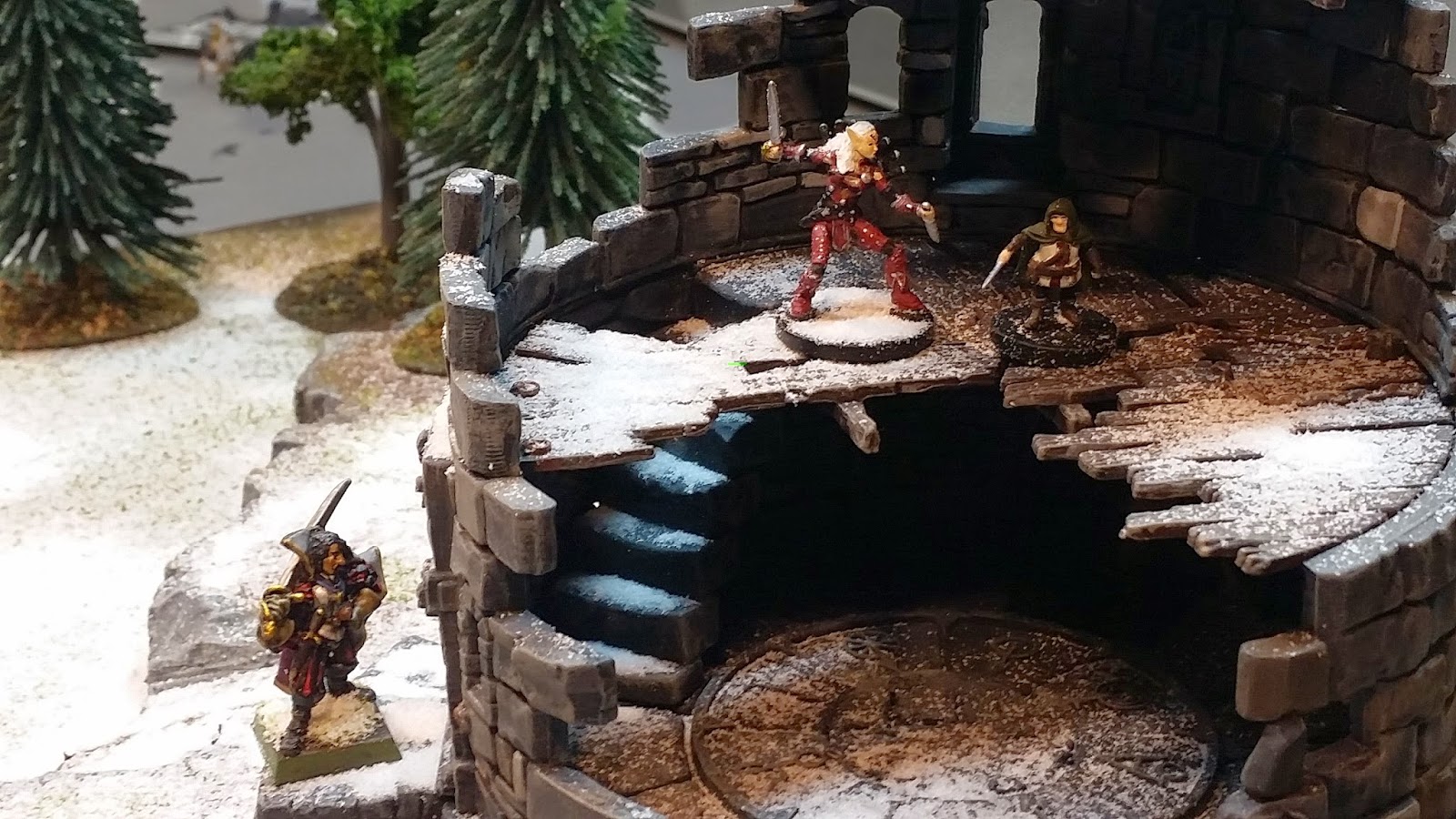 The tracks lead into the tower and up the stairs. The players explore the tower. 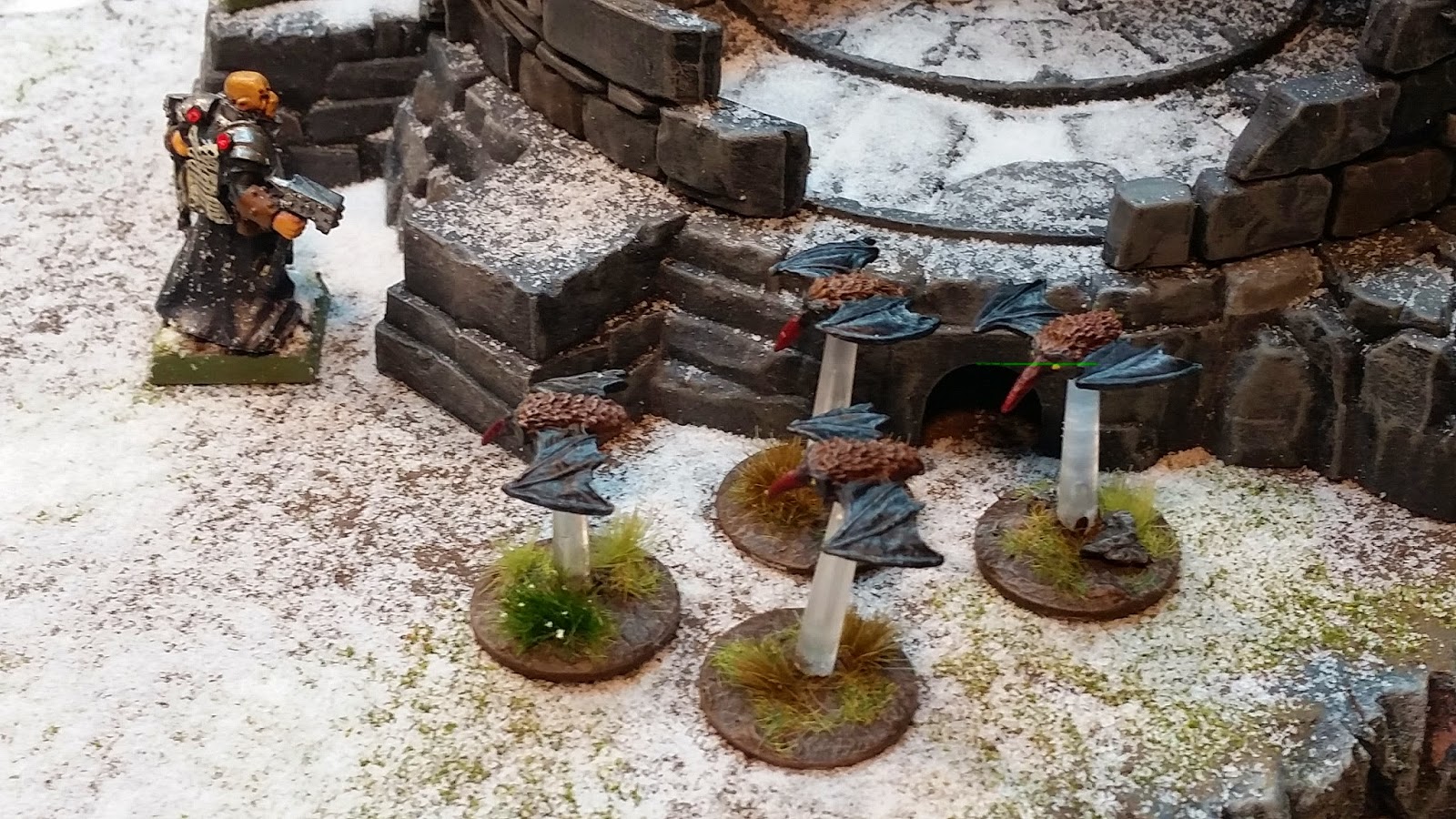 While exploring the players disturb a nest of Stirges. The blood sucking beasts attack! 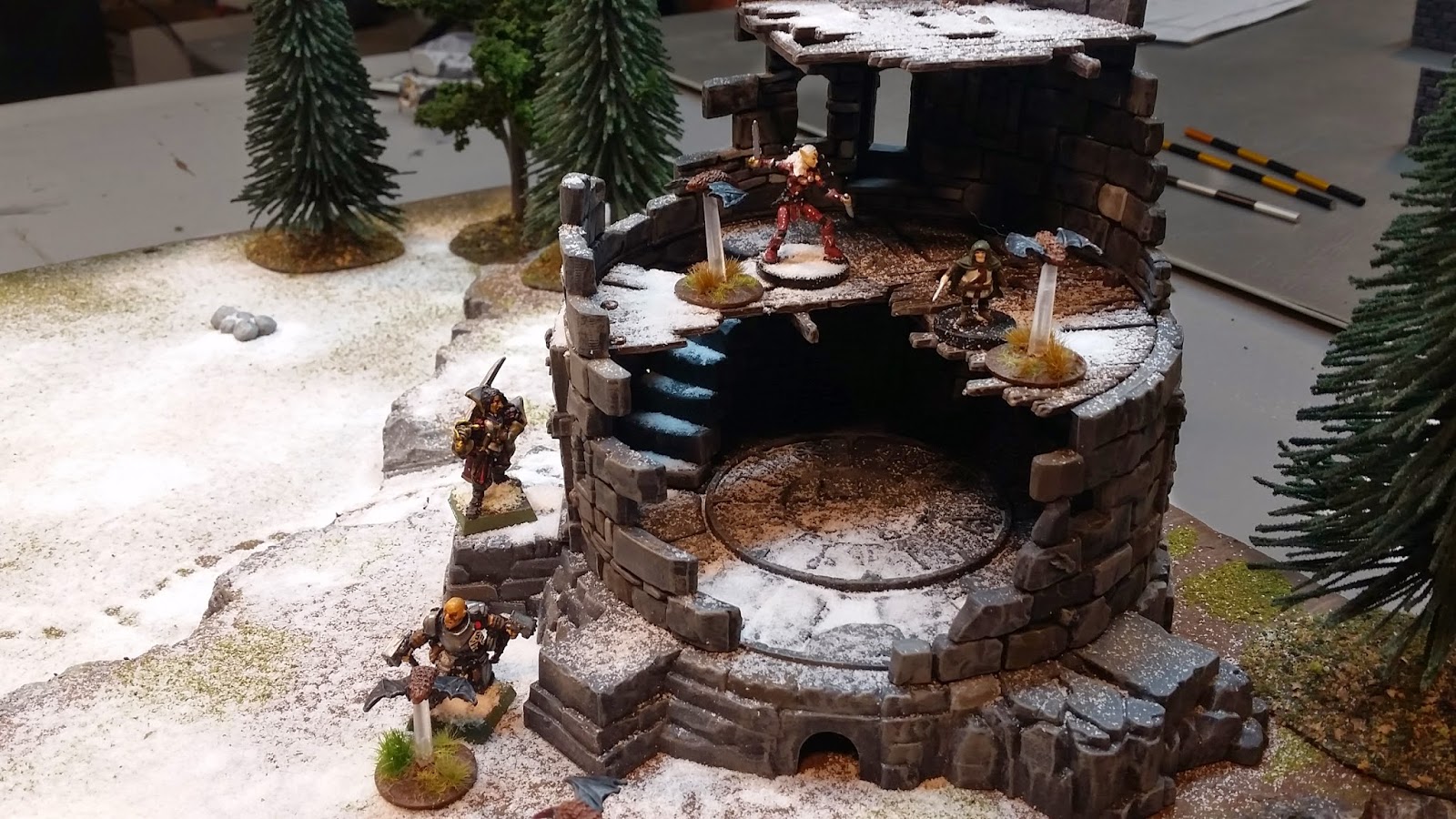 Again the party manages to kill off the attacking monsters. Some of the players have taken some damage in the 2 encounters. But they press on. From the evidence the players find in the tower, it seems Gunter fell from the top floor through a trapdoor and into the basement. 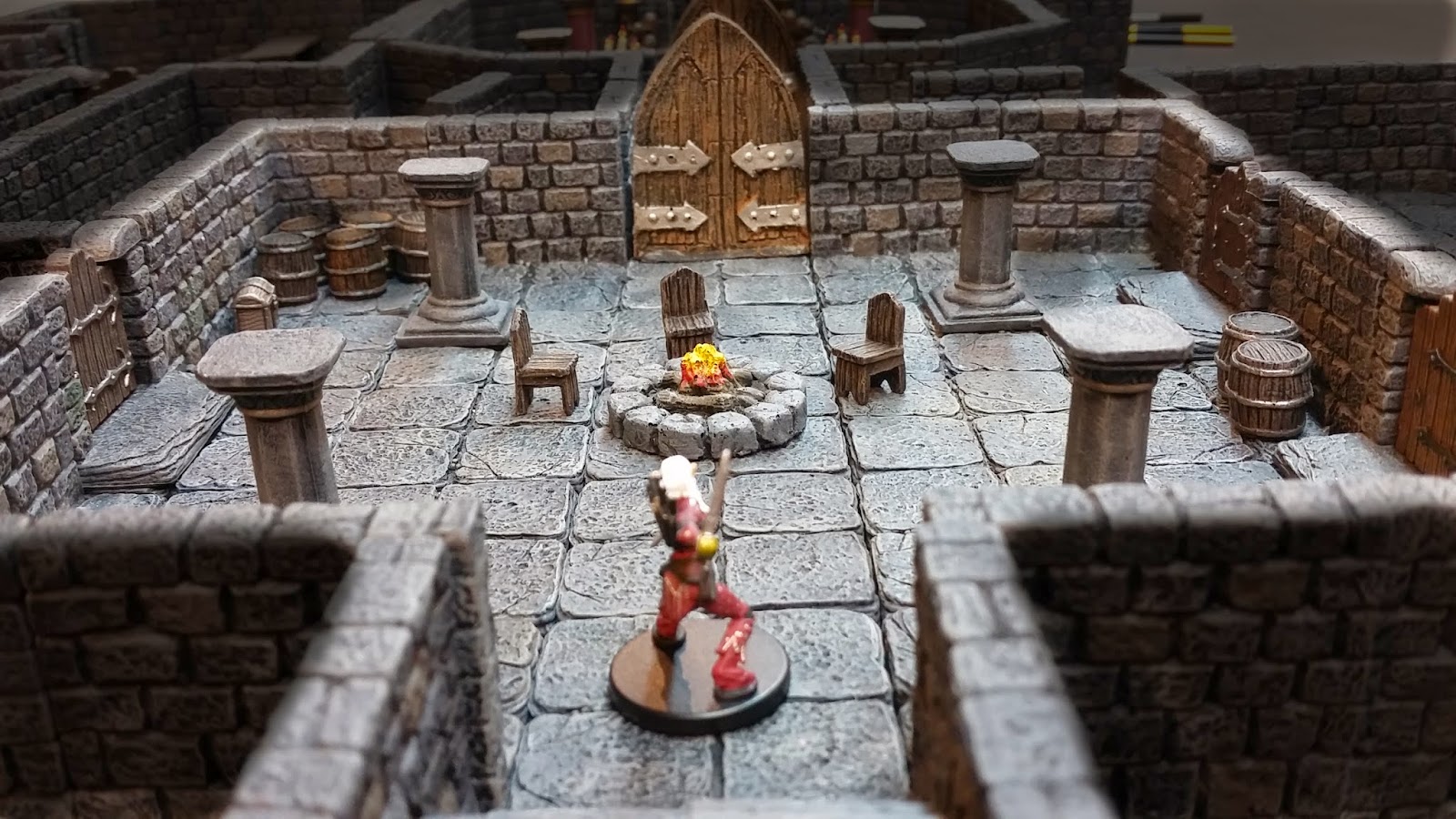 The Elven rogue goes down to investigate since she can see in the dark. She finds a large room with a lit fire. Some blood on the stairs but no one in site. 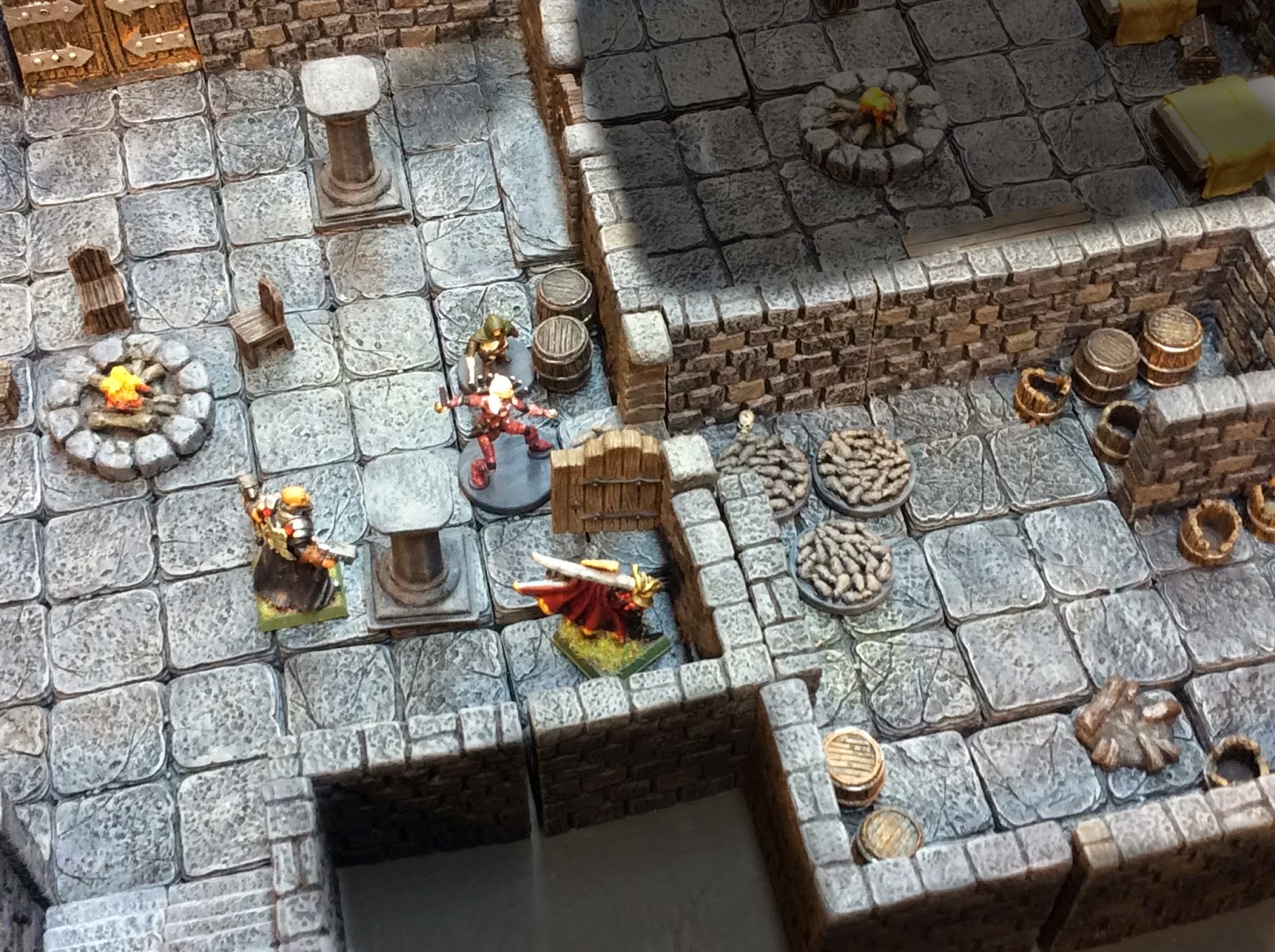 The rest of the party comes down and investigates. After hearing some noise they open one of the doors into a storage room. 1000's of rats coming pouring out. The party manages to kill 3 rat swarms but injuries are starting to mount. The cleric Gavrillo uses his last spell to heal Ai'Terria. Investigating the storage room they find a pile of clothes that Gunter was last seen wearing and some non hunting type gear. Also they find a map that leads from the town to the crumbling tower. Seems he came looking for this place and was not "out hunting" 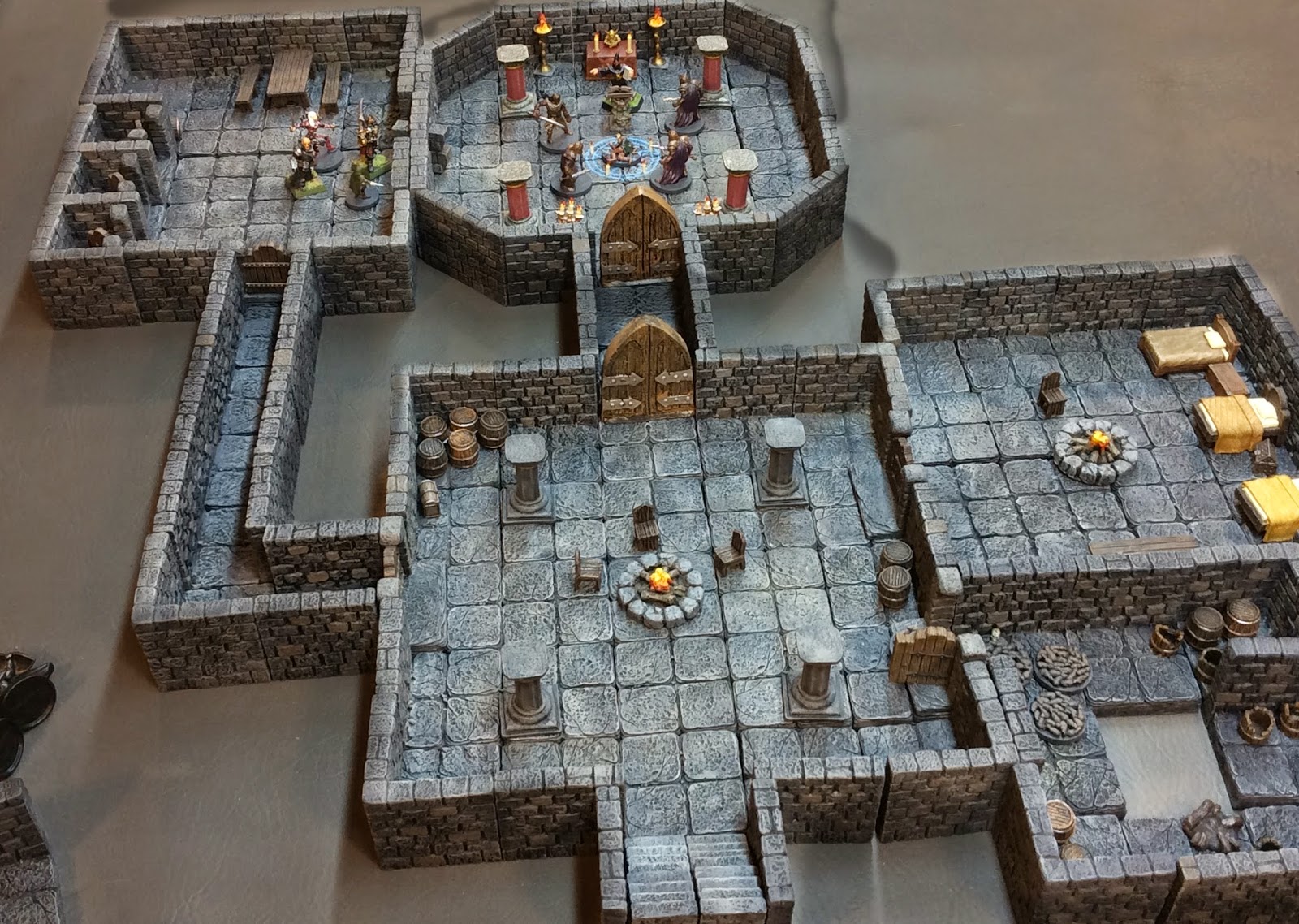 The brave adventurers could not get through the Large double doors so they explored a side passage. At the end of the passage they find prison cells.  I had another encounter planned here, but it was late so I just ignored it. While searching the prison area Gavrillo hears muffled chanting through the wall. More searching reveals a secret door. The party gathers around the door and prepares to open it. 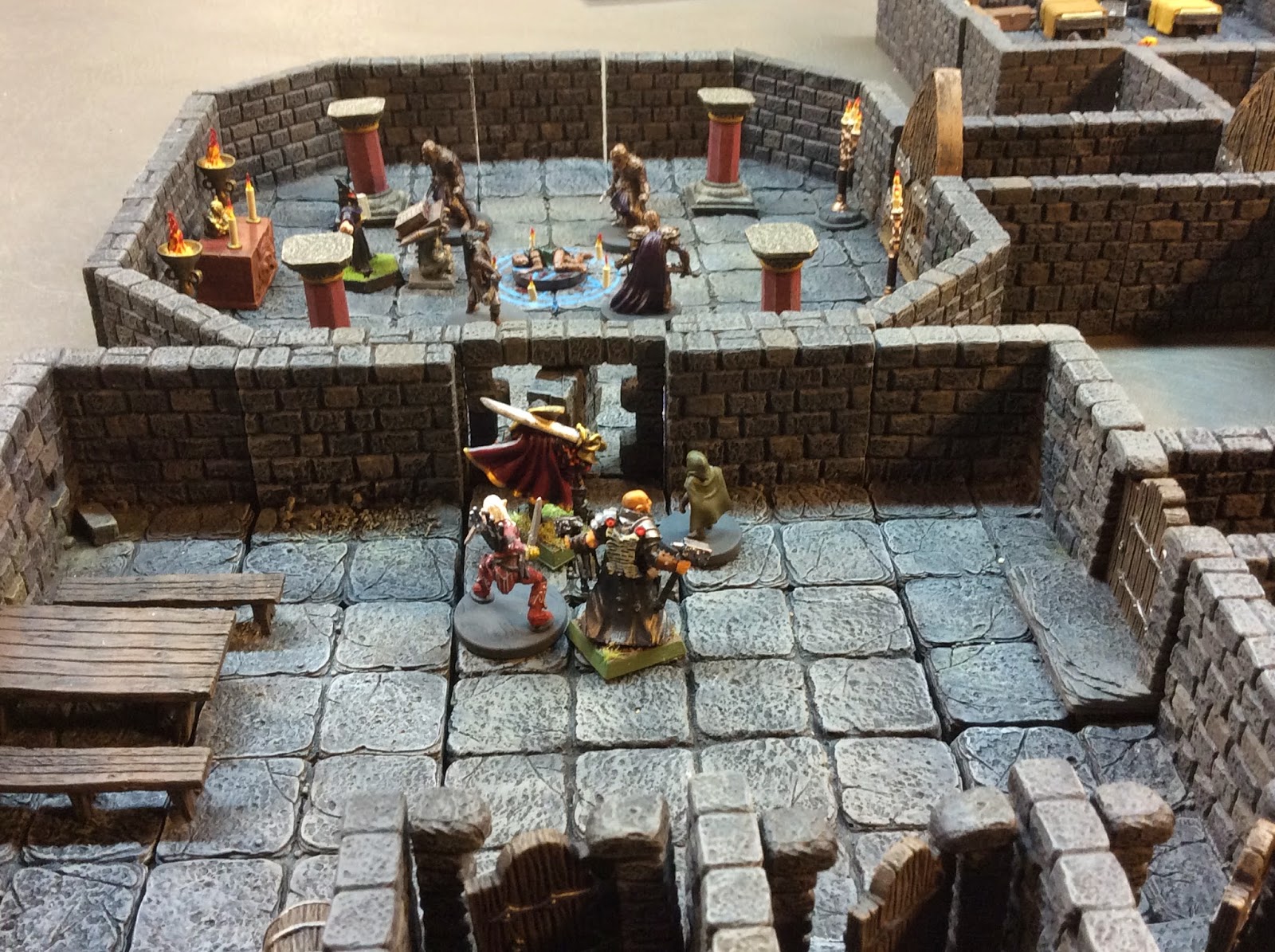 Inside they see some sort of ceremony going on. 5 robed Cultists and Gunter lying in the middle of a magic circle. Four of the cultists are surprised but the leader is not. His immediate response is to cast Darkness at the secret door, blocking all visibility. Then using his movement, heads for a secret exit(unknow to the players) Dowvoovoo  charges the  closest cultist he saw as the lights went out(Advantage for surprise/Disadvantage for Darkness) He has two attacks and rolls two 20's! He eviscerated the cultist. 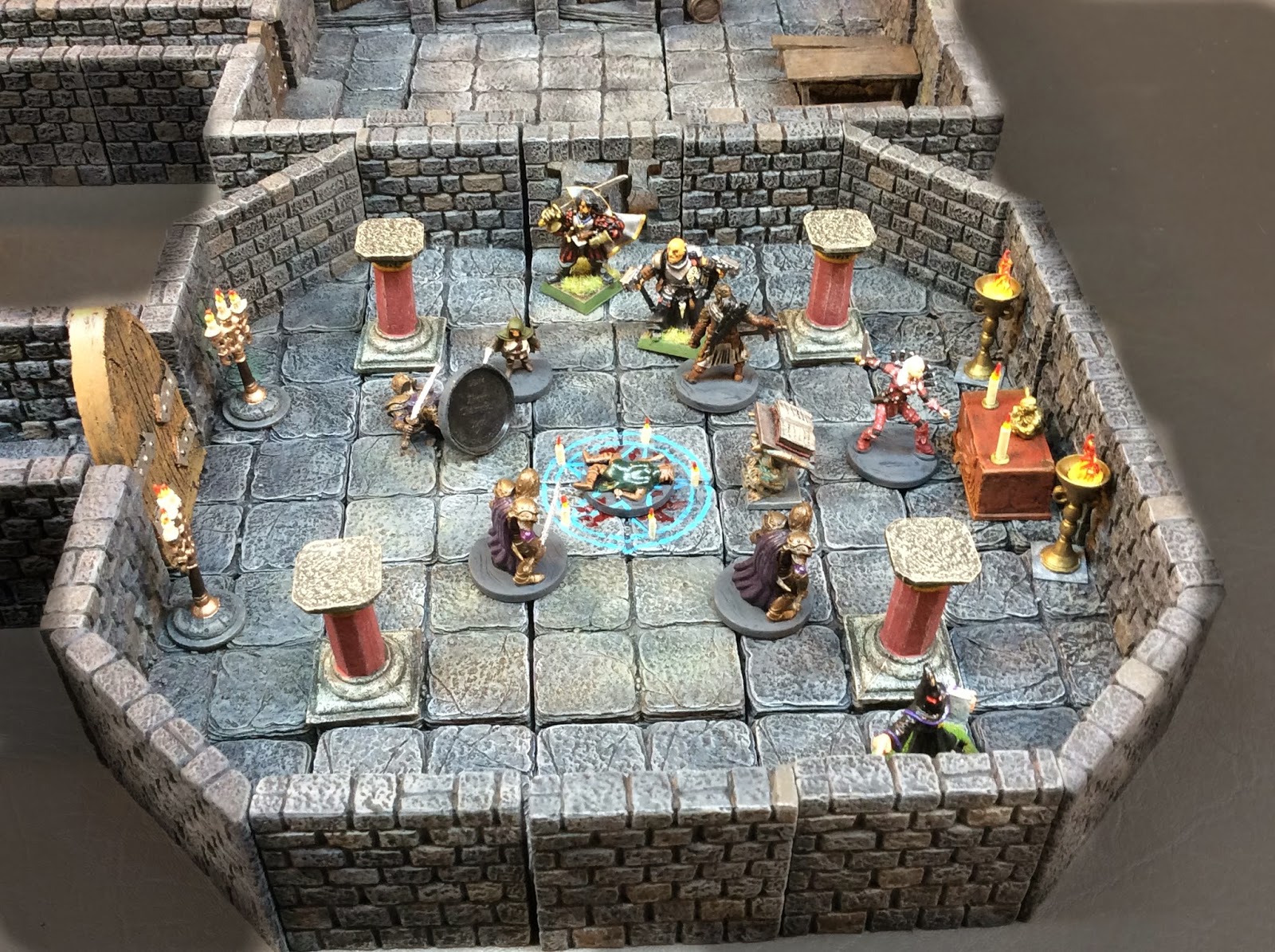 The rest of the group push through the darkness and engage the other cultists. Gavrillo hits the leader with Sacred Flame, just as he slips through a secret door. The other party members dispatch the remaining 3 cultists. 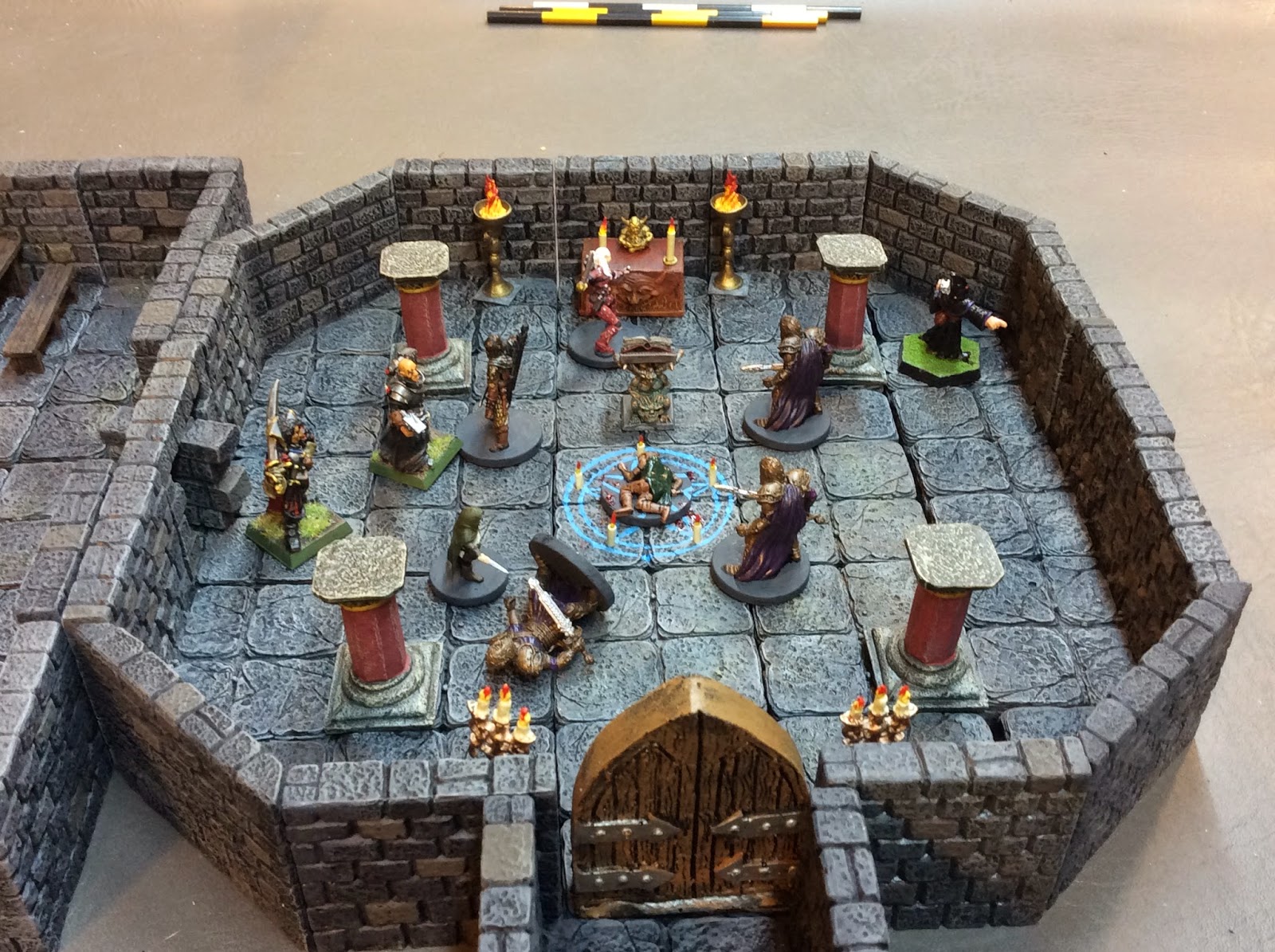 The Rogue snatches up a golden demon statue and hurls it out the magic circle. There is a bright flash and the circle is broken. Later the Rogue, Ai'Terria, slips the half melted demon statue into her pack without anyone noticing. 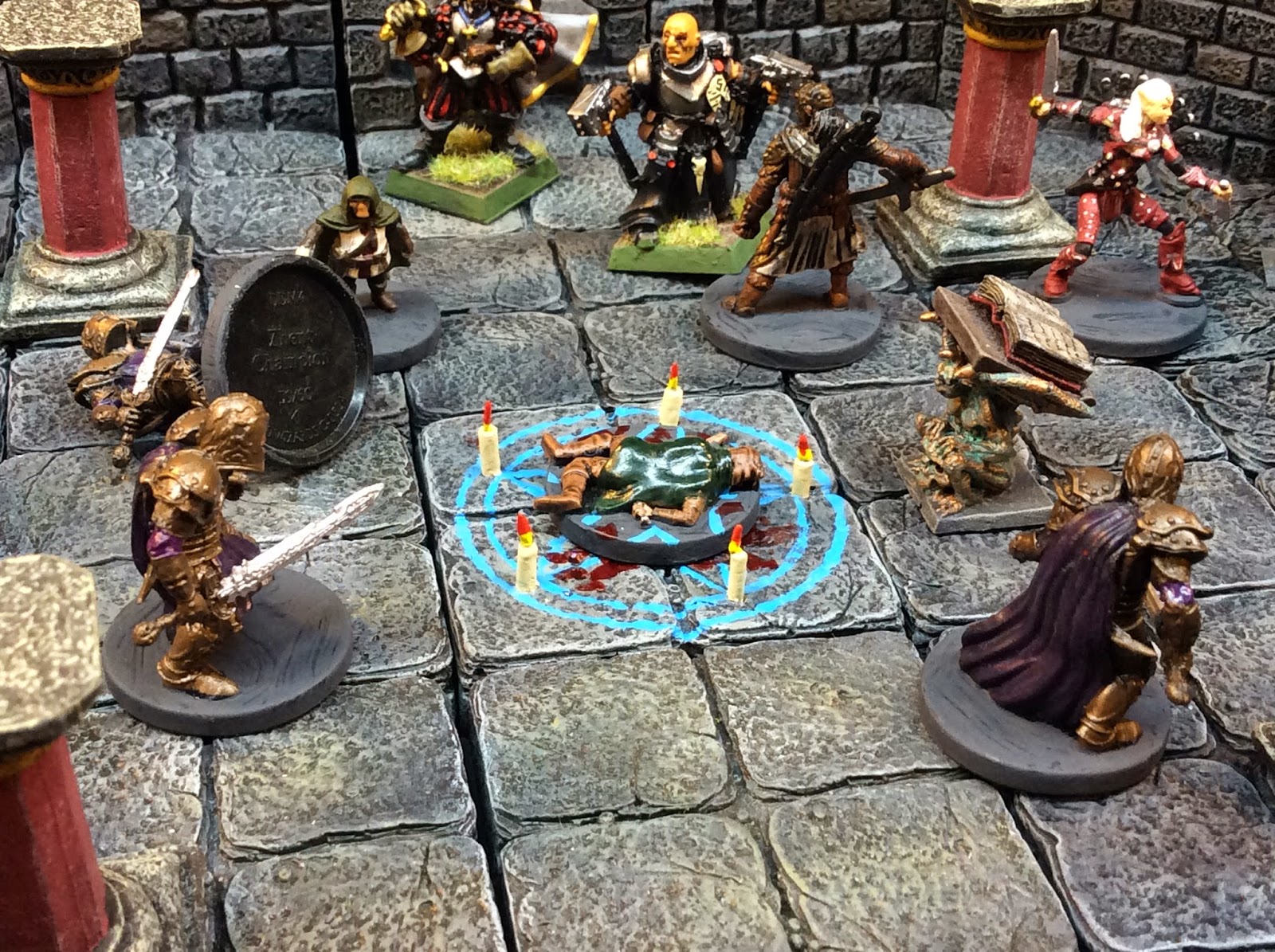 With the leader gone, the cultist dead, the party tends to Gunter who is alive but unconscious. They drag him back to town ahead of the storm and too the gratitude of the local lord.

In 3.5 hours, we got 3 characters rolled up, 2 of the players being complete noobs. We did 4 encounters and finished the adventure. Everyone had a great time. I like this new DnD. The new system flows well once you get a few key mechanics down. Now I have to do the hard part, dig up some more players.