Here’s a quick After Action report of the Fire & Fury game I ran Saturday.

As I posted before this was a “get reacquainted” with the rules game. I’m looking to run at Fall In so I used that as a scenario generator.

In the real battle Gen Rosecrans’s Army of the was having supply problems as Rebel Cavalry ran around it and destroyed/captured supply trains. So in this battle, Rosecrans sends McCooks Corps too seize a vital crossroads. He reinforces McCooks corps with a deteched division from Thomas’s corps. The Confederates having better cavalry detect this move and respond. General Braxton Bragg, sends a corps to intercept this Union attack. Maj Gen William Hardee races his corps to the crossroads. While a brigade of Wheelers Cavalry tries to hold on till they get help.

Rebel Cavalry Brigade(Wharton) starts on the table Union arriving on 3 roads, from the south and west Confederates arriving on 2 roads from the north Players can spend a turn off board and deploy their divisions and come on in the 2nd turn.
The Battle: 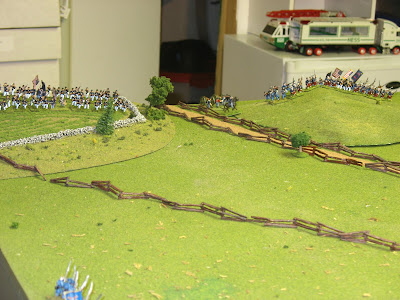 In the background you can see Davis and Sheridan's divisions forming up. Cleburn's Division is just coming out of the woods on the left of the pic(center of the table). In the upper right woods, Johnson's Division is visible heading towards Rebels under Breckingridge(upper left). 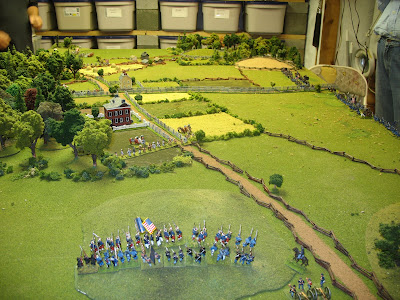 Davis and Sheridan's Divisions press the center. After the calvary was brushed aside. 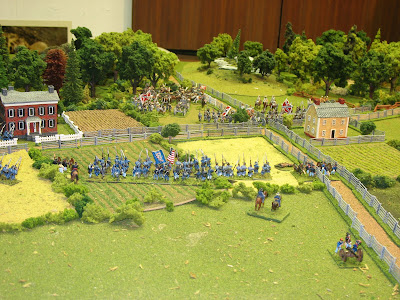