All Along the Watch Tower Pt 1


So cleaning up the basement the other day I came across the watchtower that comes in the BattleMasters game. I knew I had more. After 2 hours of searching, I found not one, but two more. I really need to stay off eBay at 2am. I was inspired to do something with them.

I didn't know what I would do, but something. Over a  few weeks or so I glued them together and got them painted up. During this time my friends and I have got back into Warhammer Fantasy Battle. Again digging through the horde of gaming stuff in my basement I found The Generals Compendium. A campaign source book for 6th ed. In it was a small siege scenario. 600 points of Attackers vs a tower and 300 pts of Defenders. Perfect, just multiply by 3 and we're good to go. 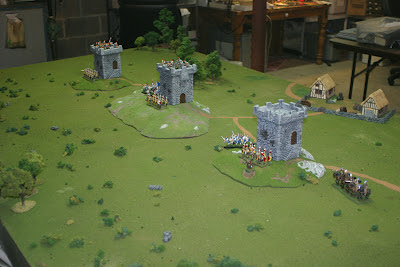 The Scenario: An attacking Chaos army needs to break through a chain of Watchtowers.
The Battlefield
-5x8 table
-3 towers spaced along the center of the board
-3 hills for the towers
The Attackers:
-3 separate, 600pt armies
-500 points(No lords, only Core troops)
-Stone Thrower(100pts)
The Defenders:
-3 separate, 300pt armies(one for each tower)
-200 pts (No Lords, Core troops)
-100 pts  (Relief force that will have to roll to come on)
The Rules: Warhammer 8th Ed, Siege Rules from 6th Ed

My buddy Lou scratch built 3 stone throwers and a battering ram. He is crazy good at scratch building. Me, I plan for 2 years before I start. 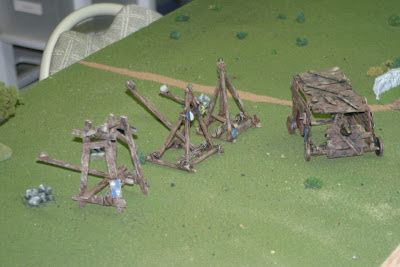 The forces of Chaos deploy. The deployment area is close to the towers, we are gonna get right into it. 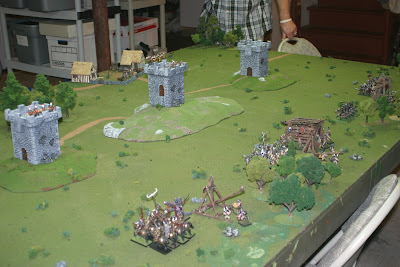 Chaos advances cautiously as Lou is uncertain what I have off table and the far tower has no troops on the top. 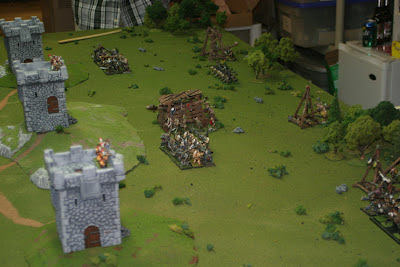 An early direct hit on the right tower kills 2 xbow. Thankfully I have more inside the tower firing from cover. I manage to kill one beastmen pushing the ram, but it continues to rumble forward. I get a kill on the right most Stone Thrower crew. 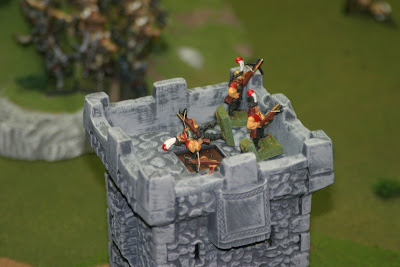 Turn 2 sees the Chaos tide rolling up to the towers. The Chaos general didn't realize he had to hit the door on the side of the tower. So he will spend some time getting into position. The right Stone Thrower misfires killing of the crew 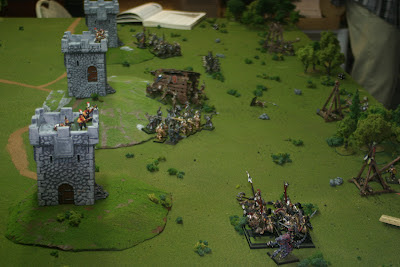 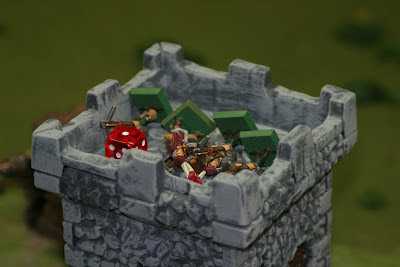 The first of my 3 relief forces arrive, 2 failed their rolls(Arrive on a roll of 4+ 2nd turn, then 3+, then 2+) It's my Pistoliers. They arrive on the left tower, to join a swordsmen unit I didn't put in the tower. I get a kill on one Marauder Light Cav. I also get a damage point on the battering ram. (7T, 5W) 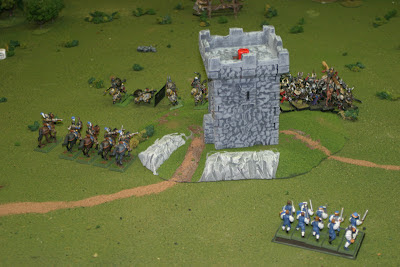 Turn 3 the Battering Ram is in position to charge, His Chaos Knights start to move across the table. I have nothing to stop them, but he can't attack the towers. The Chaos Warriors with a Log Ram, move into position to attack the left tower just in time to have a Stone Thrower deviate on to them killing 2! The Marauder Cav hurl Javelins at my pistoliers and kill one. A unit of Beastmen move between the center and right tower, not sure where he's going. 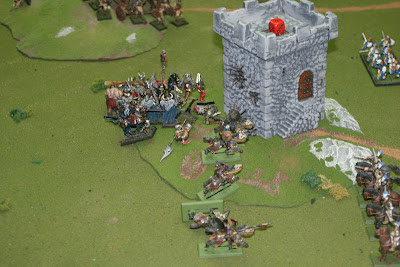 My turn 3 has another off table arrival. My 2nd Relieft force of 5 more Pistoliers(I love these guys) They swing to the right of the right tower. My xbow in 2 of the 3 towers continue to shower the enemy with their bolts. I get another Wound on the Battering Ram, and a wound on one of his Heroes that was galloping past the center tower. My 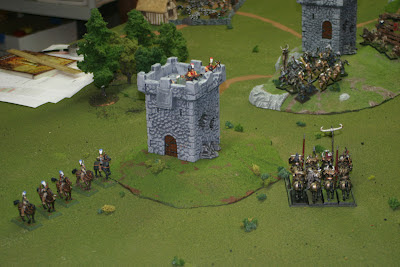 My first Pistolier unit on the left in a blaze of gunfire bring down 2 Maurader Cav. 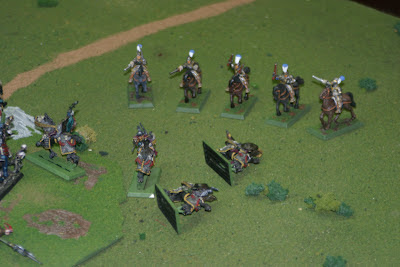 Turn 4 and we have a charge. The battering Ram charges the center tower gate. Does not cause any damage. His Chaos Warriors are lined up to charge the left Tower. Beastmen and Chaos Knights Move unopposed between the center and right tower. His Stone Throwers shift all their fire to the right Tower, as there are too many troops around the other tower and kill another xbow, causing one damage on the tower. (This is something I had not thought of when putting together the scenario, might have to adjust) He brings a mounted Chaos Sorcerer up to my Pistoliers on the left, but I dispelled her magic.(We have been having a magic phase, but we keep dispelling each others magic, which I prefer as I only have a Warrior Priest in the left tower.) 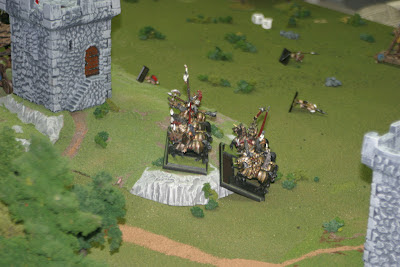 My last relief force arrives in the center, 20 Spearmen. They move into position to receive a charge from the approaching Beastmen. My Pistoliers on the left fail to wound the Chaos Sorcerer. I kill one Chaos Warrior about to charge the left tower. On the right, combined xbow fire from the tower and my pistoliers who moved up, manage to wipe out the last crewman from the stone thrower. I realize I have been doing the Warrior Priests Prayers wrong and cast Unbreakable on the troops in the left tower. 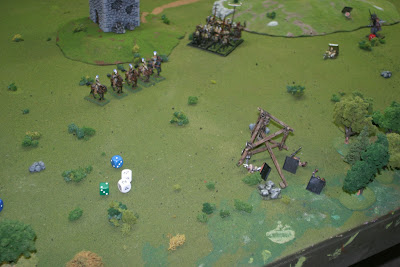 Turn 5, The Beastman unit in the center charge my spear unit. He slaughters me. 7 wounds to 1. I hate those guys. I break, get run down and are destroyed. The 3 remaining Maurader Cav decide to ignore my pistoliers and charge my Swordsmen in the flank, Cowards! Swordsmen kill one, and win the combat, but the Cav don't break. 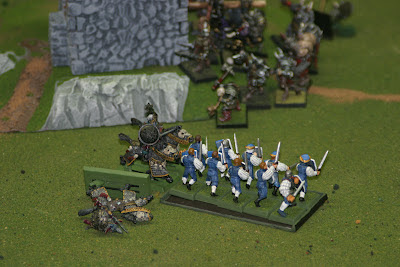 In the center the Battering Ram finally breaks down the gate. 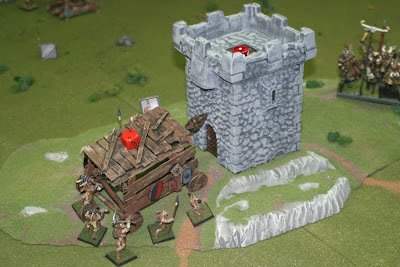 And the Chaos Warriors charge the left tower, but fail to cause any damage. 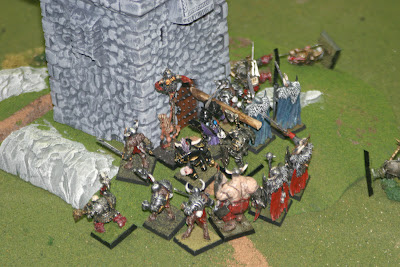 We had to stop there for the evening, we will pick up the action next week. Thanks for stopping by,